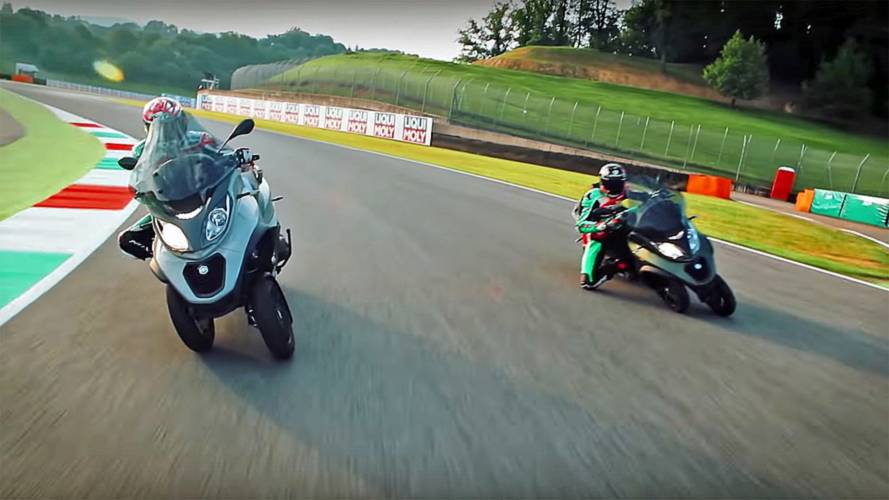 The music is fierce, the visors flipped-down, the pavement blurs and then it’s all quick, slick close-up cuts of Aprilia MotoGP track stars Aleix Espargaro and Scott Redding as they drag their knees through the corners of the Mugello circuit. The needle on the speedometer pushes past 90 km/h (56 MPH). The surprise? They’re on Piaggio’s newest MP3 500, three-wheeled scooters.

LEARN: Top 5 Reasons Why We Crash and How to Stop Doing It

The 2018 MP3 may have difficulty outperforming a motorcycle on the racetrack, but Piaggio’s “skilfully reinvented city transport” has a lot to offer. According to Piaggio, “ MP3 is able to satisfy a truly global demand: from drivers looking for a more practical yet safe alternative to the experienced motorcyclist able to appreciate the advantages and technical features of a vehicle that has, on its own, created a new market segment of which it is the undisputed leader.”

Though only the higher displacement models have been imported for the North American market, the single cylinder MP3 comes in many versions: the Yourban and Yourban Sport 300, an all-new 350 and the updated ‘Business’ and ‘Sport’ 500. The 2018 models have all-new styling, including updated screens and saddles and a new engine in the 500 hpe models that brings the hp up to 42 (in line with the Vitpilen 401, for example). The ‘Business’ model even includes a TomTom navigation system. The Piaggio also becomes the first of its kind to include ABS and ARS (Acceleration Slip Regulation), which increases traction control on the rear tire.

The MP3s offer lots of storage, stability and security, which make them ideal for commuters, as well as a healthy tank capacity—almost 14 liters including the reserve. And although they’re heavier, they tend not to offer as much torque as similar single-cylinder motorcycles and styling that might not be for everyone, it could be these specs that also make them better commuter bikes—making them more difficult to steal and harder to use for stunting.

Which brings us back to the video.

Italians know the value of fun, and what’s more fun than laughing? Listen carefully and you’ll hear that Piaggio might be poking fun of themselves on the soundtrack for the video with the lyrics: “You can’t fake it if it’s all you have” followed by “…give me something real!” And the racers blasting around the track are having a great time, even turning down the chance to take a lap on their own Aprilia racebikes in favor of another turn on the 3-wheelers, which does pique curiousity. Perhaps more (wheels) are better, after all.

Anyone else want to go for a test-ride on one of these #ordinaryspecial scooters?