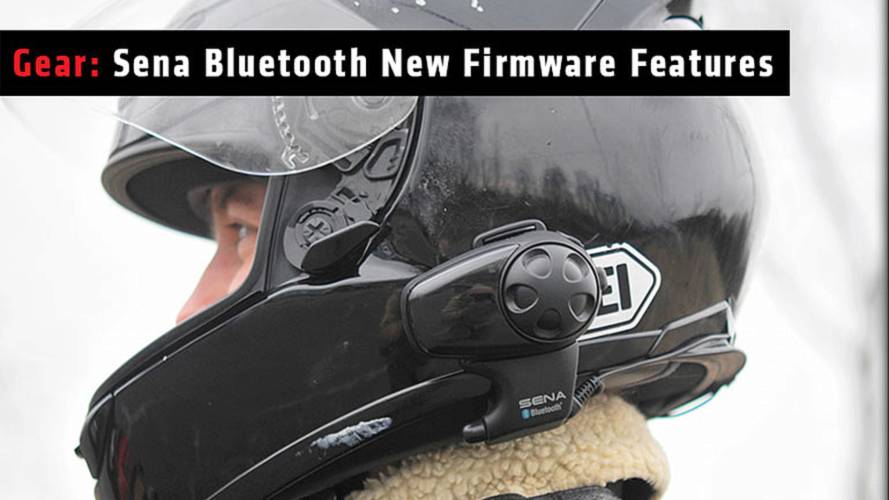 Sena Bluetooth recently released a firmware update for their SMH10R Bluetooth in-helmet communication device (the normal SMH10 received the update earlier this year). Through their updates, Sena manages to add features without actually changing the hardware.

This latest version— 5.0—is the best yet. The most surprising improvement is the Universal Intercom, which enables Sena headsets to hold intercom conversations with Bluetooth headsets from other manufacturers (that is, any headset able to pair with a phone and make phone calls over Bluetooth).

When I picked up my SMH10 and SMH10R a year ago, I was able to have intercom conversations with other Sena users, as well as connect to my phone over Bluetooth. That allowed me to hear GPS directions, listen to music, or make phone calls (I could even get speed-camera warnings). It was a great step toward making a motorcycle more like a car, but it was easy see how the experience could be improved. My first daydream:  I wanted to share music with my riding buddies so we could bop in unison as we cruised down the road.

Firmware version 4.3 granted my wish; it allowed Sena headsets to send music to each other. The update was easy to install—just download Sena's Device Manager and the new firmware file, then update the headset over a USB cable. Voila! I could finally share music over Bluetooth straight to the helmet of a riding buddy. Earlier updates added 4-way intercom, voice prompts, and 3-way conference calls between two-headset users and one person on a telephone.

From a recent email to Sena Users:

- Advanced Noise Control: It is equipped with wind noise suppression and intelligent Noise Gate in the intercom to limit the interference of wind noise and background noise while riding.

- Sidetone: If this feature is enabled, you can hear what you are speaking during an intercom conversation or a phone call.

I haven't yet had a chance to test out the new Universal Intercom feature, but it'll be a strong selling point for anyone wondering which Bluetooth intercom to buy. Simply put, with a Sena you should be able to talk to more of your friends than if you bought a different intercom.

Sidetone lets you hear your own voice during a conversation. Your helmet becomes an aviation headset and every ride gives you an opportunity to perfect your Chuck Yeager drawl.

This continual addition of features keeps Sena ownership fresh. Right when you grow accustomed to the current features, the devices gain new, stronger powers. What's next on the Sena wishlist? I'd love to be able to listen to music while talking to a passenger. Sena has thought of that too and calls it “Audio Multitasking.”  Firmware updates only take you so far, however, and music-backed conversations require different hardware. In this case, Sena's new state of the art 20S headset.