Watson On: To Ride Or Not? 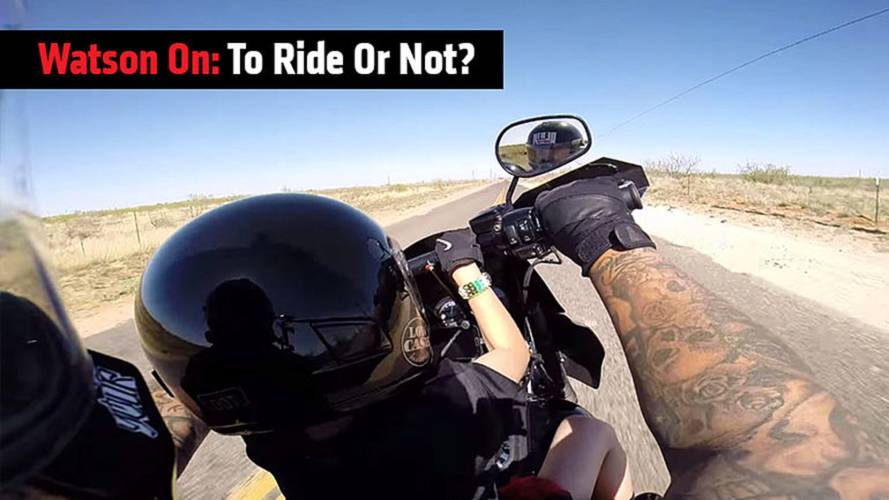 We raise the question of when is it too early for a child to learn to ride? Will you ever teach them? Should you?

In a few years time I have a decision to make. Should I encourage my son to take up motorcycle riding or should I leave him well alone and let him figure it out for himself?

It’s not going to happen any time soon. At the moment he’s more concerned with stuffing anything he can find into his mouth, making weird noises, eating and then passing out. But the questions are already starting to be asked amongst friends and family if, like his old man, is he going to ride bikes?

My wife is an understanding soul. She rides herself but has decided for the moment, and until the boy can fend for himself, she’s not getting back on a bike any time soon. When the time is right she’s told me and if he wants to ride she says she’ll support him. Until then my wife has to put up with a house littered with motorcycle parts, gear and paraphernalia that seems to follow me around getting larger every day.

When the subject of whether the boy should ride motorcycles comes up amongst friends, I can instantly see the disapproval written across their faces. The very fact that I would even consider allowing him a motorcycle is a very dangerous and rash decision to them. I can see them thinking just because I like motorcycles and ride doesn’t mean I should force this activity upon my son.

Maybe he’ll be like me and make his own mind up. At the age of 12 I pestered my folks for a bike until one day they finally couldn't stand the arguments any more and gave in. They told me if I went out and earned the money I could buy my first motorcycle. I did a host of menial tasks and chores for what seemed like years but was probably no more than a few months until I had enough cash to buy my first bike. I rode the crap out of it. I also fell off it a lot, hurt myself a lot, scared myself rigid sometimes but loved every minute of it.

Today, though, the world has changed. Unless kids are wrapped in cotton wool and every whim and desire is instantly catered for, you’re considered by some to be doing something very wrong as a parent. To my mind, kids should play outside, eat dirt and fall out of trees. They should also ride bicycles, build weird karts that may break an arm when the wheels fall off and just be, well kids.

On one hand I’d like the boy to ride. I’d like him to experience and understand what it is that makes a motorcycle special. On the other hand I don’t want to be the father that has matching gear and motorcycle and spends every weekend forcing a nervous and clearly unhappy child to ride a dirt bike just because his dad wants him to.

If the boy chooses by himself that he wants to ride motorcycle, I’ll help him of course. But I know without a doubt that some people aren’t going to approve. They may not say anything directly to me but I’ve already seen the incredulous looks when I’m asked if I am going to allow the boy when he’s older to ride a bike.

I have told these people of course I want to encourage him and if he likes motorcycles and wants to do it then that’s absolutely fine by me (and my wife). However, by the judgmental looks I get I might as well be saying that as soon as the boy’s ready I’ll be buying him a crack pipe and hooking him up with the local dealer, as that would be not nearly as dangerous and bad as riding motorcycles.

To be frank I don’t really care what people think. If I’m a bad parent for allowing my son to ride motorcycles then so be it.

Luckily, I haven’t got to rush into a decision any time soon. But I sincerely hope the boy like me has a passion for bikes and maybe I’ll nudge him towards riding to see if it’s what he wants to do. But ultimately it’s going to be his decision.

What do you think? Should kids be encouraged to ride bikes or allowed to find out for themselves?