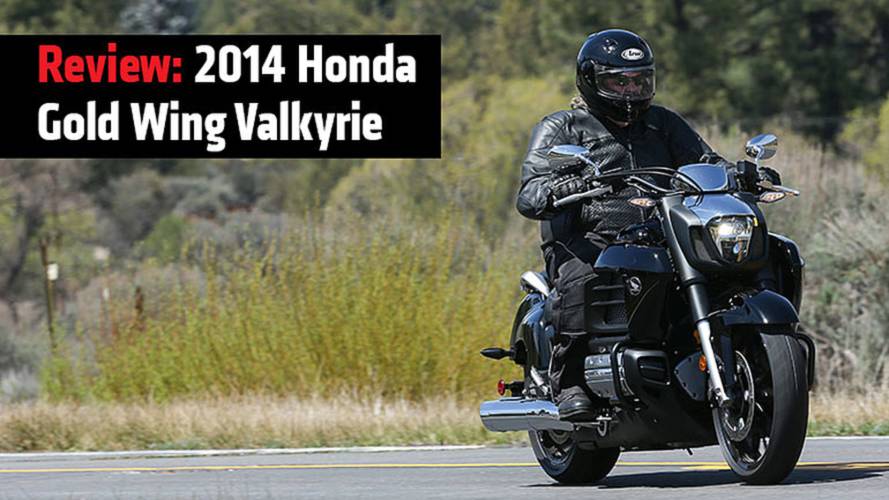 The 2014 Honda Gold Wing Valkyrie is back, lighter and meaner than ever.

The Honda Gold Wing has seen plenty of changes over the decades. The new 2014 Honda Gold Wing Valkyrie has gone on a diet in favor of better performance and its roller coaster ride throughout the years has culminated into an honest cruising machine.

Back when the earth's crust was still cooling, before touring motorcycles weighed 900 lbs, there was the original Honda Gold Wing. The year was 1975, and the Gold Wing GL1000 burst forth on the United States with a flat four engine and minimal bodywork—no fairing, no luggage, no extras —and weighing in at a svelte 584 lbs. The Gold Wing excelled at traveling in a straight line, and riders began strapping on Vetter fairings, accessory luggage and riding the highways. Honda noticed the trend, and in 1980, brought out the GL1100 Interstate, Japan's first factor dresser. The fairing, luggage and top box brought the weight up to 672 lbs. The unfaired GL1100 was still available, but was quickly fading in popularity. 1984 saw the arrival of the GL1200. The loaded Aspencade SE-1 trim level weighed over 770 lbs. 1985 was the last year for the GL1200 Standard – all Gold Wings were dressers.

The GL1500 arrived as a 1988 model, the first six-cylinder Gold Wing. It was a smash hit, even though it now weighed nearly 800 lbs. The new Gold Wing chassis was superior to the GL1200's, delivering handling that was surprisingly nimble in corners and in situations other than long straight hauls. Some riders began to fantasize about an unfaired version of the six-cylinder Gold Wing, and once again, Honda listened.

The first Valkyrie hit the streets in 1996. Sharing the GL1500's powertrain, but wearing cruiser styling and a hot rod touch with six individual carburetors and a modded cam. The Valkyrie cranked out over 100 hp, and weighed in at about 660 lbs -- well over 100 lbs lighter than the Gold Wing dresser. The Valkyrie lasted though 2003, with a few attempts to dress it up in Tourer and Interstate trim along the way. A limited edition model, the Valkyrie Rune, was produced in 2003 with the new GL1800 engine, impressing more as a styling exercise than as a viable motorcycle. The Valkyrie was laid to rest, but not forgotten.

In 2013, Honda expanded the Gold Wing lineup with the addition of the F6B, a streamlined, cut down version of the Gold Wing. The F6B still has hard bags, a fairing and full body work, but it is lighter, chopped down and more aggressive-looking than the traditional Gold Wing, appealing to younger buyers and competing with Harley-Davidson's popular Street Glide model.

Now, for 2014, Honda has come full circle. The new Gold Wing Valkyrie shares a frame, engine and transmission with the Gold Wing and F6B, but arrives without bags or fairing, and – most significantly – at 750 lbs wet (754 lbs with ABS), it weighs 90 lbs less than the F6B and over 150 lbs less than the full dresser Gold Wing.

Honda didn’t just strip the Gold Wing of touring dress and call it a Valkyrie. The new Valkyrie does share the Gold Wing twin-spar aluminum frame, 1,832 cc liquid-cooled fuel-injected flat-six engine and five-speed transmission, but just about every piece of bodywork is new and specially designed for the Valkyrie. Continuing the theme that was laid out with the CTX bikes (CTX700 and CTX1300), the Valkyrie looks long and low, with horizontal design elements dominating to give the impression of a low center of gravity. You can almost draw a straight line from the top of the headlight housing all the way to the back of the passenger seat, before the bike falls away dramatically to the rear fender. Seat height is a low 28.8”, and the bike is wasp-waisted, so inseam-challenged riders will have little trouble touching down at a stop. A 19” front tire and wide (180mm) 17” rear tire lend presence with 10-spoke alloy wheels and a single-sided rear swingarm. Dual front and single rear discs perform stopping duty. Full LED lighting provides visibility. Fuel capacity is 6.1 gallons, which should be good for over 200 miles of range, depending on how heavy your wrist is (EPA fuel economy figures haven’t been released yet). ABS is available only on the top trim level, Valkyrie ABS. There are just three colors of Valkyrie available at launch – Blue Metallic, Dark Red Metallic and Black, and the ABS trim level is only available in Black. I liked the Blue Metallic version best, because it comes with blacked-out engine covers and headlight surrounds (as opposed to the chrome ones on the Red and Black bikes), and so it looks a little meaner than the rest. Chrome slash cut silencers carry the exhaust to the back of the bike.

Honda describes the Valkyrie as a modern muscle cruiser, and the description fits. It’s closer in spirit and style to the outrageous Rune than to the original classic cruiser-ish Valkyrie. The hope is that riders who are ready to move on from their sport bikes, but not yet ready to commit to a full dress touring bike will see the Valkyrie as a sporty alternative to a traditional cruiser. It’s an interesting, carefully considered strategy on the part of Honda – one that will be tested in the marketplace.

I’ve always enjoyed riding the Gold Wing, but I have to admit that it’s just too much bike for me to want to own. It’s great when you’re touring, because the amenities are remarkable, and the performance is surprisingly good. The current Gold Wing handles really well on challenging roads, and is like a magic carpet on the Interstate. But jumping on the Gold Wing for a short hop feels like overkill and a bit of a chore, especially in traffic, where its bulk becomes apparent. The F6B addresses this to a certain degree, but still wears a fairing and hard bags – even if it wears them well.

The Gold Wing Valkyrie (that’s the official full name) feels like a different bike, despite all of the shared architecture. Losing 150 lbs has done wonders for the engine. Honda doesn’t report horsepower or torque figures, but the Gold Wing mill has been measured at close to 110 hp and lb-ft respectively, which is easy to believe. Power gets to the rear wheel via a five-speed transmission and shaft final drive. The throttle is mechanically operated – not electronic, as on many new bikes. Operation is seamlessly easy, with nicely weighted clutch pull and predictable power delivery. Honda bragged about the Valkyrie’s “raging bull” acceleration, and the image fits. When it’s this easy to get the power to the ground, rushing away from a stop is addictive and intoxicating. The bike’s wheelbase is so long (67.2”) that there’s little worry of lifting the front wheel unintentionally – it’s not that kind of hooligan bike. Valkyrie is more more muscle car than exotic.

I rode the Valkyrie back-to-back-to-back with a Gold Wing dresser and an F6B, over varied roads from Interstate to city streets to back roads and canyons. The lack of wind protection is a drawback on the highway, but the bike is dead stable on a long straight road. It is still heavy in traffic, and a little ponderous to park, but it is just narrow enough for a bit of lane sharing out here in California, where it’s legal. I wouldn’t try that on a Gold Wing (most of the time). On back roads and through the twisty stuff, the Valkyrie is fun and maneuverable, willing to change direction and lean into curves. I wouldn’t describe it as “flickable,” but it doesn’t fight back in a switchback. The ample power makes light work of hills and the wide gear spread and flat torque curve helps to minimize the need to change gears. You can ride the Valkyrie sedately and have a nice cruise; then you can open up the throttle and give it a good flogging and have a fun romp. The exhaust note is just throaty enough to encourage you to make it roar, but not so loud as to be obnoxious.

Valkyrie starts at $17,999 in Blue Metallic, Dark Red Metallic or Black. Valkyrie ABS starts at $18,999, and comes only in Black. The ABS version also gets self-cancelling turn signals. The full dresser Gold Wing starts at $23,990 and the F6B starts at $19,999, so there’s a considerable savings there. Honda is preparing a full line of accessories for the Valkyrie, including touring accouterment like bags and wind protection, which opens up the possibility of putting together a basic touring rig that could be stripped back down for daily duty. Interesting.

At this price point, there are a lot of bikes to compare to the Valkyrie. Harley-Davidson’s V-Rod, Yamaha/Star’s VMAX, Suzuki’s M109R and Ducati’s Diavel come to mind immediately, each of which put their own spin on the muscle cruiser in a similar price range.

Will the new Valkyrie pick up new fans, though? Will sport bike riders really see it as a way to escape the crouch without giving up the thrill? Time will tell. Anecdotal evidence has maturing sport bike riders moving toward adventure bikes like the BMW GS and Yamaha Super Tenere, not settling down into cruiserdom. Still, the new Valkyrie is a very appealing, fun-to-ride muscle cruiser that should build a fan base all its own.