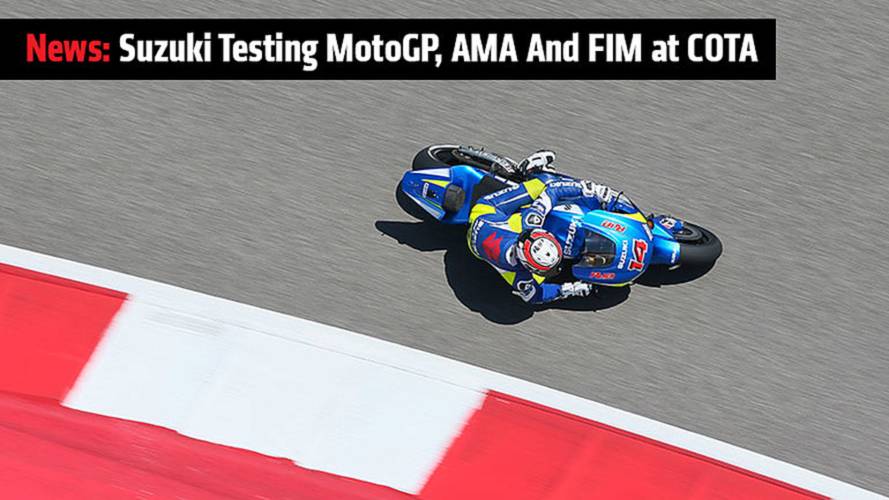 Suzuki headed to Austin, Texas for some serious track testing at the world famous Circuit of the Americas.

Following the first American round of the 2014 MotoGP racing schedule, Suzuki took over the pristine racing circuit in Austin, Texas known as COTA (Circuit of the Americas) for a very unique test day.

The manufacturer maximized its utility of the track as it assembled its fleet of top talent and equipment for a very diverse testing day including representatives from AMA, FIM and even MotoGP. Everything from bone-stock GSX-R1000’s to the name-less MotoGP prototype were exercised at this special Suzuki combine.

The Yoshimura Suzuki Factory Racing group sported their arsenal of AMA-spec GSX-R1000 race bikes piloted by the likes of Martin Cardenas, Roger Hayden and Chris Clark. Additionally, Austin-local and MotoGP legend Kevin Schwantz was brought out along with his 1986 Yoshimura teammate and Japanese Superbike champion Satoshi Tsujimoto to run testing on the GSX-R1000 in preparation for the 2014 8 Hours of Suzuka endurance race. The most mysterious participant however, is the team testing Suzuki’s all-new MotoGP proto-type machine set to enter competition next season. Kevin Schwantz was recruited to this side of the pits as well to run the new machine through its paces with other Suzuki test riders Randy DePuniet and Nobuatsu Aoki.

With the next AMA round still over a month and a half away, team Yoshimura Suzuki had plenty of time to dial in their GSX-R1000’s as well as get the riders ready for the Superbike Shootout event that took place in Fontana, CA over the weekend. This was a unique chance for all riders with a broad range of resumes and equipment to dice it up and learn from each other. In fact, Roger Hayden was able to click off his hottest lap of the day chasing down Schwantz as he trained for the 8 Hours of Suzuka event to represent the Yoshimura Legends team with Tsujimoto later this summer on July 27th. Schwantz was also splitting his duties with the MotoGP development team as they formulate the successor to the GSV-R race bike that was retired in 2011. The prototype is shaping up to be an extremely threatening contender putting Suzuki on track to rejoin the MotoGP ring after its 3 year hiatus.

The historically-dominant Suzuki has its sights set on being back on top of the MotoGP, FIM and AMA podiums next year and this exclusive testing day brought it one step closer.