Inside Look: The 2014 Fieldsheer Catalog 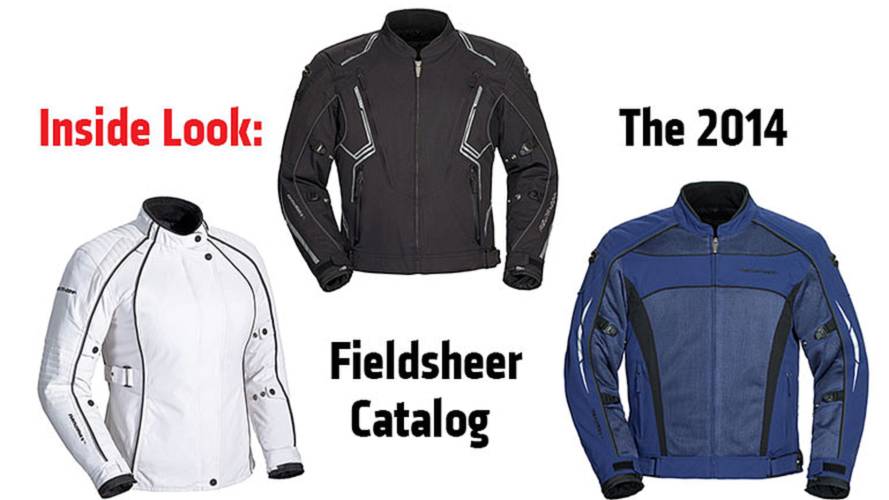 The 2014 Fieldsheer catalog is packed with new gear, improved material and a wider selection of styles and sizes for men and women.

One of the top motorcycle apparel company’s in the U.S., Fieldsheer, has just announced its 2014 range of motorcycle gear that promises better protection, sizing and style and the adoption of a completely new, high tech lining material with improved weather protection and rider comfort

At a launch event held this week in Los Angeles for the motorcycle media, RideApart was given the run down of the Milwaukee’s company’s 2014 motorcycle gear collection and shown its new Nanomax material designed for garment linings that has been developed and manufactured entirely in house.

Fieldsheer says that its newly patented Nanomax exceeds U.S. military extended cold weather clothing specification and is the first advanced nano-porous membrane to be used in motorcycle gear. What that basically means is that the pore size in the lining material is as small as 0.03 microns making it both highly water resistant and breathable. Nanomax is, according to Fieldsheer, water repellant, quick drying, flexible and light with a multi-layer structure and will retain warmth even in wet conditions.

Joe Parr, VP Global Sales for Fieldsheer, said: “ We are very excited about this new product, as not only is it something Fieldsheer has designed and developed, but we also think it is significantly better than anything our competition is currently offering.

“Nanomax has very high hydrostatic resistance (water-proof), high moisture vapor permeability, excellent air permeability and is flame resistant. The membrane can breathe at any temperature and humidity which gives better comfort to the wearer.”

“It also has good mechanical strength, making it abrasion resistant, and has high contamination resistance to oils, sweat and detergents. It can also withstand repeated washings and use as Nanomax will withhold a high level of hydrostatic pressure.”

The first questions are going to be is this any good and what are the benefits and does this new material really make any difference? Well we can’t tell you that yet as we didn’t get to test any of the 2014 Fieldsheer range we were shown, as this was just the introduction launch. But we plan to get our hands on several items in the very near future.

Until then you can take a look at the 2014 Fieldsheer Collection, which includes some well thought out designs with the company saying it has listened to its customers and is now offering a more comprehensive size range with S to 4XL for me and XS to Plus XL for women.

It has also adopted CE-approved Stage One removable armor in the shoulders, elbows and back for all of its 2014 jackets and a greater choice in colors.

First off and priced at $439.99 is the Adventure Tour Jacket for both men and women. Available in four colors (the Royal Blue/Silver combination was particularly eye-catching), it has a 500-denier Maxtena-Pro outer shell, removable CE armor and SP Memory Foam in all of the impact areas. There’s a Nanomax liner and four-step adjustable sleeves to allow the wearer to choose the optimum fit and reflective Phoslite in the front and back panels for high visibility. There’s also a ton of storage on this jacket with front pockets, two chest pockets, a zippered map pocket and two inner pockets.

The Adventure Tour pants (available in black/silver, silver/royal blue and black/black) cost $329.99 and have an abrasion resistant 500-denier Maxtena-Pro shell with a 1680 denier ballistic in the seat. The Nanomax liner in the pants, like the jacket is removable, has CE knee armor, SP Memory Foam at the hips and upper thigh and heat resistant material in the inner thigh. Fieldsheer has also included a full-length leg zipper with Velcro for a tight fit.

Also new for this year is the Sugo Jacket ($332.99) that has all of the technology and safety features of the Adventure Tour range but includes Carboflex panels in the back and shoulders for better wearer flexibility and reflective Phoslite piping for better nighttime visibility. Two colors only for this range black/silver and black.

For a few bucks less at $329.99 is the Shadow Jacket. It has the same safety features and material technology but slightly different style with the choice of four colors (black/high-viz, royal blue/silver, black and gun metal/silver) and a lot of pocket space.

For the rider that wants a more discrete look there is the new Supersport Jacket ($299.99) available only in black but with Phoslite reflective piping for nighttime visibility, Nanomax lining and a Maxtena-Pro outer shell with 1680 denier ballistic at the shoulders and elbows.

For 2014, Fieldsheer has developed a fairly comprehensive mesh jacket for warm weather riding for both men and women ($299.99). It uses Polytitanium mesh with 500-denier Maxtena-Pro in the high impact areas. Called the High Temp Mesh Jacket it too has CE stage one removable armor in the shoulders, elbows and back, is waterproof and has the new Nanomax material liner and Rainguard barrier technology, so is both waterproof and breathable.

Complementing the mesh jack are High Temp Mesh pants ($279.99) available in black or silver in both men and women’s sizes and comes with all of the safety and technology features that Fieldsheer has introduced for 2014.

Fieldsheer was keen to point out at this introduction that it has spent a lot of time working on correct sizes for its apparel for both men and women to make sure there is a good, comfortable fit. It has also gone one step further and developed a jacket specifically women riders called the Lena 3.0. Priced at $259.99, the Lena Jacket say Fieldsheer was designed by a woman for women riders. It carries all of the 2014 Fieldsheer safety and technology features and is available in white/black, silver/black, royal blue/black and black.

As a further extension to its 2014 Collection, Fieldsheer is also has a range of six different gloves that al feature a ‘mobile touch’ feature that allows the wearer to use a touch screen. Available in six distinct styles, in either goatskin leather and man-made materials with cowhide trim, prices start from $40.99 for the Sugo Glove and rise to $131.99 for the Legend series.

We’ve been big fans of Fieldsheer gear for some time not only for the quality it offers but also for the continual innovations it seeks to introduce each year. It’s an American company designing its own gear with its own patented technology here in the U.S. with some well though out design and styles for its 2014 line-up.

Its new 2014 collection shows that it has listened to its customer base and has developed the new line accordingly. Is it any good though? The proof will come when we get to live with some of this gear on an everyday basis in the next few weeks. We’ll keep you posted on what we discover.

In the meantime for more information about the 2014 Fieldsheer Collection go to its website at: www.fieldsheer.com