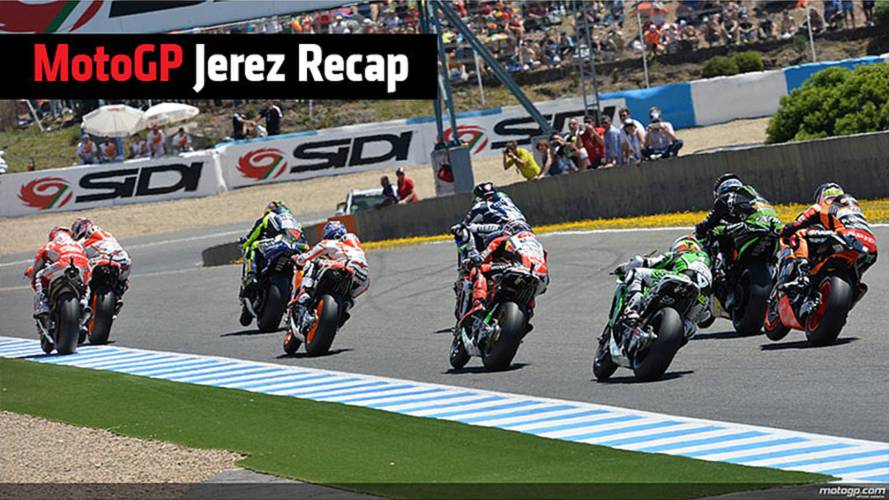 MotoGP raises the bar in Jerez, Spain for some wonderful racing.

: MotoGP invaded the Spanish paddock at Circuito de Jerez this past weekend to mark round 4 of the 2014 MotoGP season.

Race day conditions in Spain seemed ideal at a balmy 82 degrees Fahrenheit but track temperatures danced around 120 degrees, which forced teams to make their tire selections cautiously. The front runners on the grid went with medium Bridgestone compounds front and rear with only Valentino Rossi going with a hard front tire. With eight Grand Prix wins here at Jerez (six in the MotoGP class), Rossi has his strategy dialed in at the Spanish circuit. His main challenger was Marc Marquez who has never won at Jerez in his 99 race Grand Prix career. If Marc managed a win out the weekend, he would be the first rider since Mick Doohan in 1992 to win the first four races of a MotoGP season.

Grid positions did not produce many surprises with Marc Marquez and the Repsol Honda RC213V sitting on pole after setting a MotoGP lap record for Jerez in qualifying with a 1:38.120. To his right aboard the Movistar Yamaha YZR-M1, Jorge Lorenzo hoped to grab some luck from his 27th birthday and 200th Grand Prix race in order to set the record straight with Marquez who made an aggressive final-corner pass on Jorge one year ago. The 2013 Jerez race winner, Dani Pedrosa, sat on the third grid position on another Repsol Honda RC213V rounding out the first row.

When the red lights went out in front of a crowd of over 117,000, Lorenzo struggled with his start producing a very uncharacteristic launch and allowing Andrea Dovizioso to take the holeshot on board the Team Ducati GP14 machine. However, Marquez took the lead by the second corner with Rossi jumping ahead a few turns later. Marquez and Rossi traded places in the top spot multiple times in the first lap setting the stage for a great first place battle. However, it became apparent, very quickly, that this was not going to be the case. Marc put over two seconds between himself and Rossi with 21 laps still to go, over three seconds with 18 to go, four with 14 to go and five with eight to go.

After a few quite seconds down the track, the battle for second place began to heat up as Pedrosa overtook Lorenzo for third place with 7 laps to go setting his sights on Rossi. Dani was all over Rossi on the final lap in an attempt to steal second but Rossi held strong perhaps due to his harder tire selection holding up by the end of the 27-lap race. Karel Abraham learned this lesson the hard way binning his Honda RCV1000RR when his soft compound tires gave up on him with 8 laps to go.

Marquez’s lead was reduced to less than a second and a half by the time he wheelied through the checker followed by Rossi, Pedrosa then Lorenzo. Dovizioso, Alvaro Bautista and Aleix Espargaro occupied the next three positions after their 27-lap heated battle for 5th. After the race, the top of the points standings did not change much with Marquez sitting on a comfortable 28-point lead ahead of Pedrosa, Rossi, Dovizioso and Lorenzo in second through fifth respectively.

Round 5 is set for May 18th at the French Le Mans after a bye week. Last year, the weather conditions were less ideal than these beautiful Spanish conditions forcing the riders to dice it up in the rain resulting in Marquez on the third podium step. Marc will have two weeks to prepare before his 2014 winning streak will be challenged once again by a field of previous champions and rising young guns.