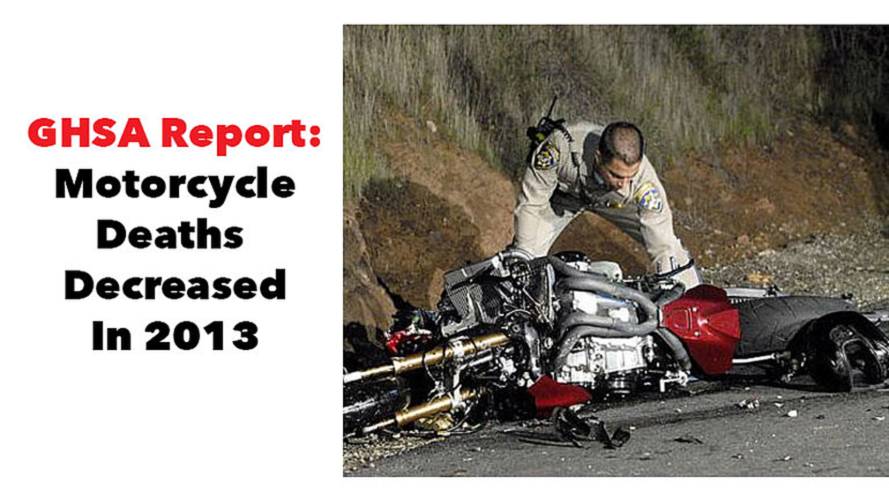 The latest GHSA report finds that motorcycle related deaths have dropped in 2013.

The Governors Highway Safety Association (GHSA) released a report yesterday with good news about the state of motorcycling in the United States: "For only the second year since 1997, U.S. motorcyclist fatalities are projected to decrease in 2013, according to a new analysis of preliminary state data." The report is called "Spotlight on Highway Safety," and it was prepared for the GHSA by Dr.

James Hedlund of Highway Safety North, former Chief of the Mathematical Analysis Division at the National Highway Traffic Safety Administration's (NHTSA) National Center for Statistics and Analysis (NCSA). Which is to say, there was a smart guy who was very good with figures behind all this.

There are several big takeaways from the report that are very positive. Overall, it looks like motorcycle fatalities declined by 7% in 2013. Further parsing that figure, fatalities increased in 13 states, while decreasing in 35 states plus Washington, DC. There was no change in the remaining two states, if you're doing the math carefully. In pure numbers, there were 4,957 motorcycling fatalities in 2012, and it looks like there were 4,610 in 2013. Even in these high-tech days, there's a bit of underreporting and data adjustment that goes on when tallying results, which is why even at this point in the second quarter of 2014, the figures for 2013 are still qualified as estimates.

When the GHSA report starts to come to conclusions, I'm reminded of the quote most often attributed to Benjamin Disraeli: "Lies, damned lies and statistics." Not that there's any overt obfuscation from the GHSA, just that there's a definite point of view, and the stats are used to illustrate it, when it would be possible to emphasize different stats or even different opinions to support a contrary, more motorcycle-friendly point of view. What we have always known is still true: Motorcycling is a risky endeavor. And when confronted with risk, government's reaction is to limit or eliminate it.

The study concludes with several recommendations that government can take to further reduce motorcycle fatalities:

I consider it of note that of the six recommendations, five point fingers directly at motorcyclists, and only one considers that there might be some solutions that involve everyone.

You can read the complete GHSA report (just 23 pages, including 3 pages of references) on the GHSA website at http://www.ghsa.org/html/publications/pdf/spotlights/motorcycles_2013.pdf.

What do you think? Does the GHSA have a point with its recommendations? What other actions, if any, would help to further reduce motorcycling fatalities on U.S. roads?