Noob In The Box 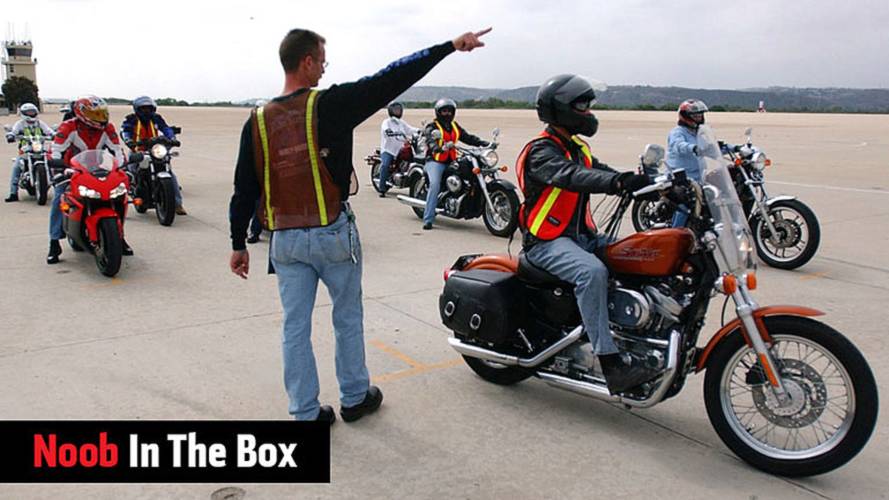 When you're a noob riding a bike can be intimidating or motivational. Jason Avant take us through what nearly every noob rider feels when you finally twist the throttle.

Looking back on it, it was watching a guy die in a motorcycle crash that made me want to become a biker.

That’s not entirely true. I’m still not sure if the guy actually died. This is what happened: I was a sophomore at San Diego State, and was crossing the bridge across Montezuma Road to get to my dorm when I saw him. He was on a sportbike, the kind that your mom thinks of when she tells you how dangerous “those things” are – and he was coming up the street in a hurry. The road curves under the bridge, and that curve ends at an intersection, and if you’re on a bike that’s whipping through that turn at well over 60 miles per hour and the light – the one you can’t see because it’s around the bend – is red, your instinct, assuming you’re not an experienced rider, is to pull the front brake. Hard. A Panic Stop. An experienced rider would squeeze the front brake (right hand) while stepping on the rear brake (right foot), and he’d do it smoothly and slowly because as has been proven time and again, if applied correctly motorcycle brakes do a really good job at stopping a motorcycle without flinging the rider from the seat.

Perhaps the guy was an experienced rider. Maybe he’d done this particular curve at 90 many times over. Or maybe he’d never done it that fast but was in a hurry – late for a final, on his way to the frat house for an important meeting. The bike was a beast – I didn’t know anything about motorcycles at the time, but the scream of the engine told me that Fast was relative, that this was a machine that with just the slightest flick of the wrist would go from zero to 120 in a matter of seconds. 60 miles per hour wasn’t particularly fast for this bike, in the great grand scheme of things. It was built for speed. It was also built for riders who knew how to handle such speed. He saw the line of cars stopped at the light, and got the first part of a hard brake in a turn right: he straightened the bike, which was at a wicked angle, leaning as it was into the turn. Then he made his mistake: he pulled that front brake hard, the front end of his bike dove as the suspension collapsed under the enormous stress of G’s, and off he flew.

He actually flew. Through the air, in a straight line about three feet off of the ground, as his bike slid down the road. I remember it was a quiet thing to watch; lovely, in a way. There was no sound; my brain had simply stopped processing everything but the sight of him. He flew through the air, head first, looking like a hero from a Marvel comic book in his red leathers and matching red helmet. Then he arrowed head first into the side of a parked car. There was a loud crunch. I gagged down a mouthful of vomit. The bridge ended at the dorm parking lot; there was a SDSU Campus Police car parked there. The officer inside was reading a copy of the Daily Aztec. “Excuse me”, I said. “There’s been an accident right under the bridge. Bad one. Guy on a motorcycle…” And that was all I got out, because there must be something reflexive when one is a police officer or paramedic and the words “motorcycle” and “accident” are heard. The cop hit his lights and sirens and rolled. I walked back to the dorm, shaken by what I’d seen. I never found what happened to the guy.

Some twenty years later, I’m astride a Kawasaki Eliminator 125 on a hot summer day. I’ve been a motorcycle rider for exactly one hour and 35 minutes. The bike looks beefier than it actually is; the “125” refers to the bike’s engine, a 125cc air-cooled, four-stroke single-cylinder powerplant that’s perfect for beginning riders. It’s a little after noon on a February; the Costa Mesa sun is out, and I’m thanking God that I’m not doing this in, say, June. I’m in jeans, high workboots, an Under Armour long-sleeved compression top worn beneath a heavy flannel shirt, armored motorcycle gloves, and (of course) a helmet. My iPhone tells me it’s 70 degrees. I’m sweating like an overweight offensive linemen on the first day of practice. The heat isn’t overwhelming, but it’s enough to be a distraction, and distractions are not good when learning the nuances of riding a 320 pound motorcycle. And nuance is what this particular part of my first day of motorcycle riding lessons is all about.

My next task sounds simple enough: there is a rectangle painted on the tarmac, it’s 20 feet wide and 40 feet long, and to pass the Motorcycle Safety Foundation’s Basic Rider Course I and everyone else my class have to execute two linked U-turns within it.  The instructors refer to it as The Box, and if it sounds like something that Steve McQueen would find himself sweating away in after yet another attempt to escape from Stalag Luft III…well. There are five other riders in my BRC class, some noobs, some with years of experience, and after a few rounds of slow, counterweighted turns, fidgeting with our throttles and clutches to maintain enough speed to keep ourselves from dropping our bikes while swearing under our breath, we’re all thinking the same thing.

When I ask John Leahy, one of my Rider Coaches at Mission Viejo’s Saddleback Rider Training school, which part of the course riders have the most trouble with, he laughs, because he knows what I’m thinking. “The U-Turn Box makes new riders crazy. And a lot of experienced riders find it tough.” As he tells me this, Chuck – an older, bald Harley rider with a Sam Elliot mustache begins arguing with one of the MSF instructors. “This ain’t how I learned to do a U-turn, and I been ridin’ for twenty years”, he grumbles. The instructor politely reminds Chuck that the methods the MSF teachers use are time-tested, and are used at every MSF school in the country. Chuck remains unconvinced, even after he drops his bike attempting to make his turns inside The Box.

I roll up to the starting point as Chuck exits The Box in defeat. Oddly – or perhaps not – I’m thinking of the guy from that crash I witnessed. I think about what’ll happen to me if I twist the throttle just a bit too hard, or if I forget that that the clutch is on the left and the brake is on the right. I’m twice as old as the youngest student in the group, and I’m learning how to ride a motorcycle. What I won’t know yet – what I will experience soon enough – is not only how much fun it is, but how oddly relaxing riding feels, how quiet everything becomes, when every sense is focused on the tasks at hand, shifting, turning, braking.  It occurs to me that I want to not merely learn how to operate a motorcycle – I want to become a motorcyclist, to not just do those things that bikers do, but to do them exceptionally well. To not end up like the guy I saw crash those twenty years ago.

The instructor tells me to go. I twist the throttle, and ride.