Why MotoGP Is Formula1 On Two Wheels 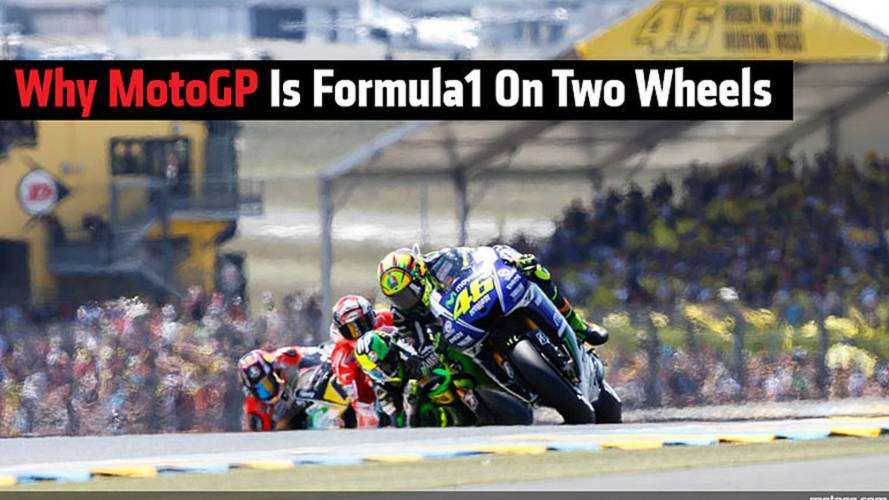 MotoGP is a tired and tested formula for precision handling, team organization and most of all the riders that garner global attention. Better than Formula1?

The battle between Formula1 and MotoGP as to which racing series is more elite has been a long and passionate fight. Fans, drivers and riders have held MotoGP as an equal rival, and here are some reasons why.

Just as Formula 1 attracts the best talent, and is responsible the biggest names in auto racing, MotoGP brings together the best motorcycle racers in the world. Outside of the US of A, where names like Jimmie Johnson sound like a cruel parody of American culture, F1 drivers are the biggest names in racing and even within the states, names like Vettel, Alonso, and Raikkonen are practically synonymous with racing. Likewise, anyone with a passing interest in motorcycles has probably heard of Rossi, Hayden, and Lorenzo. And in case you think the star power is undeserved, think again, MotoGP bikes are the gnarliest of the gnarly in terms of power, performance, and handling.

A MotoGP bike is the most extreme road racing machine on two wheels, bar none. An inline 4 cylinder engine displacing 1000 CCs may sound on paper a lot like your buddy's liter bike, but these pure-bred race bikes can make over 250 horsepower and weigh around 360 pounds. This adds up to a 0-100 time of around 5 seconds, and in fact, a MotoGP bike's superior aerodynamics when compared to the high-downforce setup used by most F1 cars, means they hit the highest straightaway speeds of any racing class that doesn't run solely the quarter mile.

An F1 pit crew is a seriously professional team, and each pit stop can involves 15 or so crew-members who can change four wheels and fuel a car in just a couple of seconds (on a good day like Ferrari did in 2013). While a MotoGP race doesn’t usually have any pit stops - they’re permitted, but unusual - the team still plays a critical role in the race with several mechanics and technicians each with a specific job monitoring telemetry, suspension, or tires.

MotoGP and Formula 1 both move together from city to city during the race season, and an immense amount of logistics go into transporting crews, machines, and support staff around the world from March to November each year with races taking place every other week. Each organization owns a fleet of private transport planes to ship vehicles and equipment to tracks which aren’t accessible via team trucks on the European continent.

Formula 1 cars are one-offs produced especially for racing, and while a MotoGP bike is a lot closer in form factor to it’s production cousins than an F1 car, the Honda RC213V’s design is just as specialized as that of the Redbull RB10. The rules which dictate the specialized machine’s specifications are called the Formula, and they dictate engine displacement, configuration, and redline, weight, size, and a host of other factors. To prevent cheating, all F1 cars are required to run the same engine control unit and MotoGP similarly requires the use of a standardized ECU from Magnetti Marelli. Contrast this to ‘production-based’ racing classes like World Superbike or even DTM where homologation is required to make a car eligible for competition and it becomes clear why MotoGP really is the F1 of bikes.

All of that and the fans.