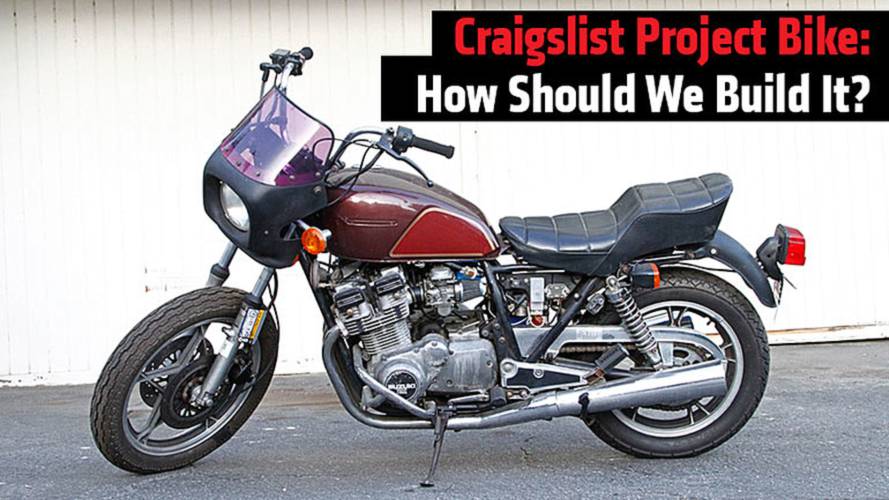 We picked it up out of a side garage in Salinas, California from Jeff Gillogly who bought it while stationed in Germany. An Airman took the bike on a test drive and dropped it, so he was forced to buy it. He later left Germany and gave it to Jeff. Immaculately maintained, the bike was stored in his parent’s garage for over six years. While he owned the Suzuki he had swapped front ends, wheels, exhaust and more, leaving a ton of extra parts for us, including a service manual.

We have an advantage with this Suzuki, it's not a Honda 750, Norton, or Triumph, but rather a bike that's old enough to be cheap, but not old enough to be valuable or represent a piece of motorcycling history. Tons of them were made so parts are easy to find and cheap, and no one will care if we mess it up. Now, we need to make sure the bike is worth the effort.

Cranking the Bike for the First Time

First we picked up a cheap battery for $40 to make sure the bike was salvageable and we didn’t have give-up problem, like a spun bearing or cracked block. First, we took the old-man remedy and put Marvel Mystery oil in an old glass-cleaner bottle and sprayed it inside the carbs and down into the cylinders. We replaced spark plugs and a fuel filter before adding gas and more Mystery Oil in the tank. We took WD-40 and sprayed all moving parts like throttle linkages and clutch cables. With no spark plugs in, we placed the bike in high gear and rolled it back and forth, slowly spinning the motor, spreading the oil on the cylinder walls.

We made sure we had good oil and plenty of it and make and then hit the start button. She fired right up, but when revving under load the bike fell on its face and struggled for fuel. As we guessed the carbs were clogged and gummed up.

Parts are still available for this bike like carb rebuild kits which retail for $14-$30 each from guys like PartsNMore.com. We didn’t want to crack them open if we didn’t have to. We found Marine De-Carb from a local Marine Supply store. It was pricey at $20 for the can, but worked wonders. Spraying in the carbs without air cleaners and the bike running, it foamed like shaving cream, fumigated the neighborhood, and cleaned the gummed up carbs. It still had some hesitation though. With aftermarket pop-on air cleaners the bike was getting too much air, leaning it out. We covered half the air cleaners–a trick we learned from an old 750 mechanic— and the bike runs great now, no major noises, and idles perfectly as the carbs appear to be synced.

Now the bike is ready to ride for only $260… well, almost ready. The turn signals are broken, seat doesn’t have a mounting bracket, and the wiring is a mess. But it’s mechanically sound and ready to go under the knife. How should we build it? Here are some options:

This is the author's least favorite idea. There were plenty Suzuki 750s made and it's not old enough to be a classic yet. According to Craigslist and eBay the absolute max value of our bike fully restored would be $2,000 and that's probably after investing $1,800 into it. The bike isn’t necessarily a piece of Suzuki history and no one will hate us for chopping it up.

A Honda or smaller bike (because those are cooler at the moment) might make for a better project. A Honda would have more parts available and gain more street cred when completed. The plan would be get the Suzuki running, registered, and put it on Craigslist.

Ultimately, similar to the restoring it option, we risk making a few hundred bucks profit. And besides, we're here for fun, riding, and experimentation, not money.

Just the name peaks our interest. It's a 30-day, $1,000 or less biker build off. Gentlemen’s honor, you cannot work on your bike but 30 days before the main event. When completed everyone meets at a San Francisco restaurant/bar and rides a 60-mile predetermined route to the event. You must make it there under your own power. Awards are given away and the end of the ride is basically one big burnouts and beer kind of party. We have $240 invested thus far, so this looks like a good option.

But, how would we build it? Guys build some of the most extreme import bikes we’ve seen, from cheapo hard tail conversions to over-the-top stretched and lowered contraptions. We would like to make something we can comfortably ride more than just once. Check out a new documentary about the event here.

Built by Anvil, an overseas café builders, our bike will never be as nice, but we like the inspiration.

What about a clean café bike? Tear it down, clean up the frame, remount the battery in a rear fender, replace the seat, and paint it black. Done. Well, it’s not quite that simple, but building a traditional bike would be fun. We can install the duel-disc front end or swap for a late-model rice rocket front forks using All Balls Racing bearing kits.

What if we just got on and ride? Invest in some new handle bars, spend an afternoon rewiring the bike, and grabbing a few spray cans and ride. The traditional café bike would be awesome, but that’s more time and investment.

Yes, yes this is a big bike so maybe the whole dirt-bike, flat-track look wouldn’t work, but it might be fun to try. Take a dirt bike front end and rear swing arm and create a four-cylinder that sits high and handles jumps. Crazy?

What do you think? Comment in the comment section below and tell us what would be a fun, inexpensive project with this Suzuki.