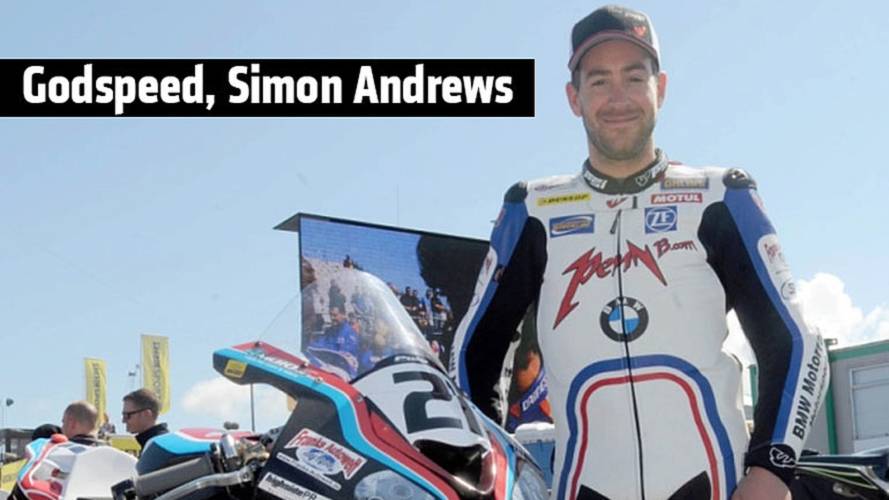 On Monday, the motorcycle racing world lost another of its beloved, when journeyman racer Simon Andrews passed away at Victoria Hospital in Belfast following a crash at the North West 200.

Twenty-nine years old is too young to die. But even a hundred years is too short, if you have not lived.

On Monday, the motorcycle racing world lost another of its beloved, when journeyman racer Simon Andrews passed away at Victoria Hospital in Belfast following a crash at the North West 200. The Englishman was riding the Penz13.com BMW S1000RR at high speed when he lost control at the Metropole corner and struck a curb. He was airlifted to the hospital where he lingered briefly in critical condition before succumbing to his injuries.

Andrews was no stranger to the risks of his occupation. Like most professional riders, he’d had his share of horrific accidents and injuries, but was undeterred. His whole life was racing, and he loved “real roads” circuits the best, as the thrill there was like no other. He’d been riding since age 4, and racing since 16, seeing competition on the national level with the British Superbike series and on the international stage with World Superbike. He was a veteran roads-racer, having competed at the Macau Grand Prix and for the last three years at the famed Isle of Man TT, which is considered by some to be the most dangerous race in the world.

The Western world in the 21st century is a very safe place. The biggest daily threats to our existence are from boredom, or drivers texting on their cell phones, if the current hysteria is any measure. The most common way to die today is from the maladies of old age, and most of us will pass away peaceably in our homes or a hospital bed, surrounded by loved ones, our pains eased by the steady drip of intravenous relief.

But there will always be those among us who eschew comfort and safety in the pursuit of action, adventure, and the superlative experience that can only be gained from risking one’s life. It’s what drove explorers across the uncharted seas and into the expanses of space. It’s why people still climb Everest, and sometimes die trying.

The reaction when such tragedies strike depends entirely on one’s view of acceptable risk, and what constitutes a life truly lived. On the one hand, there will be those who wring their hands and shake their heads, tut-tutting about needless hazards and irresponsibility. They’ll go on about how this sort of primitive thing has no place in this day and age, and why don’t those young men get real jobs, anyway?

But those of us who have tasted the sweet nectar of adrenaline, who have wittingly placed ourselves at the edge of disaster and lived to tell the tale over a celebratory beer, will always dismiss such detractors. We understand that living, truly living, requires action, and action often requires risk. For Simon Andrews, there was no other way to live than racing motorcycles, because to do anything else wouldn’t be living. For that spirit, and for his bravery and skill, he will always be remembered. We should all have lived so much in so short a time.