Ask A Girl: Bravery Is More Than Skin Deep 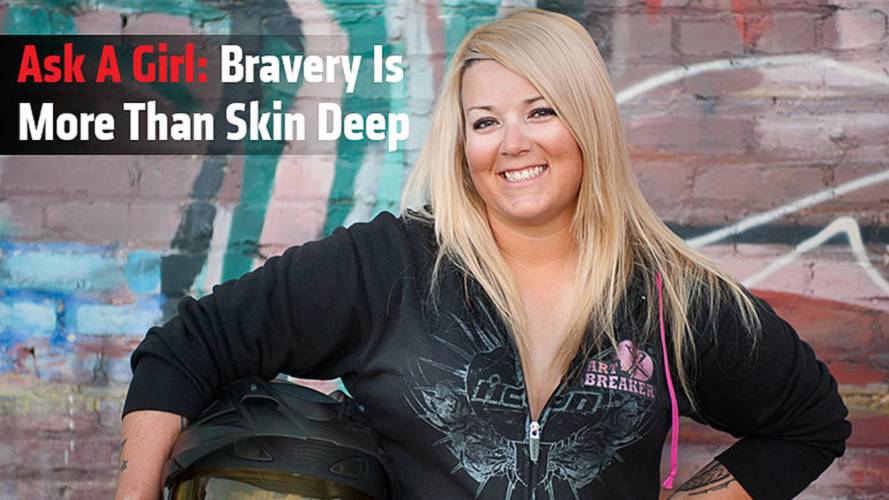 Some lessons are tougher to learn than others.

To some degree, all teenagers are risk-takers. It’s part of the design. It’s how young people learn to recognize and maintain limits, size up a situation, make smart decisions about personal risk, be safe on their own...you know...become adults. Some take bigger risks than others, and some learn tougher lessons because of it. And some, like Brittany Morrow, take a tough lesson learned and make it a purpose. Some, are just incredibly brave.

Brittany is the site manager for motorcycle safety at U.S. Naval Weapons Station Seal Beach in San Diego, California. If you’re a member of the United States armed forces stationed there, you don’t get to ride your motorcycle without her approval. I’m so sure... can you just see the eye-rolling? What could this cheerful, blonde girl on her pink-zebra-sportbike teach you, right, soldier? Plenty.

Brittany Morrow was one of those teenagers. She learned a horrific lesson at the tender age of 19. One that she couldn’t forget if she wanted to. She sees it and feels it every time she gets up in the morning. And she always will.

She has distinct memories of her ride before the crash, as if fate needed to emphasize the contrast of what sun and wind and speed feel like on your skin before it’s shredded along 522 feet of asphalt until it’s just gone. A beautiful sunny day, a good friend, a great bike, and of course, as always, a good helmet. A really good helmet, one that saved her life, but one that was two sizes too big with a visor that wasn’t properly latched. It was the most important piece of safety gear she was wearing. It was the only piece of safety gear she was wearing when, at 120mph, a gust of wind grabbed her visor and ripped her head back, pulling her off the passenger seat, changing her life forever.

“When I hit the ground, it was as if every breath I had ever taken rushed out of me in an instant. I could feel every inch of my body hitting the road; tumbling, sliding and grinding into the unforgiving surface. In my helmet, which seemed so small and yet completely empty, I could hear my whimpers as I fought to breath and my prayer to God as I gave into the asphalt. In a matter of seconds, I had come to the conclusion that I was going to die, and I was ok with it. I knew this was far worse than anything I had ever gone through and I was convinced I would not live to see the next day. My eyes were closed as I finished my 522 foot tumble down highway 550. I never lost consciousness, but I remember wishing that I had.”

She spent months in a hospital burn unit, as doctors and nurses tried to encourage her skin to grow back by teasing it with a daily peel of gauze from her open, sticky flesh; there wasn’t enough skin left to harvest and transplant elsewhere, she’d just have to grow more. She eventually did, but it wasn’t the same. Brittany grew thick-skinned in more ways than one.

Brittany not only got back on her bike, she became a Motorcycle Safety Instructor. She started RockTheGear.org, a website designed to provide information about motorcycle safety gear, and she told her story. With video.

Almost ten years later, Brittany’s motorcycle nightmare has become her dream, while fulfilling her lifelong desire to serve alongside US servicemen and women. More recently, her new position with Icon Motosports gives her the opportunity to interact with riders all over the country, find out what they need, find out what they want, and help the designers back at Icon’s Portland h.q. develop products to protect the largest organ on any rider’s body. With her own painful story, she tells riders why it’s important.

This story was originally published on May 28, 2014. It's been republished to remind you to wear your gear.