Not For America: Bikes We Want Now 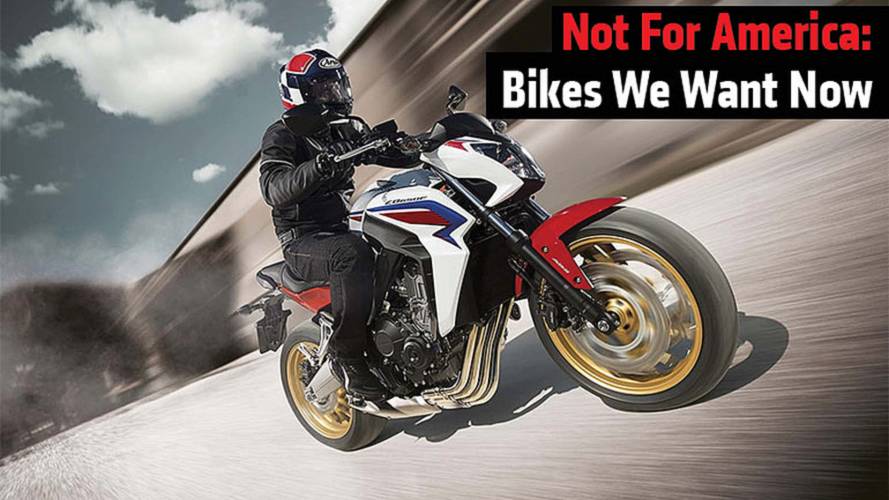 There are hundreds of bikes available in America but there are some that will never see American roads. These are simple bikes made not for America.

We Americans, we think we're so great. But if we are, then how come we don't get the cool stuff from Japan and Europe? Sometimes manufacturers simply deem them "Not For America".

We tend to think that our bikes are too huge, all giant flashy liter-bikes and thrumming 1300cc cruisers, but there are a lot of cool 1000cc+ bikes we don't get here. And many manufacturers—even Harley!—from a few years ago are doing the middleweight bike thing Stateside. Thing is, until we see some of these come here, they'll always do it better over there.

They used to sell big bikes like this once—and it was the mighty Kawasaki "Rex," the ZRX1100 which still pops up on Craigslist from time to time, daring you to hit "contact seller." Do it. Do it, you wimp, and do burnouts on your high school principal's lawn until the security guards throw you out of the gated community. The XJR1300, with its Öhlins shocks supporting three-spoke wheels like the 1990s never ended carries on this same raucous principle, but only on the same European continent which gave us happy slapping and Wildboyz.

One of the most stylish cruisers available. So why isn't it and its 940cc V-twin (transverse, like those weirdo Italians love it) and menacing double-barrel pipes available in cruiser-crazy America? It'd look great next to the California 1400 and both would look great in your remake of CHiPs.

Retro ain't dead, it's just due for a revival. And it's time for Kawasaki to bring back its W-bike to America to the clamors of "hey, isn't that just a Triumph?" No, in fact, it's based on the original Kawasaki W1 of 1965, which definitely was not just a Triumph, either. But the fond riders and custom builders who love the W650 deserve another shot at the rare, wonderful, collectible Kawasaki.

Newly reorganized Bimota, eschewing its Ducati past, is now tweaking the BMW S1000RR. Doesn't 190 horsepower, steel trellis frame, and Öhlins everything sound fun? Alas, Bimota has to walk before it can ride, and the best-performing Bimota ever might not make it to America soon, if ever. Hopefully they'll be able to bring back the front swingarm.

"But," you might shout, "it's way the same as the excellent CB500 range!" Yeah, well, shut up—because it makes the list alone with its awe-inspiring four-into-one exhausts. Just look at it. It's like a bag of wiggling metal snakes. Add the America paint scheme and gold wheels and the 86hp, 11,000RPM CB650F brings an attitude the 500s just don't have. Yet.

A perfect answer to the Honda Grom. Hey, why not fill that goofy monkey-bike niche? The 50cc TZR50 isn't even that small or self-deprecating like the Grom is—which makes it that most rare of bikes: an entry-level runabout that successfully disguises its, uh, entry-levelness.

Oh wait, it's coming here, alright. To the lads at Deus who have singlehandedly dried up the thumper market in Southern California, we say: rejoice.