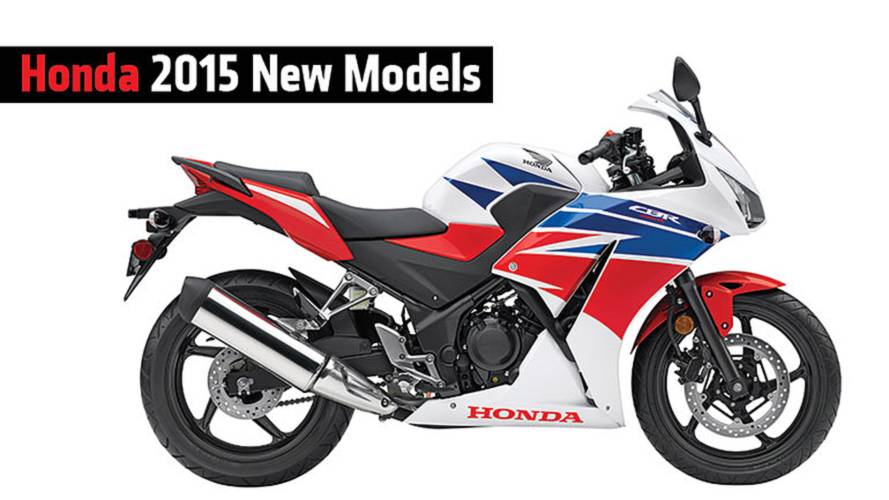 Honda released details on their newest models for 2015. New models like the CRF250R, CRF450R, Rincon and the new CBR300R.

Honda's big bikes have been getting a lot of attention lately, with the introduction of the Gold Wing Valkyrie and CTX1300. Now Big Red turns its gaze upon motocross, ATV and a new CBR entry to further hone the lineup for 2015.

The big news for street riders is the new CBR300R, which will replace the CBR250R in the lineup. The little CBR was feeling the heat from Kawasaki's Ninja 300, which has gained a following among new riders and experienced riders looking for an affordable, fun track day bike. With a 17% power increase over the outgoing 250 model, the new CBR300R should attract a wider range of riders with a starting price of $4,399 ($4,899 with ABS). Available late summer 2014 -- get on a list now.

Motocross enthusiasts get updated CRF450R and CRF250R machine, both incorporating a range of engine changes and race-derived improvements. Pricing has not yet been announced for the CRF450R; the CRF250R will start at $7,599. Both bikes are expected to hit dealerships in the fall of 2014.

Another race-tuned bike returning for 2015 is the CRF150R/CRF150RB-Expert, both of which are designed for "serious amateurs." We're talking tons of travel front and rear, a high-output 149cc liquid-cooled four-stroke engine and a race-proven chassis. For less-serious amateurs looking for some fun, the CRF230F comes with the old electric leg and a great middle range size -- bigger than the 150s, but not as overwhelming as the 450s -- just perfect for fun and adventure. For off-road riders who are still learning the ropes, the CRF150F is a real bike with an easy-to-manage powertrain and moderate weight -- just the ticket for a safe, non-intimidating introduction to the world of motorcycling. And rounding out the motocross portfolio is the CRF125F/CRF125F Big Wheel, both of which are designed to fit a wide range of riders from big to small, experienced to beginner. We'll have to wait to see how much each of these bikes cost, but they should be in dealerships by late summer/early fall 2014.

Capping off the new is the 2015 Honda Rincon, a luxury class ATV with a 675cc engine, automatic transmission and independent suspension on all four wheels. Sophisticated features like electronic fuel injection, a hydraulic torque converter and four-wheel disc brakes make the Rincon into a unique entry in the four-wheel ATV world. Look out for the Rincon in summer 2014. Prices will be announced soon.

Can Honda continue to put out new and revised product at this pace? Let's hope so -- it's been an exhilarating ride so far.