Bike Of The Week: CRC Sportster 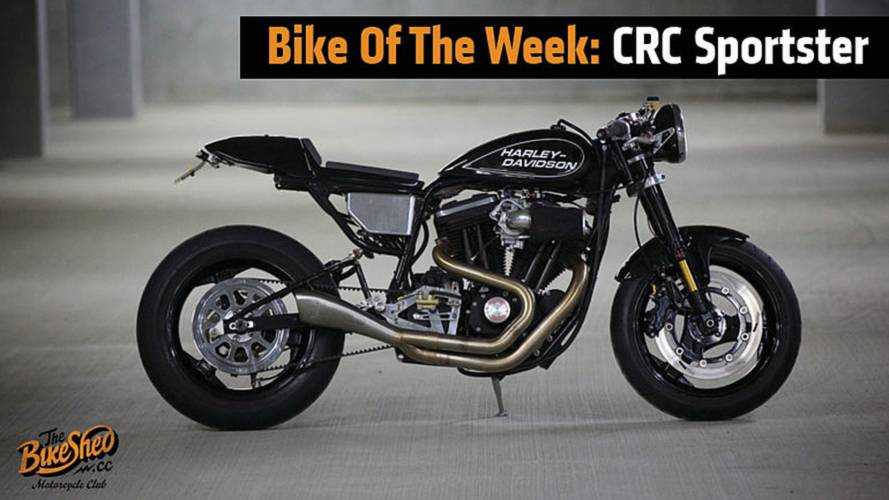 The CRC Sportster is a stunning pieces of flat track machinery with parts to rival the best sportbikes on the market.

Foggy London town doesn't often spring to mind when you think of a Harley-Davidson Café Racer. The chaps over at Café Racer Customs in London decided to set the record straight and prove that a proper Harley motor can evoke some serious street credibility – sans traditional stereotypes.

Ceremoniously unveiled during the BSMC III, which took place last weekend, this remarkably detailed Harley is the brain child (let's not forget soul sacrificed) of Simon and Will of Cafe Racer Customs. Spawned from the days of flat trackers, this former Harley-Davidson Sportster has been under the knife for a serious overhaul.

First is the all new, purpose built,  oil-in frame chassis constructed by C&J here in the USA. A trick feature added to this build is the removable rear swing-arm section for lightning fast belt-changes. The motor is straight out of a Buell S1W1 1203cc twin fueled by a Mikuni HSR 42mm slide carb and a Forcewinder intake. Add some Screaming Eagle cams and carbon pushrods to a set of Vance & Hines headers growling out of a Remus can and the only thing crossing your mind is...WHERE THE HELL IS THE VIDEO?!

Keeping with the racer theme, the tank is all aluminum and rather than fabricate an independent seat pan with "heavy" leather; the strategically placed oil catch can doubles as the seat.

We could pour over the impressive amount of parts (e.g. Brembo brakes, Penseke suspension, Vapor digital gauge, etc.) but you should head over to the Bike Shed Motorcycle Club post to get the full scoop. Not to mention fall in love with nearly every bike they feature.