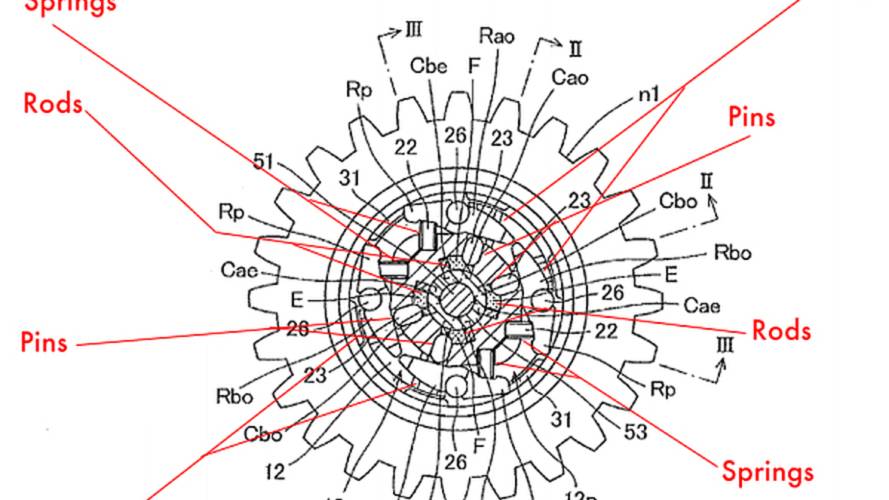 What sorcery is this?

Honda’s early dominance of the 2011 MotoGP season has been partially attributed to a secret new transmission that’s not a DCT but somehow manages to shift as quickly as one. HRC has admitted the existence of the gearbox, but divulged no details. Now, a patent has been filed by Honda for a transmission which allows “continuous operation for a shift at an extremely short time interval.” In all likelihood, this is the secret MotoGP transmission. Let’s take a look at how it works.

The facts behind Honda's secret gearbox

Last month we connected the dots, concluding that Honda must be using a gearbox which could deliver the benefits of DCT using a single clutch. We presented two gearboxes — one made by Zeroshift, the other Xtrac — which claim similar benefits. Both of those work by using a ratchet system between each gear which allows two gears to be selected at the same time, but with only one engaged. When the transmission is shifted, the engagement of the next gear causes the disengagement of the previous one.

Well, it turns out that the mechanism isn’t between the gears, it’s underneath it. The truth about how this system works is even more awesome than I imagined.

The transmission’s 12 gears (it takes 12 to make six speeds) are lined up six per shaft, with nothing in between them. The gears on the main shaft (or input shaft) are fixed and all rotate at the same speed. The gears on the countershaft (or output shaft) freewheel. This is where things get weird. Inside the countershaft is another shaft which takes on the function of the shift forks in a conventional transmission. Operated by the shift drum, it moves 12 rods that have small eccentrics cut into them. In turn, those rods move very small pins which ride in holes drilled into the wall of the countershaft. Those tiny pins operate a set of four spring-loaded rocker arms housed inside each gear. When the pins are forced outward, they move the rocker arms up. The rockers catch the underside of the gear, thus completing a shift.

No clutch trickery is necessary, the engine power just needs to be killed for the time it takes to complete a shift.

It works something like this: From neutral, pull in the clutch and click the lever up to select first (GP shift, remember?). This twists a rod that’s connected to the shift drum. The shift drum pulls small inner shaft into a specific position, which forces the 1st gear set of pins up and pops out the rocker arms. The rocker arms select 1st gear and when you let the clutch out you have drive.

Out of the pit lane and front the front straight you (or a lactose-intolerant Australian, rather) you click down to select 2nd. The small inner shaft and the rest of the assemblies connected to it make a small move. The pins are withdrawn from underneath the first gear rockers and the 2nd gear pins are pushed up into position. The rockers click into place and in something like .008 seconds, you’re in second gear and have full acceleration again.

Notice how I didn’t say anything about the 1st gear rockers combing back down to their resting point? There’s basically no way for them to move until the 230bhp or so holding them in place is withdrawn. This happens when the 2nd gear rockers engage. And so on and so forth.

Other MotoGP teams say they’re already working on similar transmissions. Yamaha claims to be quite far along, identifying the problem with load transfer between shifts as the main obstacle still facing them. Honda appears to have circumvented that problem altogether by equipping each gear with its own robust selectors, meaning that the power transfer during shifts should be incredibly smooth while the shifts themselves can be incredibly fast.

We bet there’s a lot of MotoGP engineers sitting up late tonight, reading this patent and scratching their heads.

via The Rider Files