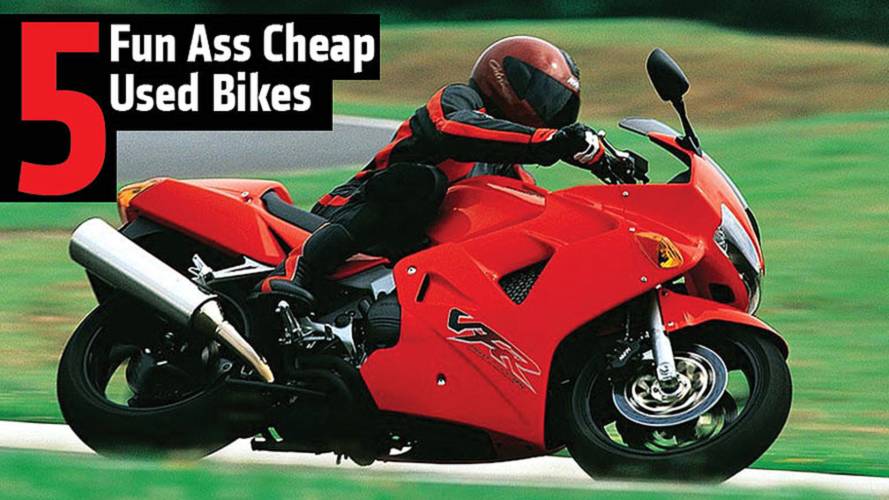 Finding a cheap bike can be overwhelming. So here is a short list of five bikes that won't kill your savings account while providing maximum fun!

A few years ago, Chevrolet caught some flak when it ran an advertisement—for its Cobalt—that depicted a bus with a location marquee reading, "CREEPS AND WEIRDOS." The implication being that if you ride a bus, you'll be surrounded by Gary Busey types. For our intents and purposes, we're going to assume that's true—and in that same vein, here are five bikes that are both cheaper, and less humiliating, than a Chevy Cobalt.

A gently used SV650 will run you about $3,500, which is probably the best bargain in motorcycledom. This is the poor man's Ducati, which seems a bit mean—you could just say that the Ducati is the rich man's SV650, and it would make just as much sense. The ubiquitous SV650 may as well be sold by the ghost of Billy Mays: it does damn near everything pretty well, for just a few payments of $19.95. It trackdays! It canyons! It burnouts! It slices! It dices! It sounds pretty damn cool! And servicing, despite what Ducati reps will talk you into, is still cheap as chips.

It's not a 250. But it's certainly as cheap as one, and nearly ubiquitous And with its reliable power and pseudo-90s styling (walk back far enough, and it vaguely resembles Top Gun's GPZ900R), even the nicest one will net you around $3,500. Pretty sure Tom Cruise spent that much just on his spray tan.

A quick check on that all-knowing enabler of bad ideas, Craigslist, reveals three DRZs in Southern California—all from $3,500 to $5,000. All of them have low miles. Some of them are even clean—no dirt, no tire flecks. Buy one and save the rest of your cash for speeding tickets and Supermoto School.

You meet the most fervent zealots on this Honda, and I'm sure the readers will chime in as well. Is it fast? Check. Will it run forever? Check. Will it take you to South America in comfort? Check. Will it do your taxes? Check. Will it reunite Led Zeppelin? Check. You can snap up its throaty V-twin sound for $2,500 (for the 1998-2001 models) while it figures out how to solve our energy crisis. Check to that, as well.

Grom! Grom Grom Grom! Honda not only poked the part of our cerebellum that adores kittens, Miatas, and the monkey bike, but also gave it a self-deprecatingly silly name to boot: the Grom is Great. It's a new bike for $3,199 and it'll bring smiles and hilarity to those who see you—instead of scooters, which just bring ridicule. (We kid.)

What's your favorite cheap bike? There's a million. There are a million billion trillion fastest, coolest, capable, comfortable bikes you can get for the price of a long-depreciated Kia Rio. You can even go buy one right now, in fact. In fact, we recommend you go do so right now. Do it.