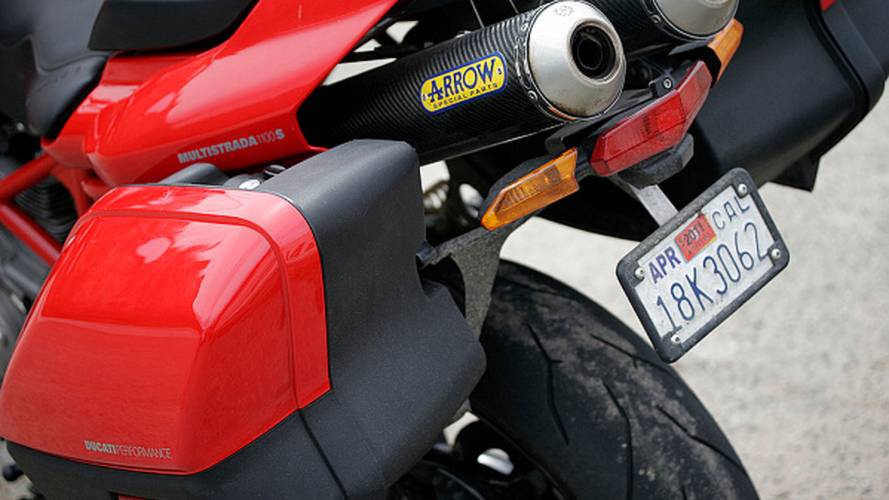 An ode to an Italian.

The Ducati Multistrada 1100S is a special kind of motorcycle. It does everything very well. Even two years after its production has ceased and with the new Multistrada 1200 in dealerships, the old Multi's unique combination of simplicity and ability is still very relevant. For a motorcyclist who chooses to live car-free, a simple yet fun everyday bike like this one is perfect.

I haven't owned a car for three years. Living in Los Angeles, the land of endless urban sprawl. I realize this makes me weird. In that time, I've gotten around on a Ninja 250 and a GSXR 600. All of my commuting, canyon riding, track days, going out with girls, etc has been done on a bike. We usually take my girlfriend’s car to the grocery store, but there have been a few times when it's been out of commission and we've just taken the bike and saddle bags. I use my bike everyday, for almost everything. That said, using a sport-bike as your only mode of transportation is a pain in the ass sometimes. I was introduced to the 2007 Multistrada 1100S by my friend and fellow LA resident David Johnson. He has a business called rentaducati.com and rents four bikes out of San Diego and Santa Barbara.

This can, on occasion, create some strange situations—sometimes you need to take a train from LA to Santa Barbara, ride two bikes from there to San Diego, swap for two different bikes, go home and sleep, and then ride them to Santa Barbara the next day. David told me this at Italian Bike Night last week while explaining the favor he was asking of me. Ride 4 Ducatis in 2 days? Sure. I'd be crazy to say no.

There’s plenty of go when you twist the throttle and it’s plenty fast and fun in the corners.

First and second gear wheelies are absolutely effortless. Roll on in sixth at 90 and there's immediate thrust. Being a rental bike, all sorts of people have had an opportunity to mess up the suspension. I pulled over on highway 150 and with only two tools and a few minutes of fiddling, had the Ohlins suspension dialed in. No need to break out the hammer and punch, or preload wrench, the shock has a remote adjuster. Even the compression and damping adjusters can be adjusted without tools. The front end isn't quite as easy, but it is by no means hard to work with. A wrench and 4mm all are all it takes. If it was my bike, I'd probably put stiffer springs in it at both ends, but with the rear pre-load cranked and the adjusters all set on one click out from full stiff (I wasn't shooting for lap times--I just needed it stiffer), it handled great, even on worn Pirellis.

Yep. I had the hard bags full of street clothes, camera gear, books, tools, water and snacks. I also had my girlfriend, Ashlee, on the back. Even with all the added weight on the back of the bike, I had no problem dragging the pegs and lifting the front wheel leaving corners. Ashlee appreciated the grab rail on the back of the bike and I appreciated being able to brake as hard as I wanted to without the familiar thunk of her helmet smacking into the back of mine.

After being brutally beaten by the wind for hours aboard the Hypermotard, I didn't think twice about picking the Multi over the 848 when we got to San Diego. That the tall seat, low peg, high bar ergonomics were comfortable when what I really wanted was a bed is saying something. On the night trip back to LA, the temperature dropped and though my (now deceased) Apex gloves do a pretty good job keeping my fingers warm, I switched on the grip heaters and had luxurious toasty warmth for the rest of the ride. It's not too bad for a passenger either. Ashlee's sensitive lady butt didn't even start to get sore until we hit the 101 after 130 miles of fast canyon riding. Even then, it wasn't bad, just a little sore.

But it's not perfect.

The windscreen flat out sucks. It’s poorly shaped and much too short. An aftermarket screen is a cheap and easy fix. All around, it’s kinda ugly. The bars are tall and wide. A lot of people like this, but the extra leverage weirds me out and makes the steering feel twitchy. The mirrors work alright if you pull in the clutch, and let the revs fall down to idle. The rest of the time, it’s hard to be sure whether that’s a black and white crown Vic or a red minivan. Wheelies are fun, but they can be a little excessive. The bags are a tad wide. Then again, that’s the price you pay to be able to carry a lot of stuff.

It can carry stuff.

I bought a set of Cortech saddle bags to increase the load capacity of my sportsbike over what I can stuff in a backpack. They get the job done, but they flop around, try to crush my license plate and generally stress me out. Except for getting on and off the bike and aggressively lane-splitting, I all but forgotten that I had hard bags full of stuff. Hard bags solve all the soft bag issues of bouncing around that upsets the suspension, worries about the straps coming undone and limited carrying capacity. With a top case and my backpack, Ashlee and I could easily camp out of this thing for a week. Or buy our groceries for the week.

Maybe not in the same way a 1989 EX500 is, but RentaDucati.com is thinking of selling this pristine low mileage example for around $9,000. The fancy new Multistrada 1200S touring goes for $19,995 before you pay fees and taxes. It’s also a much different bike. The new Multi is a technological tour-de-force. Electronic suspension, riding modes, key-less ignition, a 155bhp liquid cooled superbike motor — it’s got more tech than the space shuttle. The old bike, on the other hand, has a simple air cooled twin and grip heaters. The difference is something like comparing a Sport 1000 to an 1198.

You can live with it.

Even with the minor gripes, I could live with this as my only form of transportation. The air-cooled motors are easy to work on if they ever do need a valve adjustment. That air-cooled twin, exposed frame, and general lack of whiz-bangery makes it seem like more of an honest motorcycle, and less of a sales gimmick too. In a world full of bikes all trying extremely hard to be something specialized and focused, the Multistrada is a simple bike that does everything good enough.