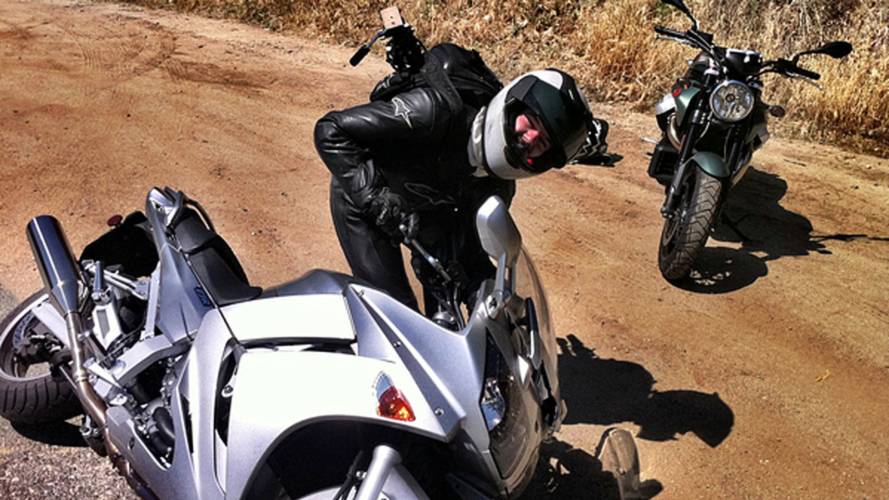 Team Blue opened my eyes to the truth.

Last month when I hopped on my buddy's Ohlins-suspended, Arrow-piped Multistrada 1100S, I actually thought it was a touring rig. Ha. Even with me and the lady parked on top of it, I think it weighed less than the Yamaha FJR with a full tank and empty bags. So what's it like riding a real touring bike for the first time? Well, I still managed to get my knee down.

You don't have to give up going fast.

I like to think of the FJR as the Millennium Falcon of motorcycles. Huge, gray, dated and lacking in the looks department. But, stealthy and brutally fast. Really. A 700 pound bike with saddle bags can be brutally fast. Just ask Adey (on his R1 that would be illegal in most superbike classes) and Wes (on a Moto Guzzi that's way faster than it has any right to be) how hard of a time they had keeping up with me on Highway 39. 142bhp is still 142bhp. The bars and geometry make for a package that steers remarkably quickly, with very little effort and just a hint of understeer. The steering is actually lighter on the FJR than it is on my XR100. It was unnerving at first because I knew that the tires aren't anything special and they're carrying a lot of weight, but once I got used to making small, controlled inputs, I was doing U-turns like a motorcop with ease. Also, I'll never be impressed anymore when I see those guys do that. Turns out it's incredibly easy to make full-lock, full-lean U-turns on a bike that's designed and setup for it. I'm getting sidetracked here. What I was going to tell you about was how easy it was hustle the bike in complete comfort. Hang off with proper GP-racer form and you can drag your knees with the best of em. Or just sit bolt upright and look slow. Your friends can catch up to you at the stop sign.

Touring bikes are big and heavy.

Seems obvious, right? With the quick steering and silent yet brutal acceleration, it's easy to forget that this is a heavy bike. Think of a fat girl in a corset and heels: tiny waist, shapely boobs and butt, hustles on the dance floor. Get her home and naked and you're in for a surprise. Just like I was when I tried to do a little stoppie.

My thinking went something like this: Squeeze the lever progressively harder and the back tire will leave the ground just like it always does. If it doesn't and I run out of traction, the ABS should take care of that and no one will ever know. Well, the ABS kinda worked and I didn't really crash, but I ended up stopped with my feet on the ground and the bike leaned over just a bit. No worries, just yank the bars and straighten things out. This is about the time when the corset comes off and you realize just how much heft you're dealing with. I tried as hard as a could to hold that bike up, but it was no use. The best I could do was assist it in its decent to the ground. Yeah, I was the guy who dropped his touring bike at 0 mph. Luckily, it seems that Yamaha have designed garage-dropability right into the FJR and the only damage was a scratch on the mirror. Cool. Also big and heavy is the 1300cc motor that guzzles fuel like a frat boy doing a keg stand. Ouch.

But that's not really a bad thing. Nobody will try to race you, motorcops smile and wave (this actually happened) and no one really pays any extra attention to you. Not even when you're splitting lanes at a million miles per hour. Old guys walk up to compliment you on your sensible motorcycle. It's comfy enough that the thought of riding 25 miles to home via the freeway, half-awake at 6:00am with my girlfriend on the back isn't that bad. A big screen blocks the cold wind, heated grips keep your hands nice and toasty and the ergos make it so that absolutely zero effort is required from your end.

Cruisers are forever dead to me.

Also worth mentioning is the fact that with the bags off, a touring bike makes the perfect cruiser. Easy to ride in traffic, light handling and with plenty of power, a bike like this is perfect for cruising around town. I don't understand why anyone would buy a slower, less capable, uncomfortable bike that makes a lot of noise and lacks both a fairing and adequate suspension travel.

I've ridden a lot of motorcycles. GSX-Rs, R6s, CBRs, ZX-10Rs, Ducati superbikes, and at least a few fast naked bikes. Despite the diversity, these are all machines designed for speed: they are meant to be as fast as possible while carrying a single rider dressed in a racing suit. A touring bike is designed to comfortably carry a rider, passenger and copious belongings, while still maintaining the go fast. The emphasis is still on performance; the rules have just been changed. Cruising around on the FJR provided creature comforts (I really kind of dig the auto-locking cubby hole) but still let me get my knee down. I'm not going to go out and buy myself a tourer tomorrow, but the idea of a 'busa with hardbags and a tall screen is looking more and more appealing.