How the Moto Guzzi Norge won me over 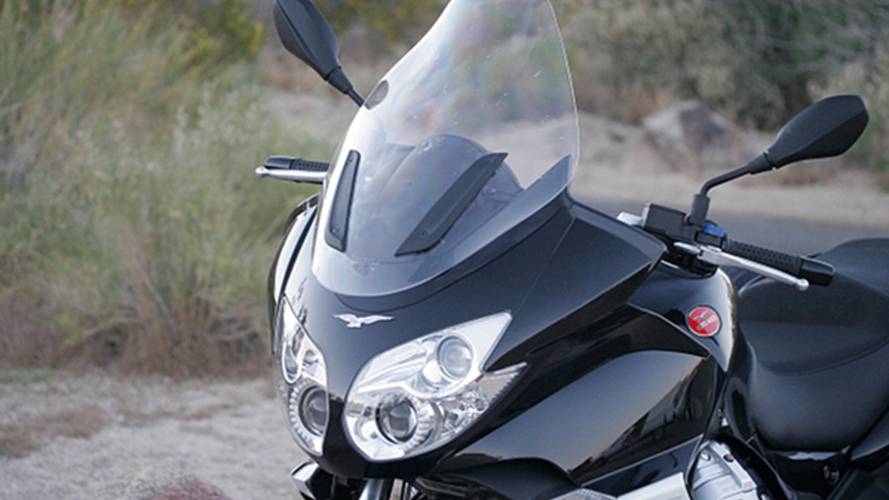 When I picked up the 2011 Moto Guzzi Norge 8V from Piaggio a few weeks ago, I was initially somewhat sad to part with the R1 I had been cruising around on. The R1 felt like it weighed nothing, accelerated the way only a liter-bike does, wheelied on command and had great brakes to boot. The Norge is a touring bike, which basically means it's slower, heavier and a lot more comfortable than most othe...

When I picked up the 2011 Moto Guzzi Norge 8V from Piaggio a few weeks ago, I was initially somewhat sad to part with the R1 I had been cruising around on. The R1 felt like it weighed nothing, accelerated the way only a liter-bike does, wheelied on command and had great brakes to boot. The Norge is a touring bike, which basically means it's slower, heavier and a lot more comfortable than most other bikes. At least, that's what I was expecting. Tipping the scales at 566lbs, it's not bad for a bike with a giant air-cooled twin, shaft drive, four projector beam headlights, hard bags and a fairing that does an amazing job of blocking the wind. It's not slow either. Give it just a hint of clutch and the front wheel jumps skyward. Cool. With the bags off lane splitting through LA traffic, I'm not sure there's any other bike I'd rather be on

This is a fast bike.

Faster than the Black Devil through rush-hour in Moscow and with less than half the attention too. Faster than my GSX-R to downtown and with almost zero stress. Faster than anything else in traffic really and with none of the negative attention a flashy sportsbike draws. It's also comfortable. Comfortable enough that Ashlee and I have ridden it two-up with a full complement of camping gear on two trips in as many weeks. It's also a nice bike. Easily nice enough to justify it's $16k price tag. The paint beats out even the Honda VFR1200, the branding is actually something you'll appreciate. Those tiny red Moto Guzzi ovals on the valve covers could even be considered cute.

Wes fell in love with the Griso, and I have more than just a little crush on this bike. The Norge works so well that you start to wonder why all bikes aren't this good. Rather than polluting the end of a glowing review with a list of gripes and things that didn't particularly suit me, I'm going to list all three of them right here and never mention them again:

1. The center stand drags early and often. If this was my personal bike, I'd have to take it off.

2. There is an extremely limited range of suspension adjustment. It isn't at all bad, but I'd add a stiffer rear spring and full damping adjustment at both ends. (Then I'd probably go to the race track and get laughed at for trying to press a touring rig into service it was never meant for.)

3. Squint and both the R1 and the Norge look like Dame Edna. Its four projectors are extremely powerful but I'd still add an HID system to at least 2 of them.

Can you tell them apart?

So how does it go so fast?

I can't single out any one thing that makes the Norge so easy to ride so fast. When it comes to performance, they got it right across the board.

The motor has a strong, smooth powerband that pulls cleanly from down low all the way to redline. Brembo brakes have amazingly good feel, are easy to modulate and fill you with confidence. Moto Guzzi's strange chassis and motor arrangement work wonders when it comes time to lean the Norge; a slight nudge on the is all it takes to slam it all the way over.

The new 8V motor is amazing. The 1151cc, 4-valve per cylinder, air and oil cooled 90º V-twin pumps out a claimed 102 hp and 77 lb/ft of torque. If you're in the mood for fringed ass-less chaps, you can hold the throttle wide-open, shift super early and keep the motor under 2,000rpm. The windscreen will shake a little as the whole bike vibrates, but you'll still get some acceleration. Get it spinning faster than that and things smooth out considerably.

Leaving stoplights, I slipped the clutch until about 5 grand, shifted just before the 8,000 rev limit in first gear and waited for the blinking red lights to cue my next change. Top speed is an indicated 136 mph. It's limited by gearing, though I doubt it has the power to go much faster than that. At that speed, the bike is perfectly friendly and still willing to change direction, lean all the way over as you wish and even brake extremely hard while leaned all the way over with a passenger on the back. That's an impressive feat for any bike.

When you're riding like an asshole on public roads it's always nice to have the confidence that goes with really nice brakes and a well tuned ABS system. All things considered, this is one of the better factory braking systems out there. The pads have good bite, the lines are stainless and the last-generation Brembo calipers and horizontal master cylinder are just as powerful as they were when superbikes were running them just a few years ago. When the ABS does kick in, it does so in a gentle way that doesn't cycle overly slow or upset the chassis. It's got a gentle touch and once you trigger it a few times, it's easy use to your advantage.

There's nothing wrong with the stock suspension here. The bike turns amazingly fast with almost zero effort from the high, wide bars. Provided the centerstand isn't already on the ground, the bike will tighten its line with only a thought and it will never, ever do anything to scare you or kill your confidence. Case in point: Latigo canyon with bags full of tent, sleeping bags, clothes, food and Ashlee seated behind me wearing a full-on back country pack with the rest of our supplies. This is one of those rare roads that has multiple blind, down-hill, decreasing radius corners, most of them covered in gravel. I flicked it on its side, held the center stand just millimeters from the ground (to avoid being punched in the kidneys) and trail-braked all the way through. If ever there was anything that would make a bike unhappy, it's this kind of maneuver, but the Norge had no problem.

How does a big heavy touring bike end up with effortlessly light steering and amazing feel? Thank the signature Guzzi twin with its crank oriented length-wise in chassis. Rev it at a stoplight and the bike jerks sideways ever so slightly. That's the only time rotational inertia from the crank will have any effect on your riding though. Since it turns a different direction from the wheels, you don't have to overcome all the force when you crank on the bars to put it on it's side. Actually, all Guzzis share this feature. So do BMW's flat twins and Honda's Goldwing.

You won't find anything special here, which is actually a good thing. Standard sized sportsbike rubber fits just fine and the Pirelli Angel ST tires that were fitted to our press bike did nothing but inspire confidence. Funny 16" or 18" wheels and skinny or wide rear tires can severely limit your tire choices and it's nice that Moto Guzzi didn't play the funny tire game here.

It has a sort of fancy ass seat that incorporates magical temperpedic-like memory foam that's incredibly comfortable for both riders. Until now, Ashlee's all-time favorite pillion seat was the thick and flat one on the back of my GSXR. 50º+ lean angles may have contributed to that preference, but even for long, straight and boring rides, she's pretty certain that Suzuki got it right.

"The passenger grab handles are actually effective,” she said of the Norge. “You can lock your elbows with your arms behind you so as to support yourself under acceleration and braking. This is a rarity. Normally, the grab rails are only useful for braking." As far as pillion riders go, she's experienced, having logged over 10,000 miles holding on for dear-life in the last 2 years.

The power adjustable screen does an amazing job of blocking the wind. It distorts your vision slightly, but much less than any other OEM screen I've ever looked through (I'm looking at you Japanese sportsbikes). With the screen up, I was able to ride with my visor open for miles with no wind or anything else in my eyes. I've never been able to get away with that on a bike before and it felt pretty cool. Before the Norge, I never really understood power adjustable screens. I always figured you'd put it in one comfy place and then leave it there for the rest of eternity. Since the screen distorts things just a bit, it's nice to be able raise it on the open freeway and drop it down when it comes time to fight traffic again.

Sure, we we're camping on a motorcycle, but we still had full-length camp pads, comfy sleeping bags, a tent, a whole bunch of fire wood, wine, cheese, gourmet sausages, clothes for off the bike, camera gear and fruit for the next morning. Ashlee had to wear a backpack to carry some of this stuff, but with the optional top-case, everything would fit in the bike just fine. Wes made do on the R1 with a half-length camp pad, minimalist back-packing tent and well, not much else. He found some room for his camp hat, a flannel and a knife, but after that, his Kriega backpack and tail pack were full. The Norge has no problem carrying your stuff.

There aren't a lot of motorcycles I would say that about. When you look at a new bike, you usually imagine what it would be like after you change the pipe, screen, tires, mirrors, hideous graphics and other things the manufacturer obviously got wrong. This ritual is necessary for 99 percent of motorcycles out there. Some people really seem to enjoy taking off parts that the manufacturer designed poorly and then charged them money for. Thousands of dollars are then spent on replacement parts that function properly. It's often called customizing or personalization, but when you put it this way, it's just annoying and expensive. The Moto Guzzi Norge does not need this treatment. Seen from any angle, I can find nothing that really needs to be changed. The pipe looks and sounds great, the screen blocks the wind, grip heaters heat, the seat is comfy, there are no flames, skulls, pin-stripes or tribal graphics to peel off and you can even see out of the stock mirrors.