Harley-Davidson Electric Motorcycle Built By You 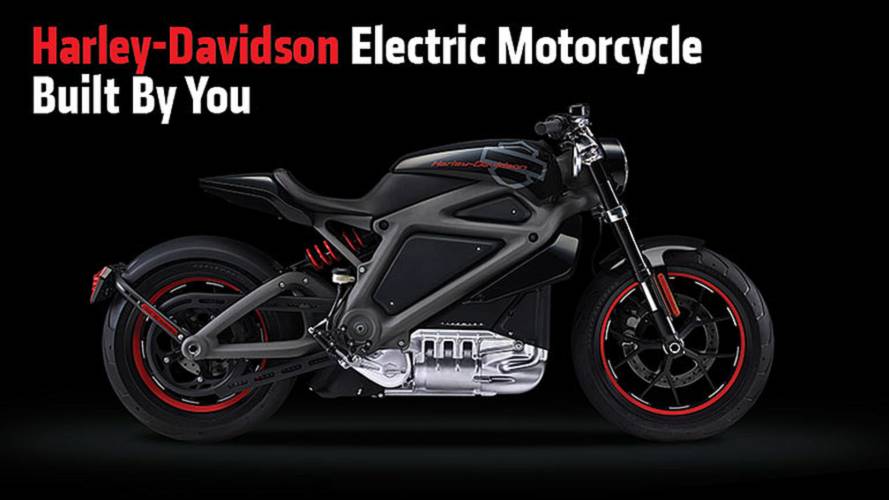 Harley-Davidson announced its first fully electric motorcycle, Project LiveWire. Harley needs your pre-production input and wants you to ride it!

Harley-Davidson announced its plans for its first fully electric motorcycle, Project LiveWire. The official unveiling is June 23, 2014 in New York, but there’s a catch: You can ride the bike, but you can’t buy it just yet, as Harley wants your pre-production input.

The 2001 introduction of the V-Rod was a huge leap for Harley-Davidson, based around the company’s first water-cooled engine, the ’Revolution Engine,’ but still wrapped in a low-seating position, tall handlebars with plenty of rake bike. The Harley-Davidson LiveWire is not just a fully electric engine, but an entirely new motorcycle unlike anything Harley has ever built. Single, center-mounted rear shock, short rake, independent rear fender, and exoskeleton frame, it looks more like a sport bike than a FatBoy. No V-twin, exhaust, transmission, or clutch, the LiveWire is Harley’s first fully electric bike, that isn’t really a bike just yet. Rarely have manufacturers taken the consumer’s opinion in such a massive scale.

If you’ve noticed it’s called Project LiveWire, as it’s not in fact a ready-to-sale bike, but an experiment. A handful of prototype LiveWires are going on simultaneous East and West coast tours starting in New York on June 23rd. The general public will get a 20-minute test ride on the bike and give feedback around the country, which will then alter the final product we will see on dealers’ floors. According to Harley, they don’t have information on price, availability, etc. for the production model as they intend to make changes based around what you say.

Electric engines have instantaneous torque, but top out quickly. The LiveWire is projected to max out at a disappointing 92 mph, but get there quickly with a 0-60 of 4 seconds flat, faster than any Harley on the market. It’ll do that with no emissions or transmission.

Climb on the bike by straddling the electric motor and lithium ion batteries stacked on top. Covered with billet aluminum and a trellis frame, the bike looks nothing like a traditional Harley and doesn’t sound like on either. The push-button ignition switch starts the oil pump that cools the motor as well as a water pump that cools the electronic control unit. Twist the throttle and you’ll hear the whine of the pumps, not a big thumbing V-twin. The sound resembles that of a jet engine, which was intentional according to Harley. “The sound is a distinct part of the thrill,” said Mark-Hans Richer, Senior Vice President and Chief Marketing Officer, Harley-Davidson Motor Company. “Think fighter jet on an aircraft carrier. Project LiveWire’s unique sound was designed to differentiate it from internal combustion and other electric motorcycles on the market.”

When riding, select between “Power,” for a harder accelerating, bar-hopping experience with a 30-mile charge or “Range,” which almost doubles your output to 53 miles, while sacrificing acceleration. The cool thing is, every time you either brake or roll off the throttle, the bike takes that kinetic energy and recharges the batteries. If the battery is completely dead it takes 3.5 hours to recharge from a 220-volt charger.

LiveWire is definitely a lot cooler than a Pruis or Volt, but electric motorcycles that have been on the market since 2008 being produced by niche manufacturers. This is a bold move for Harley as electric street motorcycle sales made up one percent of the market last year. Compare that with Harley’s domination of the entire market with 44 percent of road-motorcycle sales last year, according to the OC Registry.  “Project LiveWire is more like the first electric guitar – not an electric car,” said Mark-Hans Richer, Senior Vice President and Chief Marketing Officer, Harley-Davidson Motor Company. “It’s an expression of individuality and iconic style that just happens to be electric. Project LiveWire is a bold statement for us as a company and a brand.”

Harley expects feedback from 300 riders at each Harley-Davidson dealership stop across the country. Starting in New York, they’ll get to Orange County and LA in late October. Next year, Harley will take the tour through Canada and Europe.

To the author, Harley is trying to gain the attention of the import market and non-bike riders with this project. Non-motorcycle news sources like Road & Track have already reported on it. Harley is trying new things, which branch away from the pushrod, V-twin platform they’ve always had.  You can’t build a bike like this overnight, it took time and major investment and so whether it fails or not I, personally, commend Harley for trying something different.

What do you think? Comment in the comment section below and tell us: Is this just going to be like a lame Pruis? Will you attend a demo ride? Do you like it or hate it?

The Project LiveWire Experience will be officially unveiled in New York, June, 23rd, and then hit the road for the East coast tour. Only the first few dates have been announced, but check ProjectLiveWire.com to see when the bike comes to your town.