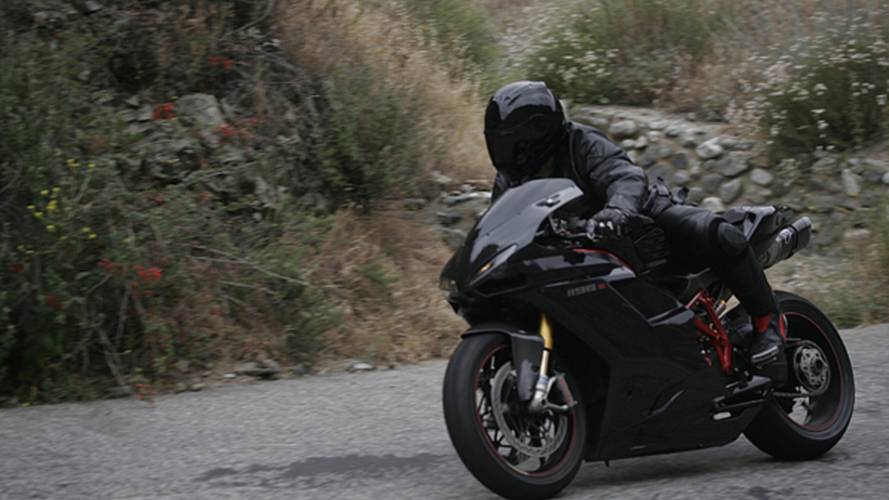 I know Ducati owners have a reputation of being a bunch of rich assholes who ride their over-priced Italian bikes to a coffee shop on Sundays so they can hang out with other Ducati owners who are also wearing Puma track suits and talk about how cool they all are, but let me introduce you to a guy who defies the stereotype. This story is about a motorcyclist with damn good taste who ditched the vin...

I know Ducati owners have a reputation of being a bunch of rich assholes who ride their over-priced Italian bikes to a coffee shop on Sundays so they can hang out with other Ducati owners who are also wearing Puma track suits and talk about how cool they all are, but let me introduce you to a guy who defies the stereotype. This story is about a motorcyclist with damn good taste who ditched the vintage bike trend and started riding fast.

My good friend RR (whose real name I've been asked not to use) might occasionally park his 1198S outside Intelligentsia, but once he finishes his red eye he is off to burn up pucks chasing Adey and I up Angeles Crest. He loves the clean lines of vintage bikes and, in fact, used to cruise around on a real-deal '70s brit bike.

After learning to ride on a buddy's 1990 GSX-R 1100 in 1992 (terrible idea), he didn't ride again until 2007. This is when he bought his first street bike, a 1974 Norton Commando 850. It was, by all accounts, a really cool motorcycle. It made all the right noises, was actually British, looked great parked outside a bar and probably even got him laid once or twice. But it also leaked oil, had Lucas electronics, was painfully slow and had 1974 suspension. In short, like most vintage bikes, it was giant pain in the ass. He sold the Norton to buy a Ducati Sport 1000, and then after catching the go-fast bug from Keith Code's California Suberbike School, he had no choice but to also buy an 1198S to drag his knees on.

RR making a half-hearted attempt to look fast for the camera.

Benefiting from modern suspension, fuel injection, sportsbike tires and convincing vintage Ducati styling, RR's black 2007 Ducati Sport 1000 is also a really cool bike. Sure, it's a Ducati and occasionally requires special attention from Fabrizio to keep its valves in line, but this kind of scheduled maintenance is nothing compared to keeping a vintage Brit bike on constant life support. It's also shockingly fast, comfortable and still makes all the right noises.

In stock form, the Sport 1000 isn't actually this cool. RR has changed out all of the ugly parts and added more upright bars. Rather than buying a new top-clamp or bolting on heli-bars, he ordered some Rizoma bars and mounts, drew up what he wanted and sent his OEM top-clamp off to a machinist to be cut and drilled for the mounts. Yes, machinists still exist and you too can call them up and have things modified or even fabricated from scratch for almost no money. Cool. The new bars don't drastically alter the look of the bike, but do make the riding position much more comfortable for trips to Rosarito or Laguna Seca. Conspicuously absent are large bulbous turn signals, huge taillight, over-sized mirrors and ridiculous plastic tag bracket of the stock bike.

Instead, he's got miniature turn signals, a small tasteful taillight, single CRG 2" mirror and every squid's favorite license plate mod — no license plate. He pays the fix-it tickets as he gets them, usually two per year. Understated black Termignoni cans replace the stock units and may offer a slight power increase. One last notable change on the Sport 1000 are the Bridgestone BT-016 tires. The factory Pirellis that come on the Sport 1000 are more styling exercise than they are tires and decent Bridgestones help him hustle the Sport 1000 faster than most people would think possible.

RR's 1198S is a fire-breathing (literally-I've seen it spit awesome flames) beast of a bike. That there is a 15 year gap between learning to ride on a GSX-R 1100 and buying his first street bike should be all that needs to be said about learning to ride on a serious sportsbike. Even still, the well-tuned 1198 is putting down a lot more power than that first superbike he rode. The admittedly expensive Termignoni full-system, Ducati performance ECU and hi-flow air filter are good for at least 160hp at the back wheel. "But that's ever-so-slightly less than the rest of the liter-bikes!" you might say. Well, you have a point. It's ever so slightly less. When you go to buy a bike specifically to go racing in a superbike class, that might be something you could take into consideration.

Factory Öhlins suspension contributes to the sky-high price of the 1198S and is good enough, aside from setup, for the regular track and canyon days this bike sees. The same can be said for the Brembo Monobloc calipers and radial master cylinder. Spend the big bucks up front and you don't have to buy all the trick stuff later.

Making their second appearance are the Bridgestone BT-016 tires, missing plate and CRG 2" mirror. The 1198 also gets matching black adjustable CRG levers. Yes, those mirrors really do work. The convex glass gives you a crystal-clear of the entire freeway behind you and the entire assembly is maybe 1/10 the size of stock parts. Another simple and functional addition is Stomp Grip on the tank. It blends in nicely and makes it easy to hold on with your knee. In the place of those pit-bull ear-like stock parts are Mad Duc LED signals. They're not the prettiest thing on the bike, but they sure are better than what used to go there. Equal in flash to the gold Öhlins parts are the Speedymoto clutch parts. They don't actually do much, but they sure do look nice. Besides, who wants to be the one 1198 owner without a neat looking clutch?

There's one last trick that's been performed here too. Almost too simple and easy, the ugly stickers have been removed from the frame and gas tank. Believe it or not, you too can do this free trick with nothing more than some Goo-gone or WD-40. It's the difference between an artful composition that you can stand back and appreciate and a just another poorly styled bike with big lame warning stickers.

The small modifications to both of these bikes add up to an admirable achievement of performance and style. If you want a sport bike without the stigma of riding a plastic squid bike consider the 1198 S over its generic competition. And if you want to get there with the cool-factor of a vintage bike, no cafe "racer" can touch the reliability or go-fast of the Sport 1000.