How a dyno measures horsepower 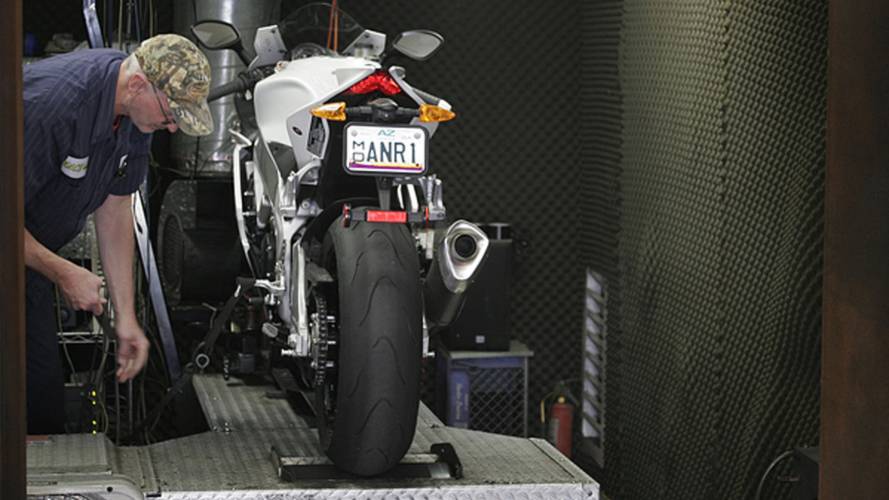 When it comes to superbikes, everyone appears to be very concerned with horsepower. Michael Czysz and Chip Yates go out of their way to make fantastic claims of over 200hp for their motorcycles. BMW claims the S1000RR makes 193 and the ZX10R is supposed to be 197. Even my GSX-R 600 has a claimed 126. But what is horsepower? How do we measure it? And most importantly, why does it matter? What is h...

When it comes to superbikes, everyone appears to be very concerned with horsepower. Michael Czysz and Chip Yates go out of their way to make fantastic claims of over 200hp for their motorcycles. BMW claims the S1000RR makes 193 and the ZX10R is supposed to be 197. Even my GSX-R 600 has a claimed 126. But what is horsepower? How do we measure it? And most importantly, why does it matter?

Back in high school physics, you should have learned that horsepower is work over time. To get technical, horsepower is 33,000 ft·lbf/min (supposedly, the amount of work one actual horse can do in one minute). Back in the day when James Watt was making steam engines, he estimated how much work he believed a horse could do in one minute. He came up with a number slightly over 32,000 and rounded that up to 33,000. From the looks of his math, he also rounded off decimal points, and relied heavily on estimation. Horsepower has always been mostly about marketing, and less about actual work being done. He was a savvy guy. By exaggerating the amount of work a horse can perform (a thing people could understand then), Watt's steam engines all of a sudden became that much more impressive to prospective buyers.

How do we measure it?

These days we measure horsepower with an extremely complex device known as a dynamometer, most commonly known as a dyno. The first step is to strap a bike down to the dyno; in this case we're testing an Aprilia RSV4 on an industry-standard Dynojet dyno.

During the test, the bike stays stationary while the back wheel turns a large roller braked by a computer. The technician hooks up the necessary cables to the bike. These electronic sensors measure variables including ambient air temperature, humidity and oil temperature (if you want to get fancy), while also recording the bike's RPM.

At the start of the test, the bike is warmed up, and then the technician initiates the dyno run. In the case of the Aprilia, he ran the bike at wide open throttle in fourth and fifth gears until it hit redline in each. It's a rather quick process. The force the bike outputs on the roller is torque. To get horsepower, the dyno uses that recorded number, RPM as a measure of time, and a number of other variables in a complex calculation (read: estimation) that spits out the magic horsepower number.

The dyno takes the information it has gathered and uses sophisticated software to print out a report. The y-axis represents horsepower. The two power curves show performance in fourth and fifth gears. We can see that the Aprilia builds horsepower somewhat steadily, has a dip in the mid-range, and builds more horsepower until it hits redline. The best run on the RSV4 showed a horsepower of 163.91 at the rear wheel.

In a perfectly mathematical world horsepower should be calculated as torque multiplied by RPM divided by 5,252 (a constant derived from (33,000 ft·lbf/min)/(2π rad/rev)). This isn't quite the way a dyno works; a Dynojet dynamometer also applies a proprietary correction factor with an explanation that would make your head spin. It's supposed to account for all those above operating variables, like ambient air temperature and humidity. In theory, it helps produce numbers that are repeatable and comparable with reports from other dynos from other parts of the world in different environmental conditions. In reality, there are still a number of dyno manufacturers and variables in play with proprietary "correction factors" and different hardware, so claimed horsepower numbers should usually be taken with a grain of salt. Or several.

Why does it matter?

The need for the correction factor explains EXACTLY why horsepower numbers matter. They allow us to compare engine performance between different bikes.

How did the Aprila RSV4 stack up to manufacturer claims?

Aprilia advertises 180 horsepower at the crank. The crank is the first point where rotational force is created. We historically give value to horsepower numbers measured at the crank because when it comes to cars, that's a measurable number. The transmission sits outside of the engine in an automobile, so the power sent from the engine is coming straight from the crank. However, there's no way to test horsepower output at the crank on a motorcycle.

Horsepower is output through the primary drive to the transmission and finally leaves the engine casings at the countershaft where the sprocket sits. Your first opportunity to measure horsepower of a motorcycle would be at the countershaft, well after the crank. There are dynos that simply read power from that point, instead of sending the power down the chain through the rear sprocket, through the cush drive, and then finally through the wheel and tire.

As the horsepower travels to the point of measurement, a fraction of the power is lost. At the wheel, our dyno test indicated a horsepower of 163.91 for the RSV4. From that number, it's safe to assume that Aprilia's 180 horsepower at the crank claim is on par with the bike's capable performance since measuring at the wheel gives you a smaller number than measuring at the countershaft, and measuring at the countershaft gives you a smaller number than the untestable number we could get from the crank. But the reality is that they have not measured crank horsepower on a production motorcycle engine (pre-unit Triumphs and Harleys excepted, though as far as I know there's nothing there to measure). And neither has any other manufacturer because there is simply no way to do so.

So motorcycle manufacturers are lying?

Where the manufacturers' numbers come from is a mystery to me. They might just take the engineers out to a bar, feed them booze for a few hours and then ask them to estimate (read: fabricate) some numbers. They certainly don't strap the bike to a dyno, do some runs and then print out a number, so I consider the math to be fuzzy and the claims to be estimates. They are estimates that help us compare bikes and really the actual numbers aren't the lie we should be concerned about.

The important lie is one of marketing: More horsepower equals a better bike (car, etc.). The automotive and motorcycle industry has been lying to people and making up ridiculous power numbers since the dawn of the combustion engine, thanks to the savvy Mr. Watt. The actual peak horsepower number itself doesn't really mean much in terms of superior performance. The market demands high ones, but doesn't necessarily understand what they mean. A smooth power curve with lots of power everywhere is much more useful than a very high peak number. If you have a motor that makes 200hp and redlines at 8000 rpm, but only 100 at 7000 rpm and less than 80 anywhere below that, you have a steaming pile of dog shit that's not very useful for accelerating a vehicle. But what if it makes 200hp from 10,000 rpm to it's 19000 rpm redline? That would be quite the trick. A smooth 9000 rpm wide band of power would be very useful indeed. The Aprilia RSV4 demonstrates a similar smooth power curve, and that's why it is an impressive achievement in motorcycle technology. Not because of an arbitrary and unmeasurable number equaling 180.