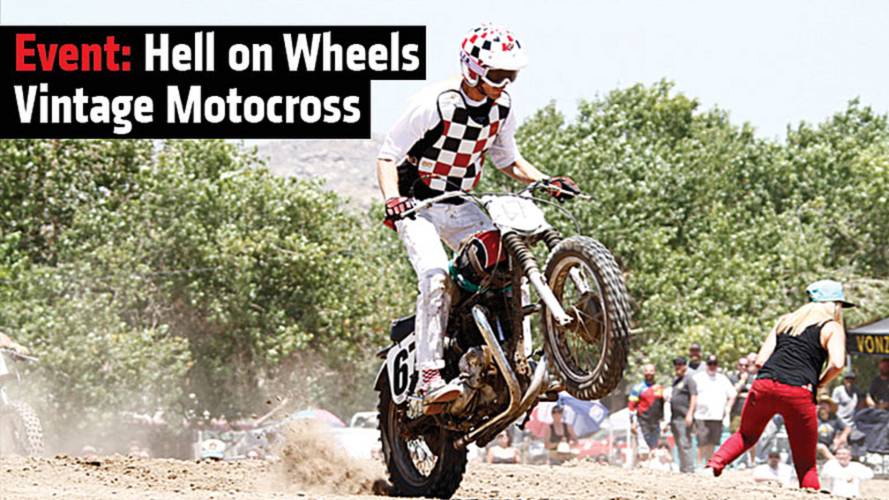 The Hell on Wheels motocross event, it was hot, it was dusty, it was pure heaven in Riverside, California at Milestone Ranch MX Park.

Down in a small valley on the outskirts of Riverside, California is Milestone Ranch MX Park, a desolate dirt-bike track surrounded by, seriously, a dump and a smattering of industrial buildings. We arrived last Saturday, June 21, 2014, for the Hell on Wheels motocross event, it was hot, it was dusty, it was pure heaven.

More like a rally and less like a race, the event was held at the amateur track on the far side of the property. We walked through the tree-covered pit area, passing a vintage Bultaco, some sweet Triumphs, a few Yamahas, and, swell looking and super rare Ossa.

For a moment, we were zapped back to a time when a Triumph with knobby tires and high-standing exhaust was the closest thing to a dirt bike, a time before there was long-travel suspension and inverted forks, this was real dirt riding. Standing there, surrounded by motorcycles made you wish you grew up in the ‘60s and this antique motocross race seemed like a scene ripped from On Any Sunday. Huzzah!

Held on this past Saturday—not on a Sunday—we hung out with the promoters, the Hell on Wheels Motorcycle Club and spent the day watching vintage bikes catching air and slinging dirt. Originally designed for swap-meet-built, budget bikes, it’s been opened up, there’s a class for everyone - from street to vintage to race bikes, there’s are even classes for mini-bikes and scooters. But we found that most of the attendees were vintage riders sporting some seriously awesome vintage Triumphs or BSA – keeping it British. Our favorite was the one dude on a hard-tail bar-hopper wearing a back brace.

The event feels very relaxed as there‘s no serious competition between the racers, nor is it run by any major corporation checking for proper wrist bands and clearance levels. It’s an old-school event, run in old-school fashion. We like.

Loose classes and competition started with heat races followed by a long break and final races in the evening. There aren’t technically any elimination rounds and you’re ranked according to your skill level and class. Trophies are awarded at the end of the day, but most guys and gals seemed worried about having fun and popping wheelies than winning gold.

Racing started at noon with mini-bikes and scooters… yes scooters. If you come to a race just to see crashes than scooters are for you. A short heat race ended with multiple drops and some damaged egos.

One of the coolest features of the Hell on Wheels events is the Women’s Moto Exhibit, a woman-only class filled with a variety of bikes from vintage Yamahas to the new, electric Zero. RideApart contributor Suanna Schick hit the track in her fully electric Zero FX bike. "I love it. I don't have to stop for gas, just go home and fill it up over night," said Susanna about riding the Zero. Read more of her stuff here.

The club making the most noise was vintage British motorcycle group known as BA Moto. A small shop from Long Beach, CA, six of their members were competing including rider Nate Hudson who went out in his first race due to a rubbed taillight wire shorting out. "I had a solid run going," said Nate with shrugged shoulders and a grin. His 1969 Triumph 500 was rolled off of a container ship returning home from Japan Thursday night at midnight. BA Moto club attended the “Hell on Wheels Takes Japan” race and just barley had the bikes ready for this race.

Another BA Moto rider was, Connett Brewer, who, we can’t decide if he had some seriously big balls or a was just a glutton for punishment as he rode the only hard-tail at the event. His 1966 BSA 650 lost its seat on the freeway while being hauled on the back of the truck to the event, so he used leftover military sleeping cloth over with a healthy amount of duct tape. Major props to him.

The bare-metal chopper was an enjoyment to watch as Connett slung it around with the best of them. It wasn't the bike’s first time on the track, as it was run over by a Harley Sportster at the Costa Mesa Speedway in San Clemente, CA a few months ago. Dude didn’t miss a step. According to Connett, the Sportsters started the race too hard and lost control, clipping the BSA and then running over the tank. If you notice, there’s faint tracing of welds where he recently replaced the damage.

Former RideApart contributor and MotoGeo series host, Jamie Robinson was having a ball with a dirt-filled grin and bare chest, and, of course, if you knew Jamie, his charming English accent bellowed over the house PA all day, only stopping when he’d sneak away to ride. Jamie was a blast to watch. After showing up late because his ride fell through, he had to rent a U-Haul truck just to make it there. Jamie was riding an oddball 1979 Yamaha 400 - one of the first mono-shock dirt bikes, where the rear shock travels under the tank and seat, all the way to the neck. He didn’t know where he finished in the end, but did it matter, he had a blast on the track and that’s all that matters.

A Family That Rides Together

Not like a rough and rowdy biker club meeting from back in the day, the Hell on Wheels event seemed like a gathering of families, those related and those not. Wife and Husband duo, Hayden and Dorinda Roberts competed on their two Triumphs. Dorinda was first up in the all women’s’ class sporting a vintage jump suit and Bell Moto 3 helmet on her 1965 650 Triumph, formerly raced by flat tracker, Ben Fekkeldy in the late ‘60s. Dorinda has only been racing the bike since May, she finished fourth in her first event and second in her main.

Their racing relationship showed the variety of the bikes in attendance, Hayden’s custom 1976 Triumph Bonneville 750 (pictured left) caught our eye as soon as we arrived. Like a modern take on a flat tracker, coated in a gloss baby blue and burgundy paint scheme it features an aluminum shock, Mikuni race carb, and race magneto along with BSA MX wheels and a BSA B50 front end. Anything not a necessity was removed including a lot of the wiring,

“Stripped down as you can get one,” said Hayden.

He built the bike to compete in the Baja 1000, along with some of the crew from Deus Ex Machina in Venice Beach, CA. They had planned to pre-run the event this year, but life has gotten in the way and they are setting up for next year. Hayden was knocked out of his main event after his break lever snapped off, locking his rear brake.

Never intimidating, we were surprised as to how welcoming the crowd was, even though most of the riders already knew each other. While there was at least one former factory racers in the crowd, most riders were novices, looking to have fun. Everyone was approachable and friendly as we all shared the common interested in riding vintage bikes. “You'll get ratted on your class and there are trophies and sh**, but I don't care I'm here to have fun,” said Connett.

Next year we will definitely be riding instead of just watching, maybe even going as far as getting some custom vintage RideApart leathers. We’ll have to find or build a bike though, it’ll give us something to dream about though and dreaming about the dirt and racing is a pretty swell way to pass the time.

Want to join us next year? Visit HellOnWheelsMC.com for upcoming dates and see how you can attend. This event costs $10 to enter and only $40 to race. To add to the joy, a lot of attendees also camped in the pit area the night before.

Tell us, have you ever attended a race like this before? If it were in your area would you go? Comment below or shoot us an email at info@rideapart.com