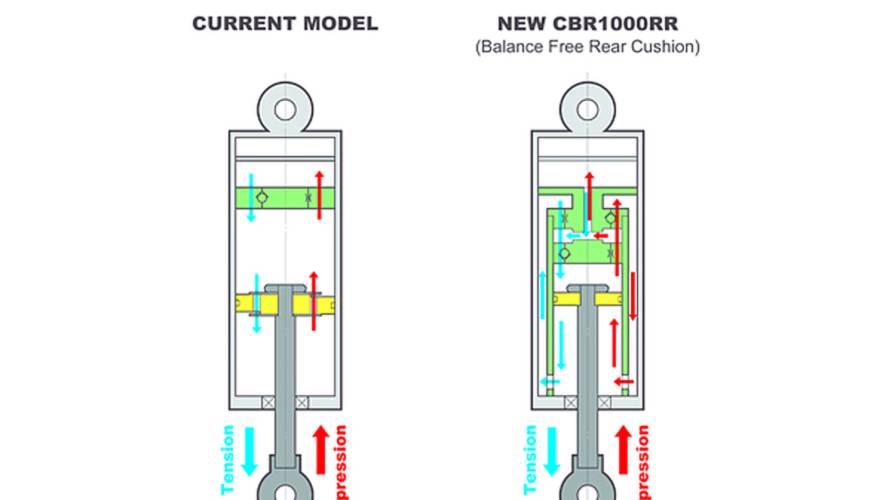 So far as a defining mechanical unique selling points go, "balance free rear cushion" isn't exactly the most evocative description. Not only does it evoke pillows rather than greasy parts, but it just lacks the pizzaz of terms like "EXUP," "Deltabox," and "SRAD." That's too bad, because the 2012 Honda CBR1000RR's neat new trick is actually seriously neat. Here's how it works. First, here's wha...

So far as a defining mechanical unique selling points go, "balance free rear cushion" isn't exactly the most evocative description. Not only does it evoke pillows rather than greasy parts, but it just lacks the pizzaz of terms like "EXUP," "Deltabox," and "SRAD." That's too bad, because the 2012 Honda CBR1000RR's neat new trick is actually seriously neat. Here's how it works.

First, here's what Honda has to say for themselves:

"Developed in conjunction with world-leading suspension specialists Showa, instead of the conventional single-tube layout, the Balance Free Rear Cushion uses a double-tube design: the damper case and an internal cylinder. The damper piston features no valves. Instead the damping force is generated as displaced oil passes through a separate damping component."

"In the conventional structure, the compression-side damping force was generated in two places with the main and sub damping valves, but elimination of the sub valve and concentration in one place allows pressure changes within the cushion to be controlled even more smoothly. And because there is no small amount of oil being used at high pressures, damping force response is improved and damping force can function smoothly during load input. Moreover, damping force can be generated smoothly when switching from tension to compression due to smooth pressure changes."

"The Balance Free Rear Cushion delivers more consistent damping over the duration of a ride, plus improved shock absorption and therefore greater traction since contact is more consistently maintained between the rear tyre and the road or track surface. This technology has been proven in both the prestigious Suzuka 8 Hour race and the MFJ Superbike All Japan Road Race Championship. Indeed a CBR1000RR Fireblade fitted with a Showa Balance Free Rear Cushion won the 2010 Japanese Superbike championship, underlining the advantages of this advanced new suspension solution."

"Easily accessed rear suspension adjusters: The combination of Honda’s Unit Pro-Link rear suspension and the Showa Balance Free Rear Cushion brings more than simply improved rear suspension performance and increased traction. To allow road and track riders to more easily adjust the rear compression and rebound damping performance, the adjusters have been placed prominently on the top of the shock body, offset to the left. As a result the rear suspension can be more quickly adapted to suit different riding conditions and requirements."

If you got bored after the first paragraph, the main points are: It's never been used on a production bike before, it's good for a measurable improvement over the last generation shock and most importantly, it utilizes a twin-tube design with a solid piston. Damping takes place outside the shock body and since the piston is solid, the kind of cavitation that can occur in single tube shocks that have valves in the piston is a non-issue.

If you know anything about Öhlins TTX shocks, it's likely that you would've had a feeling of deja vu reading that press release. Why? Because this shock technology is nearly identical. The only discernible difference is the adjuster style, accessibility and position, with the edge going to this Showa unit.

Single tube shocks consist of an oil filled tube and a piston on a shaft. The piston moves up and down through the oil and has valves built into it to affect damping. This is a very simplified explanation, but it works well enough. A twin tube shock works similarly, but instead of one tube filled with oil, there is a tube within a tube. The piston is solid and sealed to the walls of the inner tube and damping occurs elsewhere. This is good for two reasons: Cavitation, or bubbles that form in the oil as it passes through the piston (and then immediately implode, often causing damage) can be significantly reduced, and with damping external to the shock body, it is possible to completely separate compression and rebound and offer both a wider and finer range of adjustment.

Things become more complicated from here. Imagine you're leaned over on a powerful liter-bike, going through a corner on a track. You're just about at the apex, and you've already started to apply power. Things feel pretty good, you're confident and ready to drive out of the corner, stand the bike up and fly down the straight. As you apply power, the majority of the bike's weight is shifted to the rear wheel and the suspension compresses. Traction from the rear tire is more important than anything else right now and a slide or any change will likely upset the chassis and ruin your drive. At worst, you could experience a sudden and complete loss of traction, go sideways, and high-side. That's certainly not the fastest way around the track.

http://www.youtube.com/watch?v=YLedmQ3LnBsLacking the outright power of liter bike rivals like the new ZX-10R, Honda instead plans to push handling as the new CBR's parlor trick. This shock is going to help that. A lot.

Now imagine your powerful liter-bike is equipped with the factory single tube shock. You've now passed the apex and you've increased the throttle opening to 90%. The front wheel is still in contact with the ground, but just barely. Your rear tire runs over a bump in the track, the shock compresses further and everything is fine. Then, as the bump falls away, the suspension must reverse travel to ensure the tire maintains it's contact with the ground. The spring supplies the force needed to push everything back toward the ground and the shock keeps things under control. Except that in this particular scenario, bubbles (really voids) have formed on the suction side of the piston when the shock is suddenly compressed to deal with the bump. Now that it is reversing travel, the bubbles immediately collapse and the full force of the spring is temporarily allowed to pass through the shock undamped. The tire is overloaded and traction very suddenly goes away. This is exactly what you don't want your shock to do.

Cavitation can be countered with an external reservoir that contains oil, pressurized gas and a piston or bag to keep them separate, but as more pressure is added, 'stiction' can start to become an issue.

The solid piston on a twin-tube shock is much less likely to encounter the problem of cavitation because it's compression and rebound valves are located elsewhere. Oil never has to flow through the piston to the suction side; instead it flows through a valve, the outer tube and then finally, into the inner tube where the piston is. Twin-tube shocks can be run at stiction reducing lower pressures and because of this, they are generally smoother. The separation and remote location of compression and rebound damping also means that they can offer a wider and finer range of adjustment.

What does all this mean? Honda isn't lying, this is the first application of Showa's Balance Free Rear Cushion on a production motorcycle, but OEMs have been offering TTX shocks on production bikes like the Triumph Daytona 675R ($12,699), the Ducati 1098R ($39,995) and 1198SP ($21,995). These bikes use this shock because they're some of the most serious sportsbikes ever built and only the best will do. That TTX is the best. While claims of first and all-new may not be 100 percent true, this is shock definitely a step forward and should help the updated CBR to stay competitive in a market where everyone else makes more power.