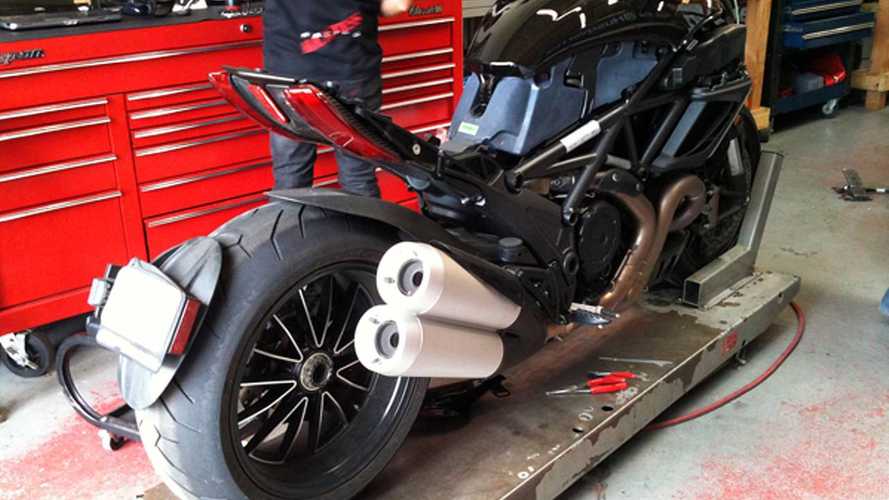 What, exactly, is this weird un-Ducati Ducati?

The Ducati Diavel has been called a lot of things by people looking for a nice pigeon hole. Usually it’s cruiser, naked bike, sport cruiser or muscle bike, but a lot of people have added ugly, dumb and poorly designed to the list. HFL reader and RentaDucati.com owner David Johnson was nice enough to let me take his Diavel out to Palomar Mountain to find out for myself.

The first thing I learned about the Diavel is that it's not a naked bike. We arrived at GP Cycles in San Diego to find the Diavel in quite a few pieces. This thing may very well be part of a massive breach of brand trust and honesty, but what started all that was actually the second generation Monster and its ridiculously complex plastic bodywork.

On old Monsters, you could take the seat off using the key, unlatch the tank and then prop it up for access to the motor. It was a simple, honest motorcycle free of complexity. Just an air-cooled twin with a steel tank, decent suspension and enough power to have some fun. Think of the old Monster vs. new Monster like you would a less extreme new beetle vs. original beetle.

The Diavel continues the theme of fake gas tanks, lots of plastic covers, many different fastener sizes and unnecessary complexity. The new Monster looked similar enough to the outgoing model and performed better, so a lot of people let that one slide. The Diavel is a completely different beast, with no history. I can see why looking at the numbers ($15,000, 240 tire), one would come to the conclusion that this thing is fairly pointless.

The last renter had pretty much trashed this bike. The tank cover had a hole worn in the paint from his belt buckle and that meant half the bike had to come apart to fix it. Looking at all the pieces and their fasteners sent me into terrible flashbacks of the few times I wrenched on side-by-sides and big quads. Anything more than four fasteners to hold a gas tank on is way too many in my book. The Diavel probably has more than 40. Once the tech had the bike back together, we headed off toward Palomar Mountain Road.

The first thing you notice riding the Diavel is the acceleration. It doesn't seem possible that a stock bike, riding on stock tires and a stock wheelbase, should be able to accelerate the way this thing does. If you can get past having your arms pulled from their sockets and decide to hold it wide-open for a while, you'll be rewarded with smooth and easy-to-control power wheelies.

But, if you’ve just watched a tech put together a seemingly endless pile of bits and pieces that make up the “tank” and other bodywork, the second thing you’ll notice is the lack of wind protection afforded by all that bodywork. I understand the appeal of a naked bike, but the Diavel has all the complexity and bodywork of a fully-faired Japanese sportbike with none of the wind protection. It adds an air of fakeness.

Strange rubber curtains bolted to the fork to direct airflow, but no windscreen?

Third is the heat on your right leg from the header. Fourth are the too-low seat and pegs. Fortunately, these are all things that are easily fixed. Ducati will sell you a tall seat and touring screen right out of their accessory catalog and rearsets should be available shortly (Rizoma already makes a set, but they're still low and with non-folding pegs, they look like a recipe for disaster). Alonzo Bodden, who just bought one, tells us the tall seat makes the Diavel much more comfortable and allows you to interact with it like you would a normal motorcycle.

One more decidedly cruiserish detail I noticed were the flexy-flyer rubber-mounted bars. They don't move in a way that affects steering input, but there is more than half an inch of up and down flex.

Up on Palomar, things get interesting fast. Brutal acceleration and ridiculously strong braking combine with poor cornering clearance to create a strange riding experience. Forget all about carrying corner speed. Remember when JT said that the 240 tire would make the bike suck? Well, I’m sad to report it kind of does. You use a ton of lean angle to slowly drag your pegs around corners.

Brake late and be extra sloppy with your downshifts and it feels more like backing in a fast off-road bike on hard-pack than it does a street bike. Mid-corner speed is limited by clearance, but the second you can see your exit, stand it up and whack it wide open. I can't stress this point enough: the acceleration is brutal. I would go so far as to bet that a stock Diavel is faster leaving tight corners than Ducati's own GP12. That’s good, because its mid-corner speed is going to be slower than a Monster 696 (which is what Dave was chasing me on).

Turn-in was faster than you would expect and the low center of gravity and wide bars make mid-corner line changes effortless (so long as you're not already dragging parts). The Diavel I was riding had a tendency to run wide and the front end felt numb, but I'm willing to let that stuff slide. I guessed in the setup and I suspect that fresh tires and a little more time spent twiddling clickers, adjusting preload and possibly even some different spring rates or higher rear ride height would make a pretty huge difference. Still, the stock bike is easy to ride fast and, on a tight road, a good rider on a Diavel should have no problem keeping up with an average rider on a sportsbike. You’ll just have to focus on squaring off corners so you can really whack that throttle open early.

I'm not a huge fan of it's looks or ergos, but the harley riders I met all liked it.

So what is the Diavel? My best guess is that it's what happens when Ducati has a second go at trying to build a cruiser (is everyone else just going to pretend the Indiana never happened?). There's no clear purpose for the bike. It's fast as hell in a straight line and handles well enough, but is crippled by dragging parts. It's supposed to be a comfy bike you can ride all over town, but the seat is too low and the bars have too much flex in the mounts. It's supposed to be a naked bike, but it's got a helluva lot of bodywork with a zillion tiny fasteners to hold it all together and no windscreen. But despite all of these glaring flaws, it's really not a bad motorcycle, just a kind of pointless one.