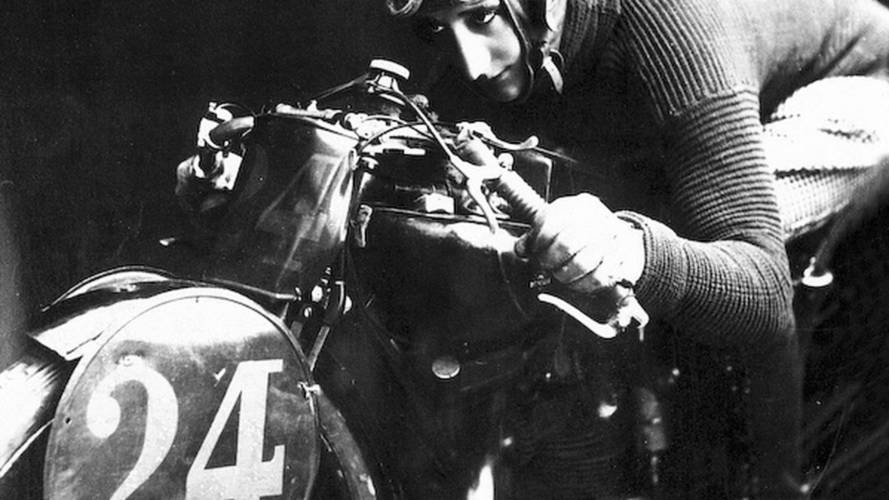 In the spring of 1911, six brothers, acting with the support of their mother, founded a bicycle and motorcycle repair shop called the Benelli Garage. Nine years later, Benelli made its first engine, a 75cc two-stroke that they stuck in a bicycle frame. Just a year after that they made their first motorcycle and a year after that entered the first race. Next year, Benelli will turn 100, here’s a ...

In the spring of 1911, six brothers, acting with the support of their mother, founded a bicycle and motorcycle repair shop called the Benelli Garage. Nine years later, Benelli made its first engine, a 75cc two-stroke that they stuck in a bicycle frame. Just a year after that they made their first motorcycle and a year after that entered the first race. Next year, Benelli will turn 100, here’s a rare look inside its photo archive.

Tonino Benelli, last of the six brothers. Thanks to him, Benelli tasted victory for the first time. Ace of aces of Italian motorcycling.

Here in 1924 with the 147 Sport two-stroke at the starting position at Pesaro’s Foglia racetrack.

The adventure in 1939 at the TT on the Isle of Man concluded with a first place by British rider Ted Mellors on the invincible 250 twin cam.

…..and here the trophy of the Light Weight 250 conquered at TT.

The Argentine Luigi Ciai in action in Rome on the track of the Caracalla Baths. It was the 1950’s and the 250 twin cam continued to lay down the law in the competitions.

Dario Ambrosiani, rider and motorcycle in symbiosis. Italian Champion and World Champion in 1950 with the Benelli 250 twin cam.

The twin cam feted in the factories on via Mameli by the workers and Giovanni Benelli.

1953 was the first year of the Motogiro, the stage race organised by Stadio. Over 200 were off at the starting gun, but to win the race was 289 Leopoldo Tartarici on the Benelli 125 Leoncino, undisputed champion of the race.

Bassotto model of the Leoncino 125 two-stroke: the model designed by the motorcycle maker for the races.

Bolognese rider Ferrari while he literally carves open the waters during the race. He would qualify first in the last race of the Motogiro in the 125cc class of series-derived motorcycles.

A lovely shot of the new 250 four-cylinder at the presentation in 1960.

Silvio Grassetti, rider raised in-house who debuted the Benelli four-cylinder and won on the Cesenatico circuit in 1962.

Grassetti bent over on the “lumacone” 250 on the Turin racetrack. He came  in second behind his teammate, the magnificent Geoff Duke, who won in great style.

Tarquinio Provini in Pesaro from 1964, just enough time to participate in two World Championships and then the calamity at the Tourist Trophy, where his ill-fated fall  forced him to withdraw from racing altogether.

The best loved rider and best remembered by Benelli fans. He was  protagonist along with Giacomo Agostini and his MV Agusta in the “Temporada Romagnola.” Italian Champion in 1968 and 1969 with the 250 and 350cc.

Kel Carruthers: the misfortunes of Renzo Pasolini would be luck of the Australian who claimed the 1969 World Championship with the 250cc, bringing home to Pesaro a second world title.

A rare photograph depicting the legendary Mike Hailwood on the saddle of the Benelli 350 on the Villa Fastiggi circuit at the first “Pesaro Mobili” Grand Prix of  1971. He came in second, engaging in a fabulous duel with the MV of Giacomo Agostini before a crowd of 80,000 enthusiastic spectators.

Jarno Saarinen, even this champion would mount a Benelli, and on a memorable day sped ahead of Agostini to win the 350 and 500cc class with the brand new Benelli models designed Benelli engineer, Prampolini.

Benelli brothers: 1 Tonino: four-time Italian champion in the 175 class. 2 Francesco, third born and sales manager for the company.  3 Giovanni, technical manager and father of the Leoncino 125, model that proclaimed Benelli’s rebirth after World War II. 4 Giuseppe, first born of the illustrious family, a world renowned engineer and motorcycling pioneer, as well as originator of many Benelli products and patents (in 1950, he founded  Motobi). 5 Filippo, the financial wizard of the family, whose input allowed the projects of the six brothers to become a reality. 6 Domenico, known as Mimo, manager of sporting activities and the racing division.

View of the factory from via Mameli n.22.  Historical entrance to the Benelli factory with view of the two lions atop the entry gates. This is why the company used the lions as their symbol. 1960.

1939 shortly before the outbreak of the Second World War, this shot depicts some of the Benelli workforce, which numbered 1,000 odd employees working on three shifts (8/12/24), an enormous number given that Pesaro had only 40,000 inhabitants.

1960 Assembly chain of the four-stroke 175 Sport. The aerial feeder directly cabled to the chassis and paint shops is well in view.

1960 A group of Benelli test riders pose for the photograph.

1931 Party for Benelli employees, one of the many occasions where a convivial, informal atmosphere could be felt. Pictured between employees are the six Benelli brothers and their mother Teresa Boni, all grouped around a model of the 175 Sport.

A moment during the presentation of the Benelli 500 Sport in 1936. Pictured are Giovanni in a smock and Tonino at far left. In a bitter twist of fate, he would meet his death on this very model in 1937 on the roads of Riccione during a test ride.

The 125 lightweight motorcycle released in 1922, the very first model, both safe and easy to handle. The cylinder was machined out of a bar of steel.

147 Normale and Sport of 1925, appealingly designed with the double exhaust and sporty styling. Reliable mechanics and a promise of speed made this the first winning motorcycle in the hands of Tonino Benelli.

175 Gran Sport Monza of 1931, the first sport motorcycle to mount a Benelli four-stroke engine -- a racing bike for all! It won the fourth Italian title.

500 Sport of 1936. Engine introduced in 1933 with the touring model. It was complemented by the sport model, Benelli’s first maxi motorcycle which continued to be produced until the outbreak of the Second World War.

1940 500 VLC, motorcycle designed for the Royal Italian Army but produced in a smaller number for civil use. An authentic road mule.

In 1951, Benelli brought out the model that would be an unqualified sales success for the producer. A model with a long life span, it remained in production until 1962 with 13 models produced and a total 72,000 sold. It was a winner in countless road races.

In 1963, the new Leoncino started a new phase for the 125cc two-stroke model.

250 four-stroke Sport Special with Motobi engine derived from the famous egg-shaped engines that had racked up so many victories for the bike maker founded by Giuseppe Benelli.

Tornado 650 of 1971, the maxi motorcycle and the last model designed under the management of the Benelli brothers. The epic journey of the Benelli family came to a close with this appealing and efficient model.

750 Sei of 1975 was the first six-cylinder in production on the world market. It marked one of the greatest successes of Benelli’s management under De Tomaso.

900 Sei of 1980 was the outgrowth of the mighty six-cylinder designed by Prampolini for De Tomaso.

Tornado Tre 900 of 2000. The rekindling of Benelli’s racing spirit was imbued in the legendary Tornado 650 of the 1970’s. This powerful sport bike was introduced on occasion of the Tourist Trophy of 2000, arousing admiration for its performance and innovative design.

You'll find high-res versions of all these pictures in the gallery below. Images and captions provided by Benelli.