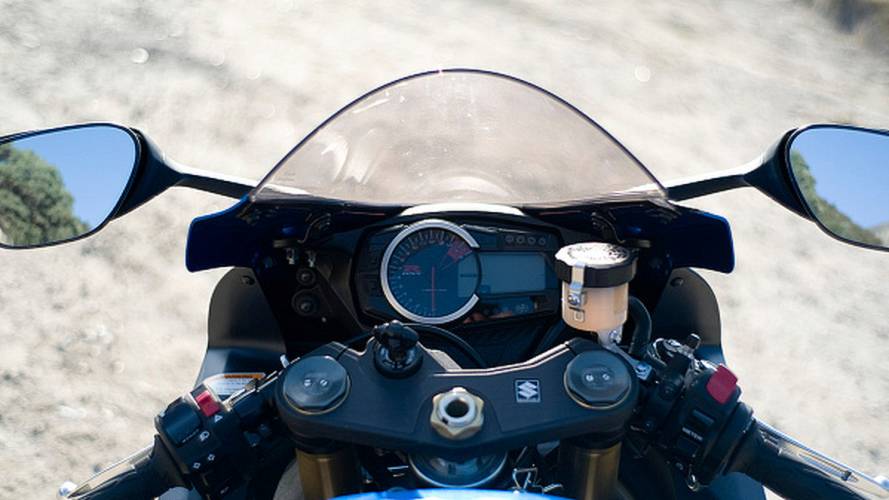 No matter how many vest-wearing squids ride (and crash) GSX-Rs, there will always be something special about them. The GSX-R 750 didn't create the fully-faired sportsbike genre, but in 1985, it was the first one to have all the pieces: fully adjustable forks and shock, aluminum frame, 390lbs and 106hp. Twenty seven years later, the 2011 Suzuki GSX-R 750 is still the fastest sportsbike you can ride...

No matter how many vest-wearing squids ride (and crash) GSX-Rs, there will always be something special about them. The GSX-R 750 didn't create the fully-faired sportsbike genre, but in 1985, it was the first one to have all the pieces: fully adjustable forks and shock, aluminum frame, 390lbs and 106hp. Twenty seven years later, the 2011 Suzuki GSX-R 750 is still the fastest sportsbike you can ride on the street.

Whoa there, you say? What about Öhlins suspended European bikes that haul ass and ooze sex? It's fun riding Daytona 675 Rs and RSV4s, and I can push them pretty hard. But on the street, it's impossible to use more than about 80% of their capability. They work great on bump-free tracks with high-speed corners, but not so well on 30 mph street corners. They're simply too stiff and the ergonomics aren't great for street riding. On a bike like the GSX-R, I can comfortably go 95% as fast as the bike can go, anywhere I'm riding. Is that safe and responsible? That's for you to decide, but the GSX-R is faster on the street.

In 2009 I was in the market for a new supersport. I'd been commuting on a piece of crap Ninja 250 (bent frame and front wheel, no fairing, cracked and rashed tail) and when the motor went, I decided that maybe it was time for a new bike. I read all the reviews, compared specs and looked up who was winning races on what. I wanted the fastest bike for the least amount of money and for that reason, I was dead-set on an R6. Then I spent a few minutes sitting on one at a dealership. Reality set in, and I knew that 500 freeway miles per week on a seat designed for the track would be...unpleasant, to say the least.

The Ducati 848 and Triumph 675 were next on the list. They're faster than the R6, but even less comfortable. The Kawasaki ZX6R and Honda CBR600RR aren't all that bad, but I don't consider them good looking enough to own. That left the GSX-R. And, in 2009, the blue 600 was a good looking bike (and honestly the only visually acceptable configuration). It also had a comfortable seat, short tank, high bars and adjustable rearsets. If you ask most motorcycle journalists, they'll tell you it's comparatively down on power and overweight, but that's only in stock form. I'd rather have a high-quality comfortable motorcycle that makes 2 less hp and weighs 10 pounds more. It's not like it's hard to lose 20 pounds and gain a few hp either. Changing the heavy stock pipe and catalytic converter for a light-weight header and slip-on from an '07 model is actually the only change necessary. I also disabled the SET valve (for a bump in midrange and better throttle response), added a reusable BMC air filter.

The GSX-R 600 and the GSR-X 750 are nearly identical motorbikes. The 750 has different cams, crank, pistons, throttle bodies and engine mapping. It also has different color options. When you're moving, the 750 is faster but not a lot and not in the ways you would expect. The 600 is a high RPM race motor; it doesn't do much under 10,000 RPM, you have to monitor gears closely and there's not a lot of options if you want the 600 to go fast. The 750 is much more relaxed. It wasn't designed for racing so, instead, Suzuki built an engine that works well on the road. There's good power everywhere and there's a very smooth, linear powerband. It has no problem pulling well at 6,000rpm, or if you go full-throttle at 12,000rpm there's still power there too. You can ride it like a 600 or you can run a gear higher and relax a little.

Almost everything that convinced me to buy a 2009 GSX-R is still true of the 2011 GSX-R. The latest version has an even shorter tank, making it more comfortable than ever before. If you're short and trying to decide on a sportsbike, look no further. Ashlee, at 5' 6", can put both feet flat on the ground. What used to be a pretty good chassis with passable suspension is now a really good chassis with amazing forks and brakes. Showa BPF forks deliver amazing front end feel and don't bottom out under braking like the old forks did. They're so much better that they deserve credit for at least part of the improved braking feel. The rest of that credit goes to the Brembo Monobloc calipers. Don't listen to forum trolls saying "Yeah, but they're not the REALLY good Brembos." Even connected to the same Nissin master cylinder by the same mushy rubber lines, the difference is night and day. I'd even say it's better than my '09 with stainless lines and EBC HH sintered pads. So imagine how good this setup would be with the same upgrades.

Suzuki changed more than just the forks and brakes though. The new frame and swingarm save 4.8lbs. The motor gets new cams, pistons and a reshaped crankcase. And the new bodywork and light are good for an 8.7lbs drop in weight. The frame was changed so that the swingarm could be mounted further forward, but it's not a new design, just an update. In moving the motor and swingarm closer to the steering head, 15mm of wheelbase was lost. New wheels look like the old ones, but they're lighter and spin on lighter axles. The old 600 weighed something like 436lbs with a full tank of gas and the new one is 412. The 750 is a pound or two heavier.

There are five things not to like about the 2011 GSX-R 600/750. Unfortunately, the shock and steering damper are the same as they've been since 2006. The shock gets the job done, but it's nothing to write home about. Have it revalved or replace it with an Ohlins TT-X36. The steering damper is terrible. I'm not sure what's inside, but it doesn't feel like valves and oil. Ironically, the new lighter-weight headlight is dimmer. The projector low beam and dual high-beams I love so much on my '09 are vastly superior in every way except for weight.

Last is S-DMS. This is the switch no one will ever use. It used to be on the right bar, above the start button, but it's been moved to the left where the amazingly useful high-beam flash button used to be. When A or Standard mode is selected, it does nothing. When B-mode is selected, it cuts power quite a bit. If you were an inexperienced rider, it might save you from a high-side. But, if you're an inexperienced rider, what are you doing on a GSX-R 750? Are you fucking crazy?! This is a bike for people who have a line item for knee pucks in their monthly budget.

Suzuki listened to customer feedback and did away with C-mode, which cut power so much it was almost funny. Instead of spending more R&D money on a system no one will use that doesn't make the bike faster, they should've gone all the way and removed the system entirely. Or spent that R&D money on traction control, which would make this bike better. Either way, I'm bummed to see the high-beam flash button lose its spot.

We took three bikes to Little Tujunga Canyon road: the CB1000R, Street Triple R and the GSX-R750. I was riding the 750 and I took it easy on the way up to keep Wes and Grant in sight. Once they figured out the road and I got a chance to get out on my own and push, I found out that there are real differences to the 2011 GSX-R. Hard on the brakes, drop three gears, dump the clutch and turn in hard. The rear wheel breaks free and slowly goes sideways. The GSX-R 600/750 has the best slipper clutch ever installed on any bike from the factory and backing it in is effortless. As I increase lean angle and ease off the brakes, the back end comes back. My right puck touches down and 15 feet later, I'm at the apex. Roll the throttle open, get off the bike as far as possible and hold on as the front end gets light. Knowing the limitations of the factory BT-016 tires (they overheat and get greasy), I limited my fun to just a few miles. But what a few miles.

No single element by itself would make this bike fast, but, just like in 1986, it has the entire package: brakes, forks, chassis and a motor that makes a lot of accessible power (in the case of the 750), along with tricks like a perfectly dialed slipper-clutch. Get over the stigma of stuntahs and squids and the fact that most iterations of the GSX-R are a bit ugly and you're left with the most impressively performing bike that's comfortable enough for daily street use.