Is the BRD RedShift SM really faster than an ICE supermoto? 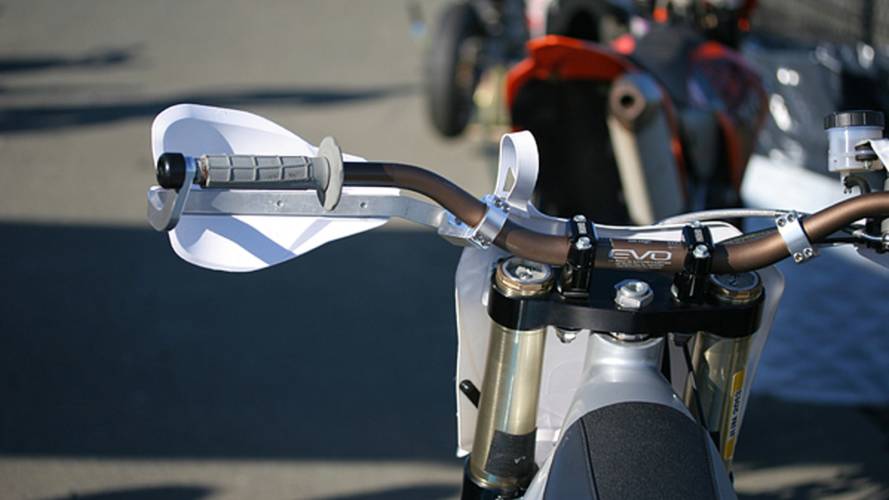 The RedShift is fast, designed to compete directly with existing motocross and supermoto bikes.

The BRD RedShift SM is a 250lbs, 40bhp electric supermoto. Unlike Brammo or Zero electric models, the RedShift is fast, designed to compete directly with existing motocross and supermoto bikes. And unlike other electric racing prototypes, it has been developed from the ground up with consumer production as the end goal. This weekend, BRD handed over keys to the development prototype for the first time. Does it perform as promised? Well almost, until it broke.

BRD is a small Bay Area startup that's doing something different. Instead of designing in the vacuum that seems to contain other electric motorcycle companies, they took a good look at what was possible with the best battery and motor technology and figured out that they could build something close to the current crop of 250cc MX bikes (a KTM 250 XCF-W produces 39bhp and weighs 249lbs with a full tank of gas). Loud motors with no emissions controls keep hardcore MX bikes confined to the track. Zero emissions electric vehicles are perfectly legal for use on the street though, so they bolted on 17-inch wheels and made a supermoto too.

Aside from springs, damping, wheels, front brake and fender, the bikes are identical. The chassis it built in two pieces. One for the steering head, upper battery mount, radiator and computer and another that uses the motor and battery as stressed members while supporting the subframe, upper shock mount and swingarm. The two pieces bolt together near the top of the battery and you might call the design a modular twin-spar/backbone hybrid. BRD hasn't released chassis measurements, but they say the geometry is based on existing MX/SM bikes.

5.2kWh of juice should be good for 50-ish miles of commute-style riding or 2-3 twenty-minute track sessions. The Redshift also has a unique advantage over its gas-powered competitors: 200-hour maintenance intervals are far more attractive than oil every 5 hours, valve adjustments at 20 and a piston every 40.

With a normal bike, you start the motor, pull in the clutch and click into first gear before you can even think about going somewhere. The BRD is more like a loaded gun with a broken safety. Flip the kill switch to on, push the start button, count to five and feed in some throttle. Bam.

Coming off the KTM 250 XC-F supermoto they had at the track for comparison, the BRD feels lighter and smaller even though it is neither. Nice trick.

It doesn't feel much faster, partly due to an artificially lowered redline in its electric motor (from 12,000 to 10,000rpm), and partly because its power is so much smoother. Lap times don't lie though and it really is faster (at least while riding at a conservative anti-crash pace). On my second lap out, I matched my best time of 1:09 around Infineon's kart track on the KTM. From there, I got faster until I decided to try out the rear brake and almost crashed. Whoops. Crashing a priceless prototype would probably (almost certainly) get me black-listed with BRD. Still, I pushed hard until computer troubles forced me to pit early and call it a day.

The thing about prototypes is that they're not finished. The forks, brakes, swingarm and subframe/tail will all go through changes and revisions before being finalized for the production model. The programming will also go through quite a few changes as well. First, to fix obvious issues like the intermittent stutter and surging that forced me to pit and second, to further refine power delivery and throttle response. The neat thing is that it's all controlled by code. Think an auto-tune Power Commander is fun to play with? Imagine how cool it would be to tailor every aspect of a bike's power to suit your riding style and taste.

BRD hopes to deliver the first bikes to customers at the end of 2012. If they're to meet that goal, they'll need to work on their prototype, test a lot more and put the bike into production. The parts that are already done (chassis, motor, battery, design) are very good and its 250lbs, 40bhp specs mean it will definitely be able to keep up. The only question is whether or not they can find enough early adopters that are willing to pay $15,495 for an ultra-low maintenance race or play bike. At roughly double the price of the ICE competition, you have to be a really big believer in BRD's long-term, cost-of-ownership math.