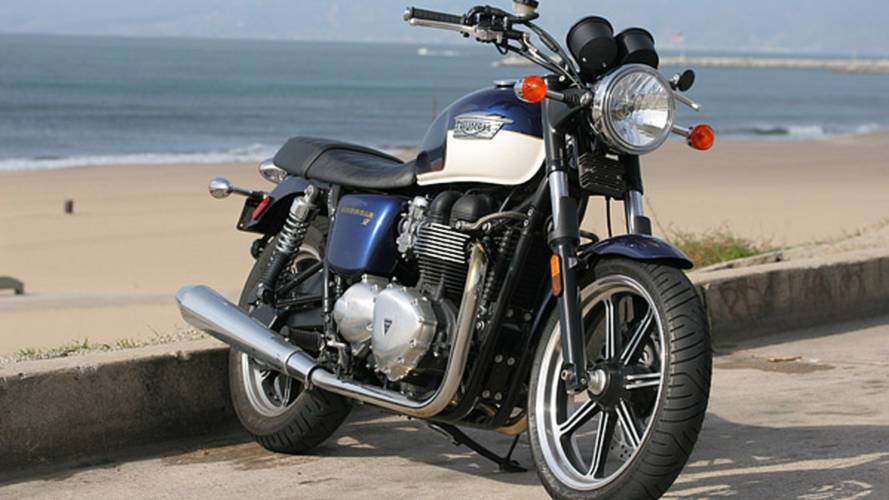 Since 2001, the Triumph Bonneville has always just sort of been there as a good-looking, if unexciting retro bike. Reliable, shiny and affordable, but not the kind of thing you’d lay awake at night dreaming about. For 2010 and 2011, that’s just changed, totally. Triumph won’t tell you that the humble Bonnie is suddenly one of the most most desirable motorcycles on the market. But, don’t wo...

Since 2001, the Triumph Bonneville has always just sort of been there as a good-looking, if unexciting retro bike. Reliable, shiny and affordable, but not the kind of thing you’d lay awake at night dreaming about. For 2010 and 2011, that’s just changed, totally. Triumph won’t tell you that the humble Bonnie is suddenly one of the most most desirable motorcycles on the market. But, don’t worry, we will. This is why you really, really want a 2011 Triumph Bonneville SE. The first thing anyone will notice about the Bonneville is its looks. On the surface, it looks like something from the '60s. Air cooled twin, carburetors, boring old school forks, twin shocks, banana seat. Take a closer look though. Are those really carburetors? What's inside those 41mm forks? Are those 17" wheels? All but the most fanatical motorcycle enthusiasts will never notice these things, but spend a little time on the bike, and you'll eventually reach the conclusion that it's a modern motorcycle wearing a vintage costume taken from grandpa's closet. After being discontinued in 1988, the Bonneville was reintroduced in 2001. Fuel injection came to American models in 2009, and minor changes to mapping and engine internals the next year resulted in a quiet motor that produces exceptionally smooth power and vibrates only enough to let you know it's there. The 2001-present bikes are well loved, as evidenced by the steady $4500-$5500 prices on the used market, but the revised fueling from 2010 on really is a big improvement over carbs. Forks and shocks aren't adjustable for anything but rear preload, but Triumph did their homework and got the spring rates and damping right. The chassis those components are bolted to has a few tricks of its own. Wheelbase is 57.2" and a very low cg make it feel slightly longer than that. Rake and trail are 27º/4.2" don't appear very sporting on paper, but when combined with a 17x3 front wheel and 110 tire, steering effort and feel are sublime. Motorcycle companies don't publish numbers for swingarm length, pivot height and angle or the position of the countershaft sprocket in relation to the swingarm. They should though because those factors determine how a motorcycle will handle under acceleration. Still, you can tell just by looking that Triumph got things right. I'll show you what I mean.

I include the sportster because it's the only direct competitor to the Bonneville. Take note how similar the swingarm angles of the bonneville and the 675R are. That's no accident. Now, look at the Harley. See how its swingarm pivot is lower than the rear axle? When you accelerate on a motorcycle, there are powerful forces at work between the motor and the ground. Power gets to the rear wheel through the drive chain and on its way, it tries to pull the rear wheel into the motor and compress the rear shocks. When the wheel is driven, it pushes on the swingarm and tried to squish everything in front of it. The people who design rear suspension for serious motorcycles take these rather significant forces into account and angle the swingarm so that chain pull helps stiffen (rather than compress) the rear end when under acceleration. They put the swingarm pivot higher than the rear axle for the same reason. Harley Davidson just bolts it all together, calls is "slammed" and hopes no one will notice that the bikes handle poorly and tend to bottom out under acceleration. Claimed wet weight is 495 pounds and it feels about that heavy. The low center of gravity makes it easy to handle though and 67bhp from an air/oil-cooled 865cc parallel twin helps it get up to speed fast. Not sportbike fast, but you'll still leave most sportscars for dead. An Iron 883 weighs 565 pounds and produces a pathetic 49bhp. While the Sportster is the only direct competitor for the Bonneville, the only similarities are the size of their engines (865 to 883), price ($7,699 base, $8,399 SE, $8,699 SE two-tone vs. $7,999 Iron 883) and their vintage styling. In any test of performance, the Bonneville is far superior.

Riding the Bonneville is special. It's impossible not to have some idea of what it will be like based on looks alone, and when you realize how well it performs, you'll be surprised. For example, Wes realized that it wasn't a slow vintage bike after he had to work to keep up with Ashlee and I on the 101 late one night. He was riding a CB1000R. But it also makes a great bike for new riders. Ashlee rode it and after just a few miles she asked me how much and said she was going to buy one. She immediately felt comfortable despite her height (5'6"), admittedly poor balance and lack of riding experience. I hope she buys one so I can ride it too. Sit-up ergonomics could best be described as stately or official. The banana seat makes it feel a little dirt bikey, but only in the best ways. There's room to move around for both rider and passenger. Ride it slow, and it feels confident and planted. Ride it as fast as it will go and not much changes. Even when going from closed to full throttle in first gear with a peg dragging on cracked and broken pavement, a terrible idea, the bike stays composed and it almost feels as if it's dealing with the hard stuff for you. Think APRC. Taking the Bonnie to the store and running errands around LA is awesome. You don't want to be a fast moving, aggressive rider on a loud sportsbike, the bike makes you even more obvious to police. My favorite thing is that it's not a loud sporsbike, but it can get through traffic just as fast as one. I can go as fast as I want to most of the time and the only reaction from innocent bystanders is a friendly wave. Suckers. They think I'm out for a leisurely cruise on my lovingly restored vintage motorcycle. There aren't any real negative things to say about the Bonneville, so consider this nit-picking: -The bars are kind of a funny shape and have about 1" more pull-back than I'd like. -Mirrors don't always stay where you put them. I took them off and used a CRG blind-sight from my bike. -495lbs is a lot lighter than 565, but there's no reason this bike couldn't come in around 400 with some fancier materials and generally dropping some of the unnecessary parts. -17x3 and 17x3.5 wheels are good but 17x3.5 and 17x4.5,5 or 5.5 wheels would allow use of true sportsbike tires (footpegs and boots would wear out faster though, hm...). -SE model is just polished sidecovers, chrome tank badge, nicer gauges, and different paint. Triumph
++