A race bike for the (off) road 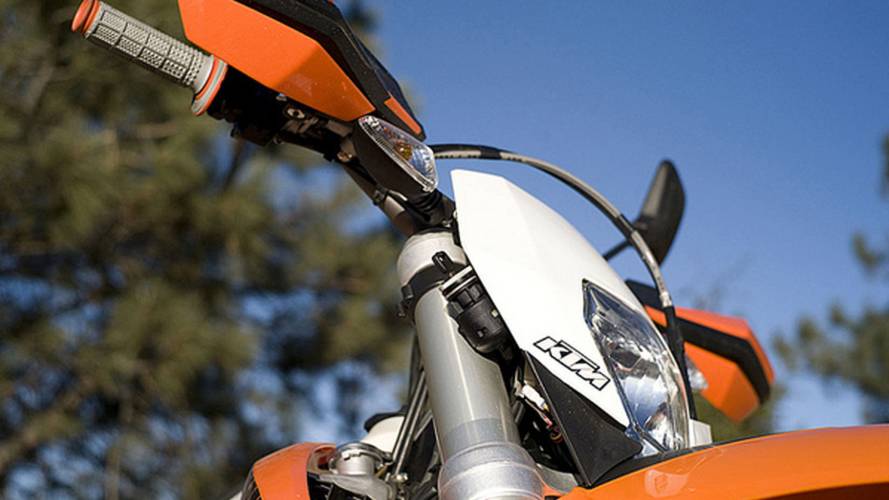 The KTM 350 EXC-F is a bike a lot of people will buy to go racing. It weighs 250 pounds and its fuel-injected, four-stroke 350cc motor produces an honest 45bhp. There is nothing second rate or cheap anywhere on the bike. And, if you can afford a service every 15 hours, it's theoretically possible to to ride this honest-to-god race bike from your home to the trails. Photos: Grant Ray Why a 350?...

The KTM 350 EXC-F is a bike a lot of people will buy to go racing. It weighs 250 pounds and its fuel-injected, four-stroke 350cc motor produces an honest 45bhp. There is nothing second rate or cheap anywhere on the bike. And, if you can afford a service every 15 hours, it's theoretically possible to to ride this honest-to-god race bike from your home to the trails.

As it turns out, bigger isn't always better. Motorcycle technology has advanced to the point that a manufacturer can build a bike that has excessive power. KTM proved this to the world in 2010 when Tony Cairoli won the MX1 world championship against riders on 450s using a 350 SX-F. He won aboard a 350 again in 2011. Think of this 350EXC-F as a street-legal race-replica of that supercross racer and you won't be far off. While the frame and geometry are wholly and necessarily different, the motor only differs from the MX bike in several subtle ways. The 350 EXC-F motor is built with the same cases, cylinder, head and architecture as the other 350s. Where it differs is its six-speed transmission, heavier crankshaft, cams and 12.3:1 piston. All EXC models get an updated PDS rear suspension, longer shock and one-piece cast aluminum swingarm. KTM says its PDS rear suspension is better than a linkage system for off-road riding because it's a simpler design.

My experience on dirt bikes is somewhat limited, but after just a few minutes I felt comfortable enough to enter and finish corners sideways. Backing into corners is accomplished with rear brake, downshifting and careful use of the clutch or a combination of the two. In any case, you're using Brembo's amazingly intuitive controls to accomplish the task. Corner exits are easier. Just dial in throttle until the appropriate amount of wheel-spin is achieved.

It's not all about the mechanicals though. Ergonomics are a large part of any bike's performance and the 350 EXC-F is remarkable here too. A long flat seat covers the top of the bike and makes it easy to move around and the slim-line plastics make the bike feel, uh, slim between your legs. The bike feels neither large or small while you're riding, it just sort of disappears underneath you.

When you inevitably enter an unfamiliar decreasing radius corner too fast, it's no big deal. Just apply some front brake and steer your way out of it. Ditto for when you need to avoid giant forest service trucks or riders of less capable dual-sports. It's shocking how fast you can change your line or stop completely. The chassis absorbs smaller rocks completely, is easy to control over large bumps and retains it's composure even if you're unexpectedly sent airborne.

The motor is even better than the chassis. You'd think dropping 100ccs from the class-defining 450s would equal less outright speed and more gear shifts, but it really doesn't. Thanks to the light weight, the top end rush is still liter-bike fast and it makes enough torque low down that whacking the throttle wide open just off idle in the first three gears will bring the front wheel up. But despite wild performance, it's easy to use too. This is possibly the best execution of fuel-injection we've yet come across, the throttle is linear and intuitive from tiny openings to big handfuls. When it comes to dirt riding, the HFL staff varies wildly in skill level. Grant's pretty fast since he's been off road forever, I'm proving a fast learner, while Crashy McCrasherson still trickles along in 1st and 2nd gears. All of us found the 350 easy to use and more than fast enough. Wes didn't even crap his pants.

The only situation where you'll be unhappy with the 350EXC-F's performance is on pavement. Bikes like the WR-250, XR-650 and DR-Z are called dual-sports for a reason. They actually work well on the road. Tires that limit their performance in the dirt provide real grip on pavement. Laid-back motors that make less power for their size don't need much maintenance. They're all heavier than real dirt bikes; even the WR250R is 50lbs heavier than this KTM..

Ride a 350 EXC-F down the freeway and your ass will go numb after 15 minutes. So will your left hand. Wes swears the flighty front end nearly killed him on the freeway. Try using this bike as a daily rider, and you'll spend a fortune keeping the motor alive while you fear for your life. Tires will round off quickly and deliver terrible grip while they do it. You won't be able to stop very fast and any hard acceleration will result in a wheelie. It's also incredibly loud, possibly more so than the RSV4. Riding this KTM on pavement isn't as sketchy as riding a sportsbike on the dirt, but it comes close.

Singles, weight and why you can't have a 250lbs street bike.

Everyone like to say that the perfect motorcycle would be a super lightweight single-cylinder that produced 50bhp+ and weighed less than 250lbs. But there's a reason that bike doesn't exist. Getting 45bhp out of a 350 requires a state of tune not typically seen this side of MotoGP. Buy one of these EXC-Fs and your engine is getting opened up literally every 15 hours. You'll regularly see things like pistons on your garage invoice. That light weight also comes at high cost. 600 price with half the capacity. Feather light singles have a place, that place isn't commuting to and from work or sitting at wide open throttle for long periods on a race track. That place is off-road. You need to own a pickup if you own one of these.

If it's terrible on the road, what's the point of having a license plate?

At $9499 and with 15 hour service intervals, the 350 EXC-F is far from cheap. Then again, neither are race bikes. But, as an incredibly light, incredibly capable enduro and one fitted with an engine that defies its limited capacity, the KTM doesn't have a hard job justifying its cost, it's simply stunning. That a real race bike is also accessible across all skill levels also makes this a unique motorcycle. Put a n00b on an SBK-spec liter bike and he'll be dead by the time he gets out of the driveway. But, thanks to an exceptionally light weight and intuitive engine control, this race bike with lights would be a good choice for virtually any dirt rider. One dirt bike to rule them all? Pretty much.