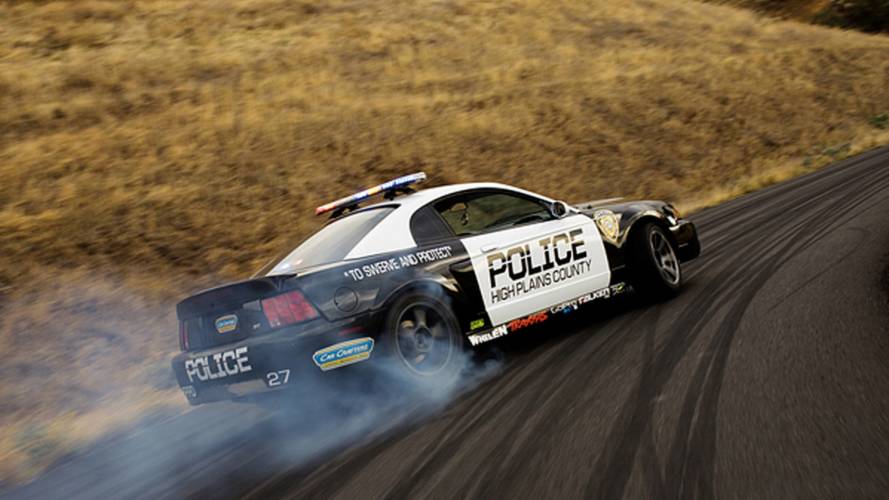 Remember when Nick Apex had a drift-off with a ‘vette-engined RX-7 around a race track? Remember when Icon destroyed a Porsche 928 in the name of douchebag awareness? Well, put the two together, add public roads, a V8 Mustang cop car, Triumph Speed Triples, Ernie Vigil and plenty of tire smoke and you have Icon’s latest video, High Plains Drift 2. You’re exclusively seeing it here on HFL fir...

Remember when Nick Apex had a drift-off with a ‘vette-engined RX-7 around a race track? Remember when Icon destroyed a Porsche 928 in the name of douchebag awareness? Well, put the two together, add public roads, a V8 Mustang cop car, Triumph Speed Triples, Ernie Vigil and plenty of tire smoke and you have Icon’s latest video, High Plains Drift 2. You’re exclusively seeing it here on HFL first.

Last month, I flew up to Portland to watch a rough cut of the video and sat down for an interview with the Icon crew. Here’s an exclusive behind the scenes look at what made all this madness possible.

Justin Knauer: Yeah, Matt Sanders was the director and story creator. Nick and Ernie were the technical bike and riding innovators. I was in charge of the location, gear and equipment. Thad Jackson was there to make sure the still photos were done correctly. Dan Brockett drove the drift car. Mike Levin was helping with the slow motion camera. Eric Hamiester was shooting stills and our buddy Tom Frisch helped film while Matt directed.

We did it the same way we do everything around Icon. When something needs to be accomplished, people step up and get it done. There’s no room on this ship for people that can’t handle multiple duties.

What people don’t really understand, I think, from the outside, is that everything is done from a very rogue, almost juvenile format. We had some this time, but typically there’s not a lot of permits involved. Everything is very last minute. It’s all like, ‘Well, we can’t get a helicopter, so what else can we get?’ ‘We can get this R/C thing...’ It’s not like someone came to us with a giant million dollar check and said, ‘Hey, I want a viral video thing.’ Our budget was like $50k.

Matt Sanders: Everything’s based off our own person fantasies somehow. Like, ‘I’ve always wanted to run over a guy’s car who just cut me off in traffic!’ So we make a video about that.

The entire reason that we started using cars in our videos was because we did a short video — the Shinobi video — that literally took like 15 minutes to shoot, but it blew up because Autoblog, for some reason, picked it up even though there was no car in it. It got in their stream and it was like, ‘Oh shit! Really?’ I never even thought about our stuff getting picked up on the car side of things. But, from there, we decided to try doing a video with a car somehow. And then Nick had the drift bike idea and we just kind of combined the two ideas and that was that.

For this one, we just wanted to go further. At one point, we were talking two cars, but thought that might be hard to shoot. How do you fit two cars and two bikes in one shot? But, two bikes are easier and that’s something we’ve wanted to do anyways. So there’s two bikes.

We were trying to figure out what we do with this car. Is there some kind of story we can build? The police thing just kinda came out. Let’s do a police chase and make it seem like they’re breaking into tracks and they’re hooliganizing everything. And then, also bringing it to the street. Not that we endorse doing that stuff on the street, but this makes it more relatable.

Nick: I have one weakness. I don’t care about girls or other riders. But, if I see a kid, and the kid wants me to wheelie... I can’t ride on the street because of all the children.

Matt: Jim Guthrie, was really good in High Plains Drift, so I asked him if he wanted to be in this film. The plan was to use that same RX-7, just with his new wide-body kit, and paint it up like a police car.

Then, during the last round of Formula D, somebody texted me, ‘Did you hear about Guthrie? He wadded his car!’

Justin: And this was after Matt went through the trouble of getting the real police light bar, the real lights for the front, the car is decal’d, painted, legit.

Matt: Jim smashed it good and broke himself bad too. Fractured a vertebrae and broke his teeth out. He was feeling super bad. But, the cool thing about Jim is he’s got his own body shop. So, he’s on his way to the hospital and he calls up and gets this Mustang into the paint shop and lined up Dan Brockett to drive.

Justin: Then we needed to prep the bikes. Roaring Toys made us one-off swingarms, not something you could typically get. Triumph guys never put extended arms on their bikes; they’re Triumph guys, they’re afraid of that. Nick can fill you in on the trials and tribulations of swingarms.

Nick: The ZX-10 in the last video was really specifically built for drifting. It had a strut so there was no rear suspension travel and the swingarm was massive. I think we were about 10 inches over.

With that long swingarm and the 240 tire, everything works in slow motion. A true drift should basically be on the racing line, just sideways. If you screwed up on the ZX-10, you couldn’t get back on the line, you just went wide. The swingarm made it track in that specific way and it also chattered really bad because there was no suspension travel. It was my first attempt at a what I thought was a good idea ...and it was not a good idea.

What I wanted to do with the Triumphs was go six inches over so it could still be ridden a little aggresively. It turns out that six inches on the Triumph doesn’t feel bad at all. You don’t feel like you’re on a long bike. You can drag knee. You can go nuts.

Thad: When the bikes showed up at Oregon Raceway Park, they wouldn’t run. They were brand new bikes that hadn’t even run yet. So we had to make an emergency stop at Cascade Motoclassics to have their techs unlock the computers.

Nick: So we drove out from Portland with non-running bikes with no swingarms. I had to put a swingarm on in a hotel room. I got like an hour and half of sleep the night before.

It turns out, wheelying a six inch stretched bike down a hill is a bad idea. Once you’ve hit the rev limiter, it’s just kind of BAM. So I blew the fork seal and then, on day four or five or whatever, it finally let loose and I literally shot off the road.

Justin: At the only place you could shoot off that road and not either put yourself into a rock wall or launch down a 300 foot cliff.

Nick: I flew six feet down.

Justin: He picked the softest, cushiest spot to land in Washington.

So, the other thing that happened that’s not in the video, but was definitely the highlight/lowlight of the whole thing was, Dan took Ernie out up Marryhill Road in his full-on RB26 powered 240SX drift car. I don’t know if you’ve ever been in a drift car before, but it’s amazing. Obviously Dan is stoked because people want rides and he has a private road.

So after 20 minutes or so, we haven’t heard anything from them. Nick takes off up the road on a scooter and about 10 minutes later comes back down the road with Dan and Ernie on it. And Dan says, ‘Yeah, I just rolled the car off the side of the road.’

Nick: Right where I went off!’

Thad: Literally, he drove the Mustang, sideways, up that road maybe 100 or 150 times.

Justin: Countless times. I didn’t really know what to expect, but when we got up to the car, it was completely mangled. Like all four wheels pointing in different directions, it’s off the road, the top is shaped like a teepee. It’s totaled.

I honestly believe that if they went off anywhere else we wouldn’t have found them unless there’d been smoke or a fire or until we’d walked the entire road. Somebody would have been, if not severely hurt, they would have been dead.

Thad: The next morning, we could have looked where all the crows were going.

Justin: I mean, you saw the footage. There’s places out here where you do not want to crash. The cool thing is that Matt had GoPros on everything and caught the whole event. It’s...spectacular, to say the least.

Matt: I’m just glad it worked out ok. Because, if it didn’t, we would definitely not be talking right now.