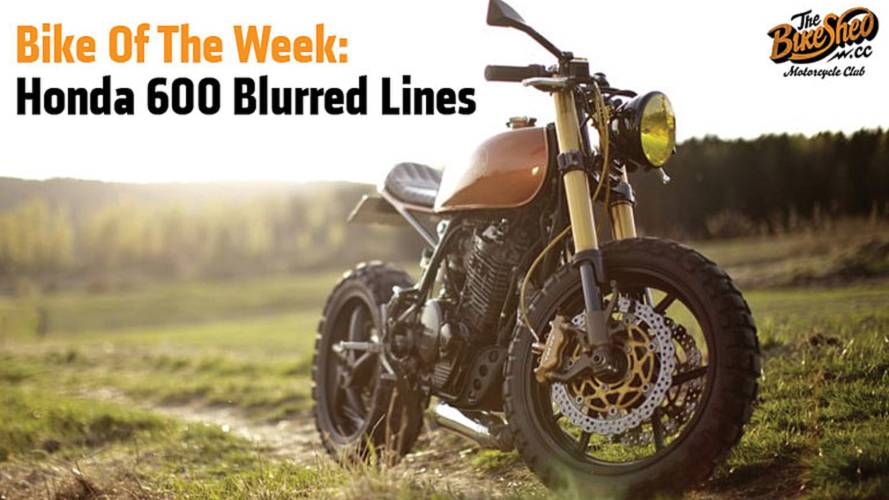 This custom Norwegian Honda 600 is anything but a typical cafe racer. It falls somewhere between off-road and street arena racing and we love it!

I’m not really sure why, but I dig this bike, because it doesn’t know what it wants to be. When building a motorcycle you should have a straight path in your design and, really and truly, stick with it. Without that, your design can look disjointed and unfocused. If you veer too far afield from your design, it shows. In this case, the blurred lines of this 1987 Honda cherry-picks elements of street bikes, vintages and dual-purposes and pulls off a new look, the Café Cross.

"I don’t call it a Café Racer, but a Café Cross," says Norway-based builder known as Casper, because it's easier to pronounce than Øyvind Caspersen.

As a kid, Casper worked in the garage with his dad and never formally trained as a mechanic. He had custom cars, but once he was issued a boring company car from work he started craving a motorcycle. With no money to rent a shop, he had just enough room to build the bike in his garage. His first bike was a traditional cafe racer, which he immediately sold upon completion in order to fund the new build.

At the start of this project, a few of Casper’s friends decided they wanted in on the custom action, so they teamed up, pooled their funds and rented a shop.

“We figured we should have some kind of name, and somehow we ended up calling it Tux Customs, just for fun. We made a logo and now we have stickers and clothes even,” said Caspersen.

He first came up with this design after seeing the Classified Motos KT 600 and, after picking up a 1987 Honda XL 600R on the cheap, he ventured online picking up most all of his parts from eBay, minus the front forks.  Casper, an old school stickler, worked on every piece on the bike himself, including sewing the seat with a funky old manual machine.

The Café Cross' drastic stance comes from a 2005 Kawasaki ZX 10R front end and a single-sided swing arm from a 1987 Honda VFR 400. Using his shop lathe, he machined a bushing which allowed him to use the original steering bearing from the Kawasaki's front end. Out back, well, that was a different story, as the Honda swing arm was too wide for the original frame, Casper built a jig and installed new mounts for the frame from 8mm steel.

In order to make the VFR 750's rear wheel fit, Casper taught himself how to weld aluminum and cut into the rear swing arm.  A process of mixing and matching was needed to get the swing arm to sit at the correct ride height and Casper was able to work out a fix using a damper from a KTM supermotard WP and triangle on the VFR 400 swing arm.

The tank and top of the frame are sprayed a Samoa Orange which is a traditional Audi color. We haven't heard the bike yet, but from the looks of it, that Supertrapp exhaust will make the Café Cross sound killer. LED taillight and 7-inch headlight with yellow tint that matches the gold of the inverted ZX 10R front forks and Casper used Biltwell Kung Fu grips and black/gold 2001 Yamaha R1 rear sets.  Casper said piecing the bike together was a cinch but the routing and hiding the wiring took an amazingly long amount of time.

Casper's only put about 200 miles on the bike since he completed it, yet, he's already contemplating selling the bike old to fund his next project ,which Casper says will feature some pretty heavy "Made in the USA" influences. " often takes some years to appear here in little Norway," said Casper who hints that the next bike will be a modern Boardtracker with a small single or two-cylinder drivetrain.  We can't wait to see what comes next from his tiny Tux Customs shop.

View more photos and read from Casper himself.