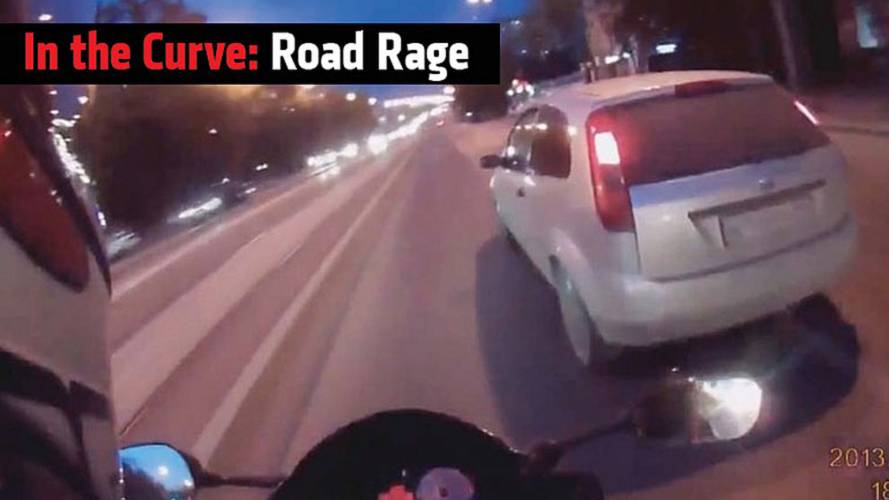 Road rage is nothing to joke about. Especially today when anybody could be packing heat but is it always necessary and what should you do when you rage?

It’s extremely childish to believe that you need to teach someone a lesson. That it’s your responsibility to do a seemingly good thing by punishing someone for a wrong action. That’s the thought process of an insane person. But for some reason being trapped in a sea of square boxes and hot pavement we temporarily act insane. Road Rage.

A car is a moving box, where drivers feel protected while traveling 70 miles per hour down the road. A motorcycle on the other hand, you feel the sweat from a/c condensers dripping from the cars in front of you. You feel the wind, the heat from the road and the feeling of speed. Nothing but empty space separates you from the fender or bumper of a 3,000-pound-plus moving object. A tiny swerve or mistaken lane change can kill you. There are more road-rage triggers for bikers than cars. Non-motorcycle riders don’t understand the risk they put us in.

According to legal statistics the following cities have the most aggressive drivers:

It was a term created by the news in the early ‘90s, coined because of the high-rate of road-rage related accidents. This week’s popular road-rage videos reminded me of how stupid it really is and yes, I am the worst when it comes to road rage. Statistically speaking young males are the most aggressive on the road.

My friend Greg rides a Triumph Speed Triple and on his last visit to Los Angeles, we went riding. While heading to my girlfriend’s adult-league softball game we jumped on the 405 South during rush hour. We started to split lanes on the double yellow that divided the carpool lane from the rest of the highway. For those of you outside of California, you’re not allowed to break that line and only enter/exit the carpool lane in designated areas with dotted lines.

We are clicking along roughly 10 mph faster than the slow moving traffic. The fast lane opens up and we speed up. Riding on the left side of the fast lane, lane #1 as it’s known in the riding handbooks, I’m doing about 50mph with Greg right behind me. I see a large F-150 in the carpool lane when the passenger’s hand points at the road sign for the next exit. I process what they’re about to do as soon as my front wheel comes along side the rear wheel of his truck. I serve as he breaks the double yellow. I clutch it and rev, as my engine is louder than my horn, and narrowly miss the truck. He turns back into the carpool lane as I extend my finger in disapproval.

I continued to coast on as I took a moment to catch my breath in between obscenities. He waits until my friend passes then breaks the double yellow again, because he really didn’t want to miss that exit. Greg was smart, because as I coasted the truck sped up as to intimidate me. Greg kept going and waved to me to come on and ignore it. Greg kept me from doing anything more stupid than I had already done.

Despite the fact that by saying this, it will greatly inflate his ego, this wasn’t the first time Greg had made the right call. As traveling up Hwy 1 a few hours south of San Francisco we encountered a Harley rider. Novelty helmet, go-tee and sleeveless shirt, he seemed like a nice enough guy. He passed us and got into an altercation with a young guy in a pickup truck, giving him the finger. Greg and I continued on and passed a few cars when we heard tires locking up at 80mph beside us. It was the truck set on vengeance. He began swerving dangerously close to us trying to get to the other guy who had gone on ahead, leaving us to clean up his mess.

We ducked behind him and slowed down until he pulled beside us, yelling obscenities about how the other rider needed to learn. Greg merely shouted back, “calm down, this isn’t worth anyone’s life. Let it go.” Not sure if it was his words or the fact that the kid was about to miss his exit, but he ventured off the highway and we never saw him again.

That’s basically it: It’s not worth it. No bruised ego and scratched fender is worth risking your life or teaching someone a lesson. Not to get all preachy, but think twice next time you’re out riding.

My father grew up in a time when he said people would cut you off just because you were on your motorcycle. He said one day people will start hating bikers again. If that’s true, let’s be the bigger people and postpone that from happening as long as possible.