A Few Minutes With: Guy Martin 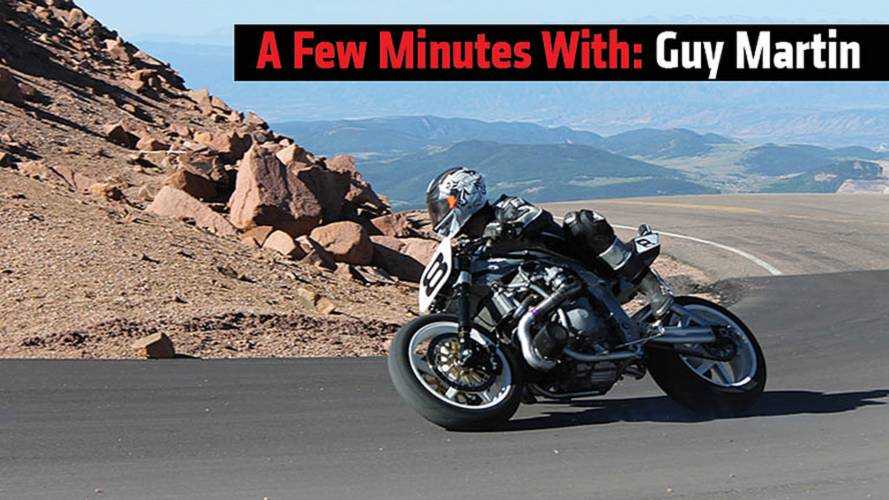 A Few Minutes With: Guy MartinIf you’ve ever watched the Isle of Man TT than you’ve probably heard of Guy Martin. Guy is one of the fastest men in...

If you’ve ever watched the Isle of Man TT than you’ve probably heard of Guy Martin. Guy is one of the fastest men in the world, but you might not know it when talking to him off the bike. He spends his work week as a truck mechanic. But this average bloke / truck mechanic has earned the nickname, “Fastest Man to Never Win The TT.”

Guy is arguably the most famous of TT riders, joining the ranks along side Joey Dunlop. His charming British looks have appeared in more venues than just the racetrack. He recently started a BBC TV series The Boat that Guy Built, has starred in Channel 4's How Britain Worked, and a little film called Closer to the Edge.

As if that weren't enough he got the bright idea to shatter the British absolute cycle speed record at 112 mph. Yes, you read correctly, he rode a bicycle at 112 mph.

Guy recently participated in the 92nd running of Pikes Peak, competing on a hand-build Martek (rumored to be capable of 500hp). Fans came from all over the globe to witness their hero attempt a record at this iconic race. We caught up with him and his team to squeeze a few questions in on a practice day before race weekend.

Well there is nothing else really like it, is there?  It's just fantastic! I mean, we've done most everything on our side (Europe) and so it's just more of the same there. Coming here is something new to us.

Why a prototype Martek here? Why not ride a proven winning bike - a Ducati Multistrada, etc?

There's no real challenge in that. That's not who we are.

To quote Guy’s early comments on the Martek from guymartinracing.co.uk:

"What do you reckon to this Martek turbo I got hold of the other week? If you want scaring this is the tool. It’s based on a 91 GSX-R1100, fitted with fuel injection, Martek frame and swing arm, suspension and brakes money can’t buy, and a turbo. It makes 320bhp and does wheelies off the throttle in top gear. She is proper, just on with getting her painted so I’ll get some better pics up when she’s 100% finished.  Oh, and my mate Yim has got me a nitrous system to put on her, so my goal now is 500bhp"

How does it compare to Isle of Man?

They are both very unforgiving courses. There’s really not that much room for mistakes. With altitude, temperature changes, atmospheric pressure all changing daily while ascending up the course it’s tricky to find the balance.

What was the biggest surprise or challenge coming here to PPIHC?

The people here are just fantastic, everyone's been so supportive, so friendly. It’s like a big family.

The first day of practice at the top section you had some problems, loaded up the bike early and then came back out to make a few runs. We saw you siphoning out the gas with your mouth? What happened with the bike?

It was running very rough and we looked at the data and talked to some people and found the petrol to be too high grade. We replaced it with pump grade petrol and now she’s much better. With the lower compression (7.5:1) of the bike and the altitude you need lower octane and oxygenated fuel. She seemed to be on pretty good now. The next session we had a fractured fuse -not blown-, fractured, from the sheer vibration of the power.

Is the bike pretty well sorted and a good design for this course?

We think so, we hope so. We're done, it's not perfect, but as of today, (practice day, Friday June 28) it's the best we can do so we'll just leave her as she sits and give it our best.

Have you spent any time with any of the veteran riders or drivers, i.e. Greg Tracy, Bruno, to get a feel for the road, logistics, etc .?

The week before we went down to Albuquerque, New Mexico, we got invited by the Unsers’ to come down for visit. Santa Fe, Taos, It was just fantastic. We just relaxed. They showed us all the trophies, cars, like a museum. You just can't pay for that.

Any future plans or speed endeavors you can share with us?

I’m riding my push bike up the mountain tomorrow.

(Anyone who has even tried to walk around Devil’s playground would recognize Guy as a true elite athlete. He did in fact ride his bicycle all the way up to Devils Playground @12,780’ on Saturday on the rider’s day off with less than a week to acclimate to the altitude. He sported a cycling jersey with the Colorado flag on it, a gift from my wife who works for a pro-cycling apparel company)

What's next for you after Pikes Peak? Any future plans for the Martek? Bonneville Salt Flats Land Speed Record? Daytona 200?

Naw mate, this was a one-off effort. we're done after this. From here It's going back home to be parked as a museum piece. It's now time to move on to the next thing.

Guy planes on competing at Dirtquake riding a Krazy Horse Harley in the chopper class. The event is held over the weekend of July 18 and 19.