In the Curve: My First Bike 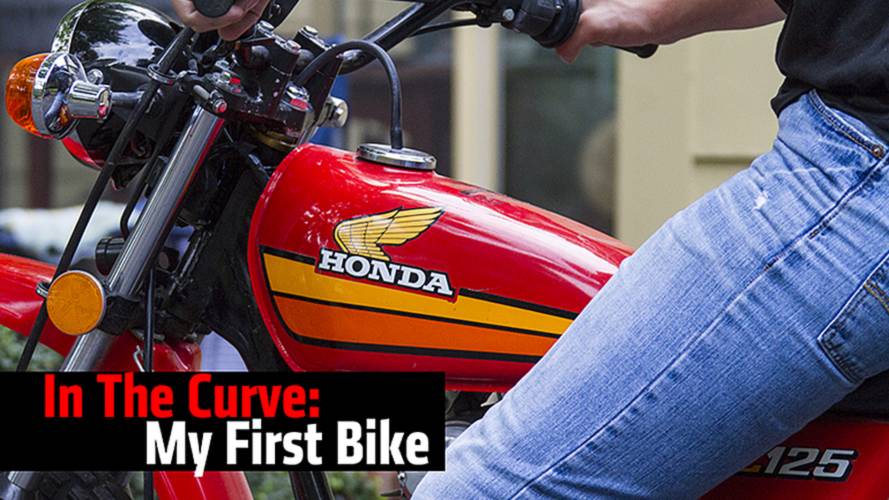 Last night I rode my first bike in almost ten years. A 1979 Honda 125 trail bike and realized that some experiences were better lived in your younger days.

Until last night, it had been almost 10 years since I last rode my first bike, a 1979 Honda trail 125. I always understood it as a trail bike, not a dirt bike-built with high ground clearance. A small-cc, fuel-efficient engine designed for long, hard to navigate trails. A very different experience, unlike a quick, tail-whipping dirt bike. Why? Because that's the terrain I grew up on and know well. I had never seen a motocross track until I was 18. I only knew creeks, abandoned lots and dirt roads.

I grew up in Winston-Salem, North Carolina, and moved to Los Angeles roughly four years ago to take a job with HOT ROD Magazine. I flew home a few nights ago to visit family and hopefully ride some motorcycles through some back country roads.

When I had the opportunity to mount the Honda I gave it a few kicks and the it chatted back to life. The sound took me back to those days of exploring my home town. The leather seat on my thighs felt exactly the same, but when I went to grip the bars it was all wrong. My hands were bent the wrong way and my wrists weren't in the right placement. It didn't fit the same anymore. Like returning to your elementary school as an adult, you can touch the ceiling and smack the hanging signs you always jumped for when the teacher wasn't looking. I had grown up, but the bike did not.

I thought maybe a jaunt down the road would bring back a few more memories that had been filed away. The clutch squeezed the same with the ripped rubber cover and faded finish. It was always soft with a short friction point. So many elements of the bike I remember as a kid but on this day nothing was the same.

I rode out to hear the engine scream again. Grabbing for second, I chuckled as I remembered the intense lack of power the bike had despite its noise. This was the first bike with a clutch, but not necessarily my very first motorcycle.

Have you ever heard of a two-wheeled, motorized, riding lawn mower? When I was five, from summer until Christmas that year I was convinced there was such a thing. I had walked into the basement looking for my dad one day when I saw a frame and two wheels on a table. I asked what it was, "A two-wheeled lawnmower, haven't you've seen one? I'm fixing it to mow the lawn." said my dad in a very convincing tone. Hook, line and sinker, my five-year-old head believed this to be true.

Christmas morning, there sat the two-wheeled lawn mower. With a gloss blue gas tank, black frame, Briggs & Stratton engine and fresh number plate, I was the coolest kid I knew. A vintage Rupp mini bike my grandfather had purchased from an estate auction. Covered in rust, my father restored it replacing the original single-cylinder, kick-start motor with a Briggs & Stratton.

The following summer, my right shoulder started to become a little more muscular than my left. A clear result from pulling on the rope starter so much. Meaning I was getting in plenty of seat time. The pinning of the centrifugal clutch and hard pegs brought back memories when I threw my leg over that bike yesterday. This was technically my first bike, but without a clutch level and gear selector.

The day I turned 16 I wanted two things: my driver's license and my motorcycle permit. I loaded my beloved Honda into my Chevy S-10 and went to the DMV. They set up cones in the parking lot and had me ride one end to the other, with nothing but the scratch of the Trooper's pen on his flip board to tell me how I was doing. It's nerve racking not knowing how your test is going, when the only thing in the world you want is that permit. Luckily, he would stop scribbling and put me out of my misery – I passed. A couple months later I moved onto my Harley-Davidson. A bike I had been building since the following year and spent every dollar I'd ever saved on it.

My father owned a small American Ironhorse dealership in North Carolina that sold and worked on mostly cruiser-based bikes. He owned several shops in his lifetime and so did his father before him.

One day, as a teenager, my grandfather was sitting at a local diner for lunch. A man walked in shaking the rain from his clothes complaining out loud, "I'd give anything for something with a roof on it." He was soaked and frustrating after riding his '30s model Famous James. My grandfather had a 1935 Ford running on seven cylinders. The engine had blown up a month before then so he removed the piston and rod from that cylinder. The two struck up a conversation and traded on the spot. The unfortunate thing was, the car's cowl vent insulation was worn and when it rained water covered your feet.

From then on, he started reading service manuals and books on how to repair motorcycles. When he started a family, my grandmother asked him to not drive trucks for a living anymore and come home. So, in 1967 he opened the Triumph dealership, Lester Kiser Motorcycles.

Jumping on my old bike helped put things in perspective. I work at RideApart to educate and entertain. We're not here to tell you what it's like to ride a bike, but inspire you to go ride for yourself, make your own stories. No matter the feeling, new or old.

For me jumping on my old bike and screaming down a tree-covered street in my home town was a blast, but it wasn't like it once was. Nor should it ever be. That was an experience for a certain period of time in my life.

Everyone has a first-bike story, so tell us what your first bike was. What made you decide to ride? Were you a kid or have you not even been on one yet? Care to just want to try? Tell us below.

I'm in North Carolina for the month of July and set out to find the coolest stuff we can while in the South. Look for a feature on a KTM sleeper next week along with a Real Rider profile of a one-legged man whose been to Sturgis 42 times. I'm set to review a new Indian Motorcycle while I explore my home town again. What do you want to see from the Right coast while I'm here? Are you in NC and want to show us something cool? TELL US BELOW!