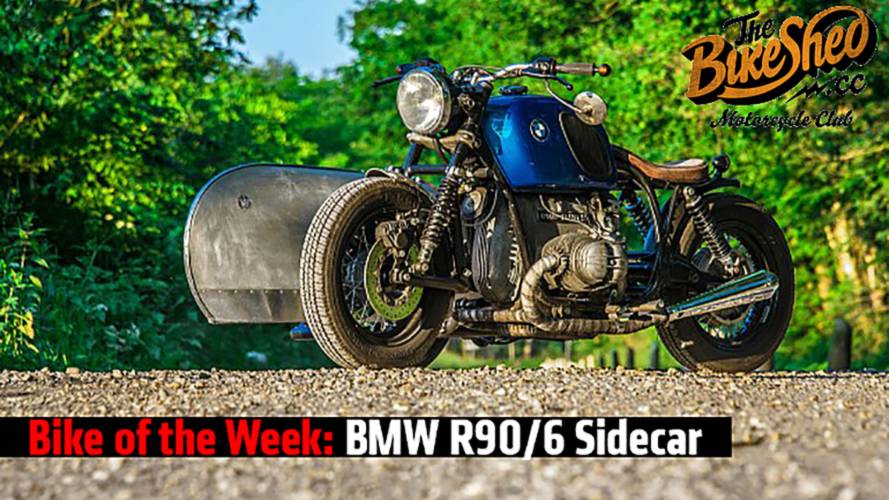 You wanted more sidecar action so we teamed up with our friends at The Bike Shed and came across this stunning BMW R90/6 Sidecar. Enjoy!

Earlier this week we fell in love with a fully restored BMW sidecar outfit parked outside of the Heavy Rebel Weekender show and apparently so did you. A few comments on the blog and Facebook had people, like me, with a strange attraction to the BMW sidecar.

So in search for another Bike of the Week, we decided to feature a not-so-factory BMW sidecar built by Edwin Mensink. Stripped and cut the bike is a custom contraption that touches on new, old and just weird trends. The front suspension features coil-over springs and the sidecar rests in its bare-finish aluminum glory.

Built from a 1975 BMW R90/6 with an early-'50s Walter Wunsche sidecar body fitted to an early-60s Stoye sidecar frame. The wood floor featured a car battery and extra metal inserts mounted inside the body, this produced a better balance and handling.

Edwin knew he wanted to build this bike after riding an R75/5 sidecar. As soon as he jumped off that bike he grabbed a tape measure and figured out how to replicate it with a newer model that had a little more oomph. He found the 1975 R90/6, which he believed would easily accept a sidecar.

If you know your Beamers, than you'll recognize the front suspension isn't factory. It's mimicked after the early style, Earles Forks, but with more modern appearing coil-spring shocks. Earles Forks use front forks that travel backward, towards the bike. At the base mounts a swing arm that connects to the font wheel along with two shocks that bolt from the wheel back to the bottom triple tree, creating a triangulated front suspension.

Designed by Ernest Richard George Earles, the front suspension will actually rise up under braking instead of diving. It was originally designed for use with sidecars and known for great adjustability. Edwin contracted VG Motorcycles to help him finish the metal work and geometry of the front end.

Another overseas-built bike, Edwin hails from the Netherlands. His day job is sailing GPS and built this bike in his home garage with help from friends. Photos courtesy of TheBikeShed.com.

Edwin told The Bike Shed: “The Sidecar combination rides better than expected. It’s just like a go-cart. It handles very well, with a very direct steering which makes it fun cornering a roundabout or corners. Because of its stiff damping she sometimes throws me out of her saddle which makes it a total fun-bike. It really invites you to play with it. I lack experience, but there’s progression every time I ride it.”