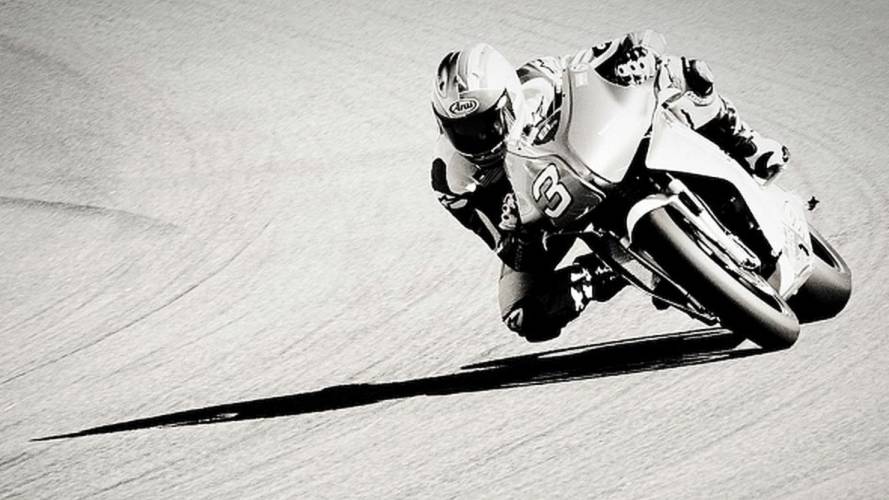 Winning races at the Isle of Man and Laguna Seca and reaching a top speed of 163mph at Bonneville, the 2010 MotoCzysz E1pc is the most advanced electric superbike ever made. Equipped with a liquid-cooled motor delivering 120bhp and 250lb/ft of torque, it also promises to be the first capable of performing like the gasoline-powered sportsbikes of today. We took it to Oregon Raceway Park to find out...

Winning races at the Isle of Man and Laguna Seca and reaching a top speed of 163mph at Bonneville, the 2010 MotoCzysz E1pc is the most advanced electric superbike ever made. Equipped with a liquid-cooled motor delivering 120bhp and 250lb/ft of torque, it also promises to be the first capable of performing like the gasoline-powered sportsbikes of today. We took it to Oregon Raceway Park to find out if the future is worth looking forward to.

Following an RC8-mounted Michael Czysz around Oregon Raceway Park, I’m having trouble keeping up. Not because the 2010 MotoCzysz E1pc can’t match the KTM through the off-camber corners or blind crests, but because all I can think about is what this one-off prototype costs. “$200 to $300,000,” Czysz told me before I climbed on board. More than ten times the cost of the bike he’s now riding.

My fear of destroying a decent-sized suburban house’s worth of Lithium-Ion batteries, carbon fiber and liquid-cooled motor comes to rapid halt when we suddenly run out of juice. But not with the bike you’d think. After a full afternoon’s fast track riding — an estimated 55 miles’ worth — the KTM has run out of gas. The E1pc? It’s got 15 percent battery life left. After over three hours of hard, but not continuous, riding, the MotoCzysz has only travelled 85 percent of its maximum range, all for just a few cents extra on the track’s electricity bill. Still worried about the range of electric motorcycles?

I’m riding the same bike that soared to victory at the Isle of Man’s TT Zero race in June and won the FIM E-Power race at Laguna Seca in July. This same bike reached 163mph at the Bonneville Salt Flats last month.

Michael has no plans to produce any more E1pcs, but he says that if a well-healed customer really wants one, he could build a second for around $120,00, or about the same price as a Tesla Roadster. He’s not trying to do that though, work has already started on the 2011 model.

With a row of  five exposed batteries highlighted by blue-glowing LEDs running down each side and a tiny tail section designed to allow the rider to slide back into a more aerodynamic riding position, the E1pc looks like no bike before it, but it does look like the future. Aside from the electrical components, including the oil-cooled motor hidden inside the swingarm, the E1pc makes use of other prototype components invented by Czysz. There’s the 6X-Flex forks that allow sideways flex suspension action at extreme lean angles and minimizes unsprung weight and complication with a single Ohlins monoshock mounted in front of the headstock. The “frameless” design includes an abbreviated carbon subframe that attaches the front suspension to the battery suitcase and serves as a duct to flow air from the front, through to the top of the rear wheel to break up the low pressure point there. Rather than the dual rear springs of the gasoline-powered C1, this E1pc uses a centrally-mounted rear monoshock because of that somehow tiny motor being positioned inside the swingarm. That motor makes 120bhp and 250lb/ft at the wheel, but is smaller than a single one of the three Agni motors Czysz ran last year thanks to its oil-cooling, which eliminates the need for significant added metal mass to serve as a heat sink. Oil cooling also allows the motor to operate continuously at a point close to its peak power. Those above figures can be delivered as long as the batteries hold out, not for mere fractions of a second as on air-cooled designs. The whole thing weighs just 525lbs, ready to ride.

To start the E1pc, you have to disable two safeties, switch the kill switch to “on,” then...nothing. No noise, no vibration, just a tiny green LED glowing in the otherwise incomprehensible instrument cluster. Starting needs to be this complex because there’s no other sign that the motor is on, but twisting the throttle now will deliver acceleration.

Accelerate it does, but not right away. Open the throttle, wait a second, and after a brief hesitation the E1pc will carefully pull away. Michael says the program that restricts torque delivery at low speeds needs more work, but that the system is calibrated for road racing anyways, not the stop/start of city riding.

Compact like a supersport 600, Michael’s tailored the riding position for his own 6’ 1” frame (he raced it himself at Laguna). At 6’ 6”, the pegs are impossibly high for me. Add in the very low handlebars and I can barely fit onboard.

Pass 20mph and the onboard computers start to allow more torque. As it actually starts to work, the motor also starts delivering its spaceship whoosh sound. I’ve ridden just about every other electric bike and this one sounds like nothing else on earth. With no vibration, no gearshifts and no clutch, the motor starts moving you forward like a giant invisible hand pushing you along.

At these speeds, the throttle is direct, clear and works without hesitation. The E1pc is, dare I say it, easy to ride; an especially good thing on a track this complex. It’s not until 60mph that the motor is free to deliver its full power and torque. Above that speed, acceleration feels at least as strong as an R6 at full throttle. Very fast, if not liter bike strong. Unlike the R6, there’s no 16,000 rpm scream or the punctuation of gear shifts, but that’s not to say there’s no aural sensations. The motor sounds like the Millennium Falcon kicking into warp drive.

Approaching turn 1, it’s not the futuristic powertrain that catches me out, it’s the race-quality brakes. A brush of the front level pushes the slick front tire into the track and I nearly come to a complete halt. There’s no doubting that this is indeed a racing motorcycle. It’s OK if you screw up the entrance of a turn though, the 250lb/ft allows you to make up time on the exit.

Exploring the limits of the E1pc’s chassis is made difficult both by my size — shifting side to side is particularly difficult, but it feels like the bike should steer reasonably fast — and my knowledge of how much it’d cost me if I make a mistake — but at these speeds I’m reminded most of a Hayabusa. Like that bike, the MotoCzysz carries its weight very low, but the comparison ends there as the wheelbase is much shorter and the forks raked far more steeply.

Unlike other electric bikes, the E1pc is equipped with regenerative braking, which feels just like engine braking as you roll off for a corner, but helps add some range to the batteries as it recovers kinetic energy. I don’t even miss the clutch.

As I pull back into the pits and pull of my helmet to tell Czysz what I think, we both detect the smell of burnt brake pads. My size 13 Sidis had been unintentionally dragging the rear brake all the way around the track. “I swear, it’s a lot faster when you let off the rear brake,” mocks Michael.

“The 2011 model is scheduled for January,” says Michael back at his Portland HQ. “It will be lighter, more powerful and have even more component integration. For example, there’ll be a single cooling system instead of the three it now has.”

“If you compare the 2009 version — the one that failed at the Isle of Man — there were too many wires and too many chances of a problem. And the Lithium Phosphate batteries were wider and heavier. On this 2010 version, there is a single engine delivering the same power and just one controller.”

“We are refining the programming of the regenerative braking to try to stick as closely as possible to an ICE engine brake. The software can be customized based on the tastes and needs of the rider.”

As we talk, Terry Czysz, MotoCzysz mechanic and Michael’s dad, is re-installing the 10 1.25kWh battery packs back on the bike. It only took three hours and 40 minutes to charge them fully on standard 110v/10amp outlets. At his pace, Terry takes, at most, five minutes to reinstall all 10 battery packs.

“See, in race conditions with two guys, one on each side, we can change the batteries in less than a minute,” says Michael. “We are ready for Endurance!”

David Folch is the tallest San Francisco-based, French motorcycle journalist in the world. He rode the E1pc at Oregon Raceway Park and took these pictures of Michael riding it at Laguna Seca and in Oregon.