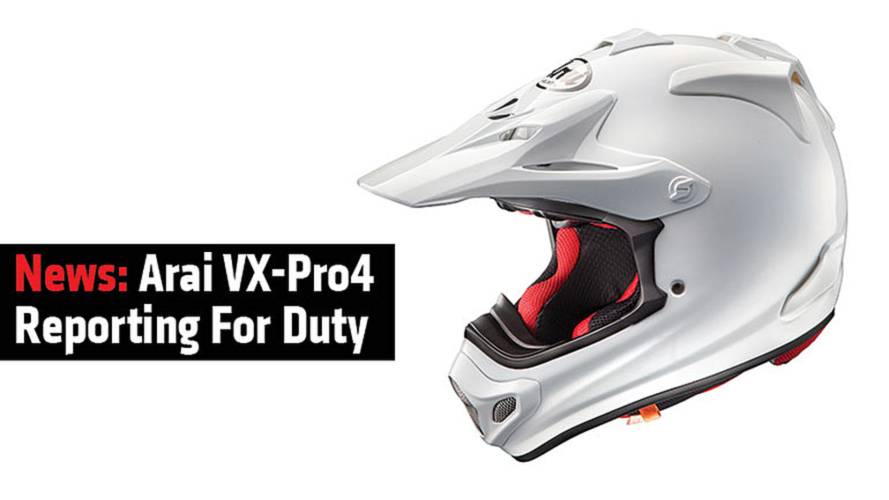 Expanding on their success of the VX-Pro3, the new Arai VX-Pro4 expands on their safety technology and improves comfort across the board.

That said, I’m willing to give Arai the benefit of the doubt. The venerated Japanese helmet manufacturer announced the release of their latest off-road lid, the VX-Pro4, and if their press kit speaks true, it sounds like another great offering from a company that’s known for quality helmets. "The founder of Arai was a rider who made the first helmet in Japan for protection of his own head. Arai was carried over by his son who has been a rider, too. So, the top managements of Arai have always been riders throughout its long history.”, as the press kit reminded of us of just how personal safety means to the company.

The VX-Pro4, like many of Arai’s helmets, is not for the light of wallet. The price range on the helmet is expected to range from $599.95 to $609.95 for solids. Those looking for fancy graphics or racer replicas can expect to drop $729.95 to $739.95. That’s a fair chunk of change for an offroad helmet, but Arai says that they have upped their game with this model, and is clearly targeting the serious dirt rider.

As with all Arai helmets, the VX-Pro4’s shell is hand built; the VX-Pro4 is modelled to match the company’s R75 shape concept – Arai claims that this shape causes the VX-Pro4 to glance more easily off of objects during impacts, resulting in a safer helmet. The helmet’s rounded chin bar gives it the same shell length as the VX-Pro3; Arai believes that this makes the VX-Pro4 less likely to catch or dig should the rider crash.

The exterior and interior of the helmet sport several new features. The chin bar vent grill now mounts from the outside and according to Arai can be easily removed for cleaning or damage replacement. It’s also designed to break away from the chin bar during a spill. Arai promises greater ventilation than the VX-Pro3 thanks to upgraded top front, top rear and side port ducts. The helmet’s peak is 14mm longer and 5mm wider, with larger air outlets – Arai believes that this will help reduce lift and buffeting. And the VX-Pro4 features goggle strap locators; these will be in the side port cowlings and top duct center brace, and were added to help keep goggles in place while on rough terrain at high speeds. Inside the helmet, wearers will find a removable neckroll and Arai believes they’ve improved their emergency cheek pad release system, by making the tabs easier to access by rescue staff.

The VX-Pro4 is expected to be released in October of this year. Hopefully we’ll get our hands on one for review, to see if Arai can deliver on its claims.