WSBK Takes On The Corkscrew In Monterey 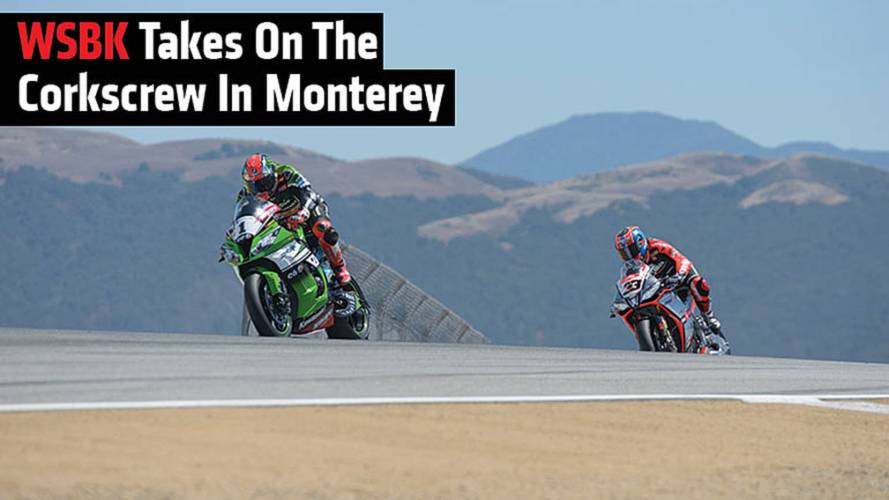 WSBK hosts its latest race at the historic Mazda Raceway Laguna Seca in Monterey, CA without the MotoGP in tow the races were intense and the fans thrilled!

Pulling up to the gates of Mazda Raceway Laguna Seca in Monterey, CA was an odd feeling this year. The big racing weekend in this summer was missing the usual headliner. MotoGP was absent from the docket this year but the World Superbike (WSBK) and AMA Pro Road Racing series had no problem filling the paddock.

However, this resulted in an obvious drop off in attendance that was apparent before even entering the track grounds. The typical queue of cars lining Highway 68 and sea of parked vehicles covering nearly every open field of the county park were nothing to worry about this year. Driving right through the main gates, winding up the access road, down into the interior of the race track and parking in a prime location usually reserved for VIP’s was routine this weekend. Though disappointing from a sport promoter’s standpoint, this was bliss for spectators.

Fans had an excellent choice of viewing locations around the race track without having to show up right when the gates opened to claim ground. The paddock area was relatively wide open with celebrities in the racing world walking all over the place willing to chat with fans throughout the day.

Events like Ducati Island and Kawasaki Ninja Nights were not overcrowded allowing those in attendance a much more intimate experience. Accommodations were just as great as a MotoGP weekend with local police directing traffic (or lack thereof), security and race track workers leading fans around the park and more vendors and food stands to know what to do with. The relatively low attendance made for a much more intimate setting and a unique opportunity for fans to get a seemingly personal look at professional racing operations.

The US stop for WSBK might not have drawn the large crowd the racing, however, was no less intense.  Race one was slotted for 11 AM on Sunday morning. When the green flag dropped, the action ramped up immediately with Tom Sykes on the Kawasaki Racing Team ZX-10R running away with the hole shot only to blow the Turn 8 corkscrew on his first run through turning the lead over to the Aprilia Factory riders, Marco Melandri followed by Sylvain Guintoli. The pair of RSV4 Factory’s was able to hold these top two positions respectively with Sykes salvaging a podium position in 3rd. The Ducati Superbike Team just missed the podium with Davide Giuliano finishing in 4th on his Panigale 1199R EVO covering for his teammate Chaz Davies who went down early in the race costing him the rest of the weekend. The only two Americans who completed the race were Geoff May in 18th on his EBR 1190 RX for Team Hero EBR and Chris Ulrich in 19th on the GEICO Motorcycle Road Racing Honda CBR1000RR as a wild card entry.

Later in the afternoon, Race two proved to be very eventful. Similar to Race 1, Tom Sykes jumped into the top spot right off the bat with Melandri and Guintoli in hot pursuit. The 4th position was occupied by another Aprilia piloted by Tony Elias. As the battles throughout the field were heating up, Alex Lowes came into the corkscrew a bit too hot, rear ending Loris Baz on lap 11. Lowes was down for the count forcing a red flag to be thrown. A seven-lap restart was declared allowing Melandri to take the lead this time only to see the red flag again after three laps as a result of Sylvain Barrier going down hard in turn eleven, just before the main straight. When the green flag was flown once again, Melandri jumped back on top with Sykes hot on his tail. Elias was able to maintain 3rd with Guintoli in 4th and Jonathan Rae in 5th on the PATA Honda CBR1000RR. However, after just two laps, Melandri was claimed by turn eleven as well but in far less spectacular fashion than Barrier. A few laps later, spectators up in the corkscrew witnessed even more action as Giuliano lost traction, sending his Ducati down the hill and came to rest right in the middle of the race track. Despite this dangerous obstacle, the race continued and Tom Sykes pulled away with the “W” followed by Guintoli and Rea in 2nd and 3rd respectively. Eugene Laverty was able land his Voltcom Crescent Suzuki GSX-R1000 in the 4th place position followed by Toni Elias in 5th. The hometown heroes were able to finish in 14th, 16th and 17th with Larry Pegram on the Foremost Insurance EBR 119 RX, Geoff May and Chris Ulrich filling these slots.

Tom Sykes wheelying out of Turn 3

Though without the premiere motorcycle racing class riders, the race weekend at Mazda Raceway Laguna Seca this year proved to be a very exciting and unique opportunity for the fans that made the trip. The WSBK riders put on two action-packed shows while fans were able to spectate with relative ease and convenience. We hope to see the big boys of MotoGP back a Mazda Raceway Laguna Seca in the near future but the WSBK series is an excellent substitute with arguably better racing competition in each round.