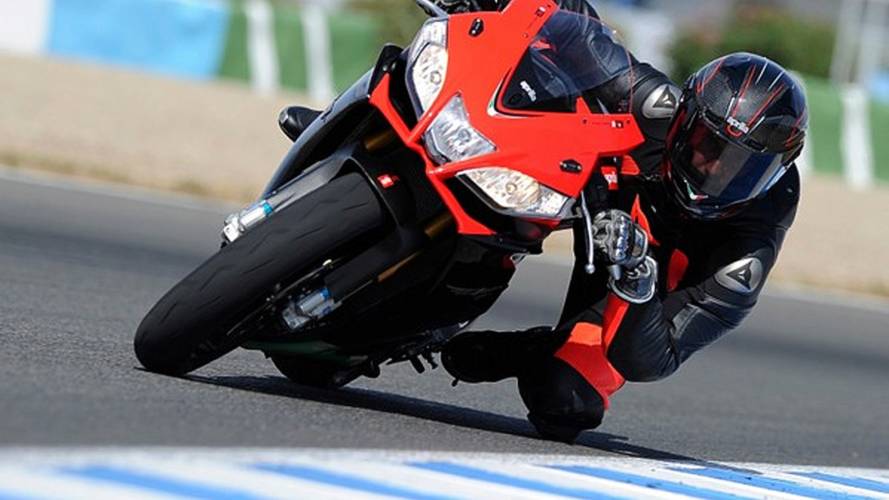 Take an impressive list of performance-boosting electronic widgets: adjustable traction control capable of self-adjusting to different types of tires, launch control, a quick shifter with bar-mounted buttons and wheelie control, then add all-carbon bodywork and a full Akropovic race system to that package. What do you have? Surely the most technologically advanced and desirable superbike currently...

Take an impressive list of performance-boosting electronic widgets: adjustable traction control capable of self-adjusting to different types of tires, launch control, a quick shifter with bar-mounted buttons and wheelie control, then add all-carbon bodywork and a full Akropovic race system to that package. What do you have? Surely the most technologically advanced and desirable superbike currently available.

Update: a little more info on the + and - buttons and what they do plus a video.

If the Aprilia RSV4 Factory with its 180bhp, 85lb/ft V4 engine, fully adjustable (including rake and trail) Ohlins suspension and ridiculously tiny proportions weren’t enough, for 2011 Noale is releasing the Aprilia RSV4 APRC SE special edition with the above mentioned whizz bangery and if that wasn’t enough, through their accessories catalog, you can order this carbon body, that Akropovic exhaust, an SBK-spec CNC-milled top yoke and even 16.5-inch forged Marchesinis so you can run the best slick tires. There’s no word on pricing for any of that, but expect a hefty addition to the Factory’s $20,999 base price.

Of course, the really interesting and significant thing isn’t the optional bling, it’s the presence of an unprecedentedly sophisticated electronics package on a production superbike. The Aprilia Performance Ride Control package offers comprehensive and comprehensively adjustable tweekability for the RSV4’s performance and handling.

In addition to the electronics, APRC brings bespoke, dual-compound Pirelli tires with a 200/55 rear.

At the heart of the APRC package are sophisticated sensors intended to arm the onboard computer with a complete picture of what the bike is doing at any given time. These include two gyroscopic sensors capable of determining the bike’s exact attitude (including lean angle) in three dimensions and two accelerometers to determine how quickly it’s accelerating or turning in addition to wheel-speed sensors front and rear. All that data then informs the application of the electronic aids.

Aprilia Traction Control is an eight-position, rider-switchable system that proprietary to and patented by the Italian performance bike manufacturer. Focussed on adding performance rather than safety like the 2011 Kawasaki ZX-10R’s S-KTRC, ATC also recognizes that under some conditions, such as exiting a corner, some wheel slip is actually needed to achieve maximum acceleration and only gently reduces torque to keep that slide from getting out of control. In addition to the rider-selected levels of sensitivity, ATC is also self-adjusting to accommodate for different tire sizes, profiles and levels of grip. To achieve this, the rider activates a learning program which enables the on board computer to determine the tire’s characteristics.

Hitherto the preserve of high-dollar race systems, the APRC package also inclued Aprilia Wheelie Control. Using the gyroscopes and accelerometers, the computer is able to detect when the front wheel leaves the ground, gently reducing torque to return that front wheel to the road. The system is tailored to delivery maximum acceleration, not simply to keep the front wheel down. Like the other components of APRC, AWC is individually adjustable and activated.

To the best of our knowledge completely novel on a road bike, Aprilia Launch Control allows you to give the bike full throttle, release the clutch, shift through the gears and achieve maximum possible acceleration from a standing start. ALC handles traction and wheelie control so all you have to do is keep the throttle pinned and concentrate on the braking point for turn one. There’s three modes and the system must be armed before each launch by pressing and holding both traction control buttons on the left handlebar at the same time.

Other bikes have had quick shift before (notably the Ducati 1198 SP includes it this year), but we’ve never seen a system integrated so well as standard. Shift buttons from the Aprilia Mana 850 are placed on the left bar, allowing the rider to shift the RSV4 at the push of those buttons without touching the clutch or closing the throttle. You can also use the traditional shift lever. Working in cooperation with closer gear ratios, the system shortens spark advance for a brief second, allowing the shifts to take place with minimal RPM loss between gears. The timing of that cut changes with RPM levels. Downshifts are aided by the slipper clutch.

Compared to other, similarly advanced (but cheaper) electronics packages on the market, APRC has a clear advantage over the BMW S1000RR in that it offers wheelie and launch control as well as that quick shifter. It has the same advantages over Kawasaki’s S-KTRC, with the possible addition of being able to sense lean angle, something it’s not clear if S-KTRC can achieve.

There's 46 photos of the Aprilia RSV4 APRC SE in the gallery below.