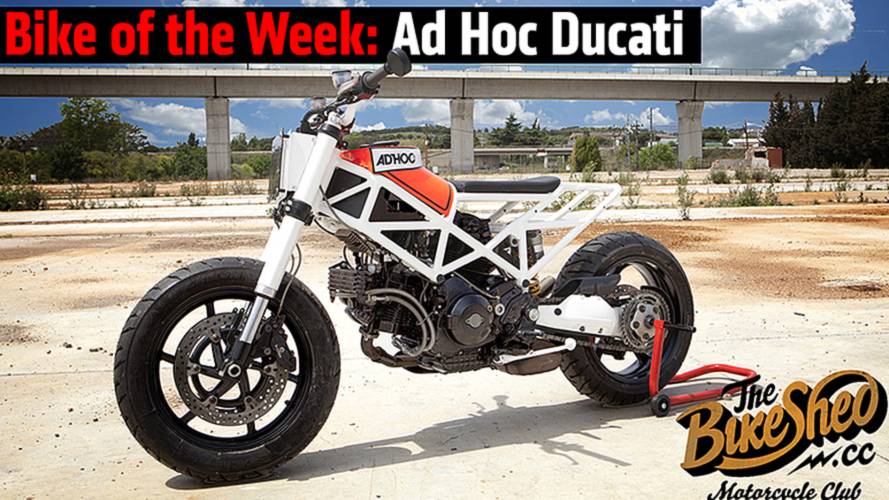 Bike of the Week: Ad Hoc Ducati More than aesthetics, I’m about engineering. Alright that’s not exactly true, as I’m with the worst of you when it...

More than aesthetics, I’m about engineering. Alright that’s not exactly true, as I’m with the worst of you when it comes to mods for the sake of just looking cool. I respect builds that aren't easily understood. A bike that becomes a teaching tool in some new method or idea of what is a motorcycle. Even if it handles like dirt or slower than a bicycle, if it was built with thought, planning and talent, I like it.

It also doesn't hurt when you have balls either, like tearing a down a new Ducati. This bike was built by Barcelona-based Ad Hoc and executed beautifully where, luckily, performance wasn't sacrificed for coolness. Starting with a 2004 Ducati Multistrada 1000DS, Ad Hoc showcased the Ducati engineers's talent in building a great bike by keeping with the original lines, just without the butt-ugly fairings and body work.

Called Haptica, which is based on a Greek word that means communication by touch. With the narrowed and cut-down Ducati chassis and engine, this bike speaks to it's viewers the best by way of the seat and handlebars.

Pulling pieces from other Ducatis the Ad Hoc team started with a Hypermotard tank, but it didn’t look right, so it was quickly ditched. Instead they removed the original cover that enclosed the airbox and wiring harness and put a tank back up top. They then implemented creative ways of packaging the rest of the guts into now tighter quarters. Starting with clay buck, they then hand-laid sheet metal over the buck to complete the tank.

This is where the skill and subtlety of the bike comes into play, as the frame was rebuilt to keep the strong lines up around the new tank, enclosing the uncovered air box and harness below.

Black and white, the bike features powder coated white frame and inverted fork front end. The Chunky Easton bars are also powder coated white to match. The Perspex-cover rectangular lamp--that looks better suited for your ceiling than a motorcycle--is hard to miss, but we do like some things done for the sake of being cool.

For the full skinny on the bike be sure to check out our friends at The Bike Shed.