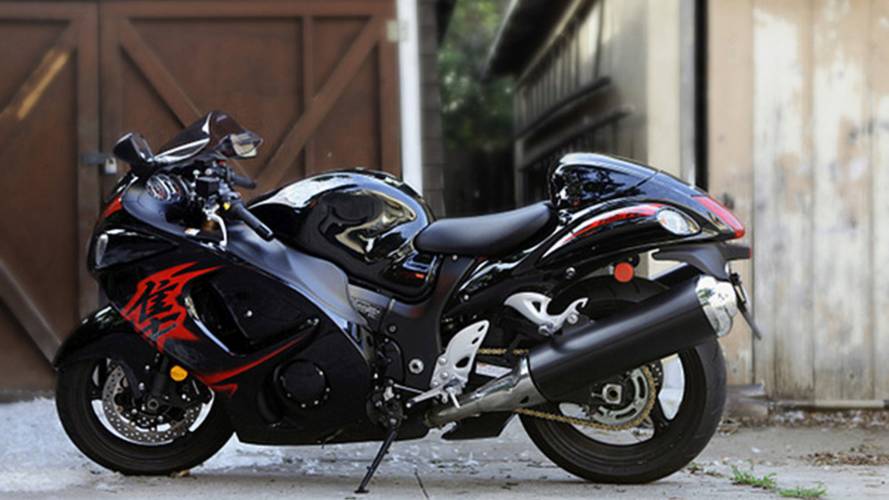 Motorcycles are like women in that it is very hard to become interested in one you don’t want to fuck or fall in love with. That leads to the obvious question: who would want to do either to a Hayabusa? I think I know the answer. Let’s see that tootsie roll. Photos: Magda Wosinska The 1340cc Law Master with the cage fighter tattoos distinguishes itself from a standard sportbike not onl...

want to fuck or fall in love with. That leads to the obvious question: who would want to do either to a Hayabusa? I think I know the answer. Let’s see that tootsie roll.

The 1340cc Law Master with the cage fighter tattoos distinguishes itself from a standard sportbike not only in appearance but also in that is has twice the engine most of us require from something that fits between our legs.

The cultural baggage which saddles the Hayubusa has led me to question whether,

intentional or not, its success in reaching a certain ethnic minority in America was

through the appeal of its unique aesthetic. This bike is bought by black guys, which, bear

with me, leads me to presume that this bike it bought by the men that love big arses.

confirm that a large manure spreader is an absolute must to garner sales. No secret and

nothing to be ashamed off. Videos and album covers cement the concept that a giant

pooper trumps tremendous titties any day of the week. Starting to see a connection? Has this bike been conceived for the booty connoisseur or has its posterior inadvertently drawn the

attentions of the ass worshipper?

The Hayabusa’s designer, Koji Yoshiura approach to the design was to build a powerful bike

that looked like it had muscle tone. Koji-san has been quoted as saying “I created a somewhat grotesque design in the hopes of creating a strong initial impact.” Mr. Yoshiura, I think we can safely say that you have achieved your goal. But what does this do for my theory?

Having never ridden a Hayabusa, I started the bike and was surprised at how little sound

the stock exhaust produced. Pulling onto the freeway felt more like piloting a 7-series BMW than a 195.6 horsepower widow maker until my wrist decided that it was Hadron Collider time.

There is one word that best describes the results. Fuck. After a brief and unscheduled

power wheelie I nicknamed the throttle “You want the truth? You cant handle the truth.”

Unlike a puny literbike, the Hayabusa’s engine power seems to stem directly from a

connection to a volcanic fault line somewhere beneath the tires. Broad, wide, ancient. I

the 405 North is not the best place to see how quickly I would reach the limited 186mph, although I came pretty close in complete comfort.

Ex-GP racer, ex-TT racer and current dog lover Jamie Robinson had nothing but good things to say about what he calls “the fat girl.” Turns out I was currently riding sloppy seconds on the same press bike he’d just had. A blast up mountain roads just outside LA with his buddy on a GSX-R left no doubt about whether or not the bike’s cholesterol level was a factor in road performance. Jamie sung the praise of its power, its brakes and said the bike’s weight would only be a problem for the rider without the plums to “chuck her about a bit” in the turns.

But for me, the performance of the bike was quickly becoming overshadowed by the styling. All my life I have seen any connection to an instrument of speed as a love affair, but now, for the first time, I was becoming just friends with a motorcycle. This silent monster took me everywhere I wanted to go in comfort, without complaint and when I gave it a little twist it would soften my stools, but I just couldn’t fall in love with riding something this ugly.

So, I decided to create my own logic out of the assthetic and enlisted the help of a local

Argentinean nicknamed “The Onion” because her booty apparently makes men weep. Once the plastic camel’s hump was replaced for a rear seat and The Onion was gently lowered into place the planets aligned and lust once again entered the equation. The quintessential aftermarket part for this bike is not an extended swing arm or chrome iron cross mirrors. This bike requires a rear passenger with large, shapely buttocks for it to achieve symmetrical harmony. I think Koji-san was an ass man after all.