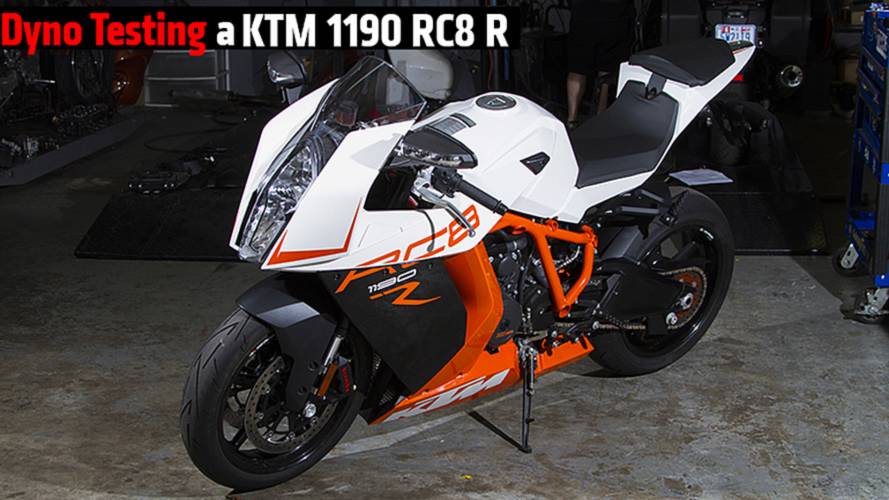 We stumbled upon a freshly tuned KTM RC8 1190R headed for a few pulls on the dyno so we tagged along to see what this intimidating machine could do.

What kind of power does this bike actually make? You can read spec sheets, listen to press releases and forum claims until your sick, but you don’t really know until it hits a real-world dyno.

The KTM RC8 1190R was a disastrous let down when it first hit the American sportbike scene in 2010 (2011 model year). An extreme track bike with unique aerodynamic body work, it looked as though it would decimate anybody on the track. But the Austrians were a little too early on development, producing a scary, clunky drivetrain and lackluster power numbers from its 1,190cc V-twin. Not to be outdone, KTM returned the next year with more power and a far better transmission. As years progressed so did the quality of the RC8, resulting in a bike that competes with the best large-cc sportbikes in its class.

While on a trip through North Carolina I stumbled across this 2013 KTM RC8 1190R at Kevin Powell Motorsports in Winston-Salem, NC. They talked a big game about the scary power of the bike which features a handful of bolt-ons.

First, the gnarly exhaust note is courtesy of a complete Akrapovic EVO4 Titanium exhaust system including the slip on. That sound doesn’t come cheap at $4,510 and it’s a race-only application so the guys installed 02-sensor bungs. The team also used a KTM racing air cleaner and Kevin Powell’s KTM rep came in and installed the KTM race map for a more aggressive tune.

The rear sprocket received two extra teeth for more bottom-end power at the sacrifice of top-end. A couple other items were added like an alarm system and a 120R roller chain.

Our dyno tech for the day complained that the KTM tune was too fat (rich), something KTM probably did so they didn’t risk blowing up the engine if it were to get too lean. Tech Richie McPherson, made two passes (as before we got there the guys had already put the tune on it) making 153.82 hp. We didn’t play with the redline, but it seems the engine could use some more RPM, as the power curves were on a steady upward charge. Motorcycle-USA.com made similar numbers (158hp) with the same exhaust and map. Our dyno used the SAE correction factor.

The differences in HP can be the dynos’ fault or a correction coefficient difference but we think it could be the higher rear sprocket, which has been known to hurt HP by a couple points. While the gearing difference is hugely noticeable in the seat of your pants, reaching redline quicker, the bike actually loses a couple points on the dyno.

KTM has shown its desire to win, and at the moment, the power is slightly down compared to the competition. With the huge advancements they’ve made over the last couple years of development, we can’t wait to see what they’ll do with the RC8 in the coming production years.

Additional note: The bike is currently for sale if you'd rather not piece everything together yourself.