If you want an electric motorcycle designed right, you’ve got to design it yourself 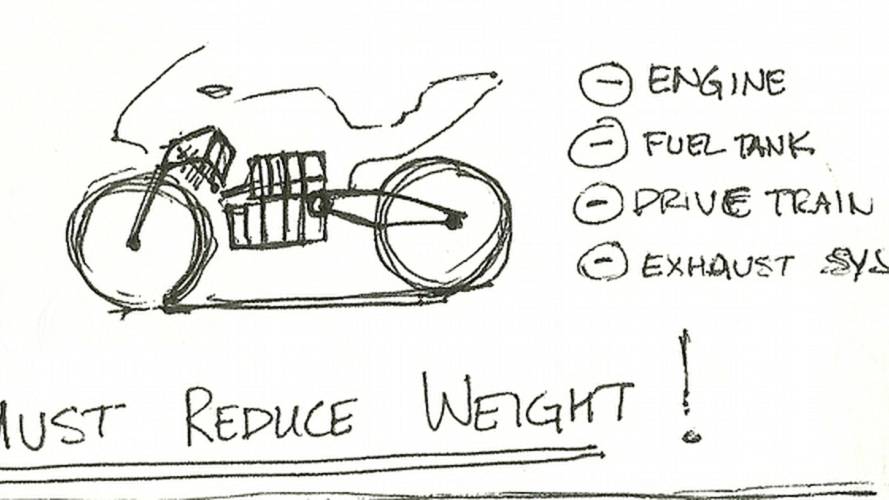 Ever since I saw the first modern electric scooters in the middle of last decade, I’ve felt the time was right to start approaching motorcycle design like that of an airplane, integrating the body, frame and battery into the same structure. Doing so can drastically reduce size, weight and complication, all of which I hope I’ve achieved with this, the Amarok P1. Unlike the giants it will race a...

Ever since I saw the first modern electric scooters in the middle of last decade, I’ve felt the time was right to start approaching motorcycle design like that of an airplane, integrating the body, frame and battery into the same structure. Doing so can drastically reduce size, weight and complication, all of which I hope I’ve achieved with this, the Amarok P1. Unlike the giants it will race against in the TTXGP series this year, it’s the size and weight of a 250GP bike. I’m hoping it goes like one too.

The Amarok concept has been long in coming. It started forming in my head when as a 23 year old I arrived in Europe and discovered that small, lightweight motorcycles were far more fun to ride than big, powerhouse superbikes, and ultimately made for better riding and riders. It continued while I worked for GK Design, where designing for Yamaha meant being educated by masters and the virtues of balancing power with agility, handling, economics and safe operation. It culminated in late 2007 when I witnessed and had an opportunity to ride the Vectrix scooter, the first modern electric production motorcycle, and saw for myself the enormous potential that electrification held for an industry trapped by involution; a long and enviable heritage but one that ultimately enforces technical traditions and dogma.

After I left Bombardier Recreational Products in 2009, I searched for something to do that would have meaning for me personally, but also something that would make an impact in the industry that I love. Amarok Consultants is my avenue for channelling my years of experience into a business that is often unforgiving of risk, but at the same time searches for the new.  With electrification in the news on a daily basis; with start-ups popping up everywhere; and with the mainstream OEM side still recovering from the crushing effects of recession, the only answer was to be bold, and produce a vehicle that showcases my beliefs in what a motorcycle can be.  Not another foam and body filler "concept" model, high on flash and thin on substance, but a real living motorcycle that is designed from the ground up, from a white paper into reality using a mission-centric approach.  Not just a new electric motorcycle, but a new architecture for a new technology paradigm.

The Amarok P1 began as a rough schematic sketch made in a notebook in 2007, a week after that year's EICMA motorcycle show. My partners and I had poured over a cutaway of the Vectrix electric scooter, and were surprised by the radically re-imagined internal package. Being sport bike people, we toyed with what possibilities lay ahead, but were shut down by the cost, poor range and vitally, the disproportionate weight of the Nickel Metal-Hydride batteries. The idea was forgotten until I rode the scooter in Barcelona the following spring, and was completely taken by the ride quality, acceleration and silence of electric drive. Only two things could save the electric motorcycle, I thought:  newer and better batteries; and a radically lighter vehicle system.  When Lithium battery chemistry proved the viability of the modern EV, I felt that the former had finally come, so I drew this sketch to try and deal with the latter.  It laid dormant for years, until last winter when misfortune met opportunity.

Batteries are the great constant in EV design. Regardless of supplier, they comprise the largest, heaviest and bulkiest component in the vehicle system, which makes them awkward to contain. Traditional motorcycle architecture places all powertrain components within a frame, roughly hanging off of a bridge-like structure that spans the beam from the steering head down to the swing arm pivot.  Whether steel tubes or aluminium spar, it consumes space and leaves a roughly vertical hole in the middle.  Forcing batteries and electric motors into this space is difficult, inefficient and requires lots of additional structures to hold them. All of this adds weight.

Today's electric motorcycles, both mainstream and prototype, all use some form of beam frame to support the bike, and another to support the batteries. Nearly all of them attempt to match, or in some impressive cases, exceed the performance of gasoline superbikes. To achieve this goal they must employ a vast number of batteries – over 10 kWhs worth – and therefore a vast amount of material to support them, all of which adds a tremendous amount of weight. The lightest weigh 220kgs (485lbs), while the heavyweights can reach as much as 250kgs + (550lbs). The toll this mass takes on suspension, tires, brakes and structures forces compromises in design, leading to high speed instability or an inability to turn easily in corners, a traditional motorcycle strength.  Every kilogram of battery you add multiplies because you need to add strength in other areas to compensate. The solution seems to be to bludgeon physics with technology and high cost materials, in an effort to band-aid the problem of excess weight.  We see it another way.

Less battery capacity ought to mean lower performance and less range, but it depends on how much work it needs to do. Using the ubiquitous Agni 95 powerplant, due to it's excellent power-to-weigth ratio and proven history as the most successful motor in electric motorcycle racing, may put us at a significant disadvantage to others with high power outputs, but the total vehicle system weighs less than theirs. Physics is physics and less mass means that a 70hp, 150kg bike is as fast as a 120hp bike weighing 240kgs, but handles better and is cheaper to produce. Amarok thinking means using the rules of physics to advantage, not fighting it like an enemy.

The P1 is the size of a 250cc grand prix motorcycle, with similar dimensions and similar performance. It is our goal to demonstrate the viability of lightweight thinking; that clever use of materials, innovative construction methods and, above all, a clean sheet methodology that keeps design decisions concentric with the mission, reduces weight, waste and time in designing a motorcycle.

Like its namesake, the Arctic Wolf, the Amarok P1 is not the fastest, most powerful or radical beast out there, but rather a long range, strong and diligent hunter which uses intelligence to overcome enemies many times stronger. It is, we hope, a lightweight, flickable, true trackday scalpel that can dive on the inside line of The Corkscrew and never lose its composure. An intuitive racer's machine.  In other words, an uncompromised racing motorcycle.

Hell For Leather readers are getting an exclusive first look at the Amarok P1, look for it to be unveiled in full next week, when more pictures and more information will be available.