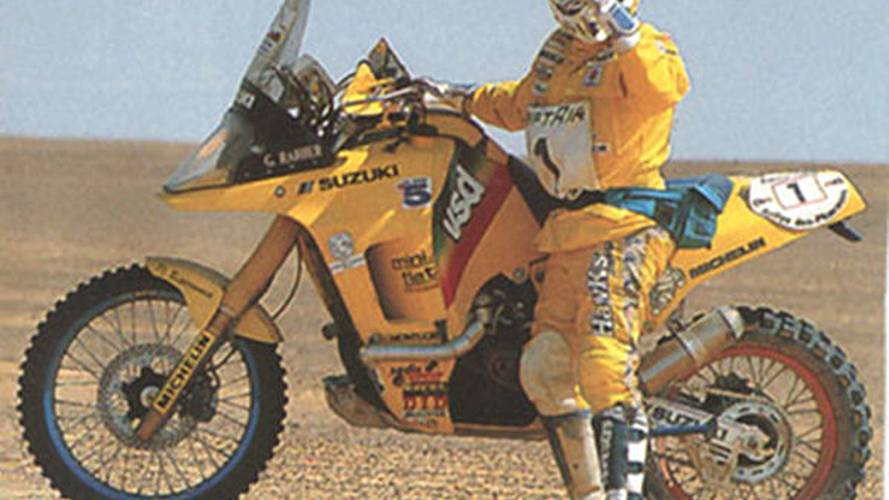 Arriving after the adventure touring segment had been invented by the likes of the BMW R80GS and Yamaha Tenere and before it was popularized by two twats with support trucks, the little known Doctor Big can’t claim to have had much influence on motorcycling as a whole. It can claim to have had a huge impact on motorcycle styling. Released in 1988, this Suzuki represents the first known example o...

Arriving after the adventure touring segment had been invented by the likes of the BMW R80GS and Yamaha Tenere and before it was popularized by two twats with support trucks, the little known Doctor Big can’t claim to have had much influence on motorcycling as a whole. It can claim to have had a huge impact on motorcycle styling. Released in 1988, this Suzuki represents the first known example of the now common pointless-front-mudguard-thing and is trotted out by Triumph as proof that the Tiger 800 doesn’t rip off the F800GS’s design.

We first learned of Doctor Big, or “Desert Express” as he’s known by people with more mature senses of humor, in something of an aside in Kevin Ash’s Tiger 800 review about Triumph being peeved that people (read: us) think the Triumph is unmistakably an effort to copy the GS’s design. It is, but Triumph argues that the BMW itself is simply a copy, of this Suzuki. And thus Doctor Big’s place in history is assured.

Initially released as a 52bhp 727cc in 1988 and then a 54bhp, 779cc in 1990 the DR lived up to it’s “Big” monicker. Sure, the F800Gs and Tiger both have 800cc motors too and 1200cc is now considered normal for the class, but the good DR’s entire capacity was composed of a single-cylinder. That was good, because it branched off from the adventure touring evolutionary tree to be more of a dirt bike that could also just about manage a highway than a highway bike that could just about manage some dirt. Suzuki’s process for achieving that seemed simply to be take a dirt bike and make enormous.

Like most other bikes in the segment, Doctor Big was born with some serious Paris-Dakar cred. Gaston Rahier rode for Suzuki for a couple of years in the late ‘80s after his famous victories for BMW helped stamp the GS name in history books. Perhaps its this heritage which explains why the Desert Express initially came with a 7.7-gallon fuel tank allegedly so large that riders struggled to straddle it with their legs. In 1991, that tank was reduced to a mere 6.3 gallons.

That giant fuel tank wasn’t Doctor Big’s only problem, owners also complain of the ridiculously tall 34.5” seat height, cheapo suspension and weak front brake. Oddly, we can’t find much mention from actual owners complaining of vibration, we can only assume they knew what they were getting themselves in for. The early 750 motors are also said to have a penchant for grenading.

As you’d expect from a scaled-up dirt bike, the DR appears to be far more capable off-road than contemporaries like the Honda Africa Twin or even the Yamaha Super Tenere. Watching it in this video, it appears to do very dirt bike-like things while emitting an unholy racket.

Oddly, there's no word as to what Suzuki was thinking with the pointless-front-mudguard-thing or if it fully realized the evil it was releasing on the world when it first thought that such a device would enhance faux-dirt cred.

The DR was never officially imported to the States, although it appears a few have made their way here and is significant mostly as a footnote in adventure touring history. Big demonstrates what it would have been like had the class evolved more in the direction of large dirt bikes and less in the direction of tourers with knobby tires. Allegedly, the DR was produced until 1999 and has now been replaced in Suzuki’s range by the V-strom, a bike finally serving as a home for the utterly awesome, yet ill-fated TL v-twin. Doctor Big will always be remembered as the reason Triumph definitely didn’t just copy the F800GS.