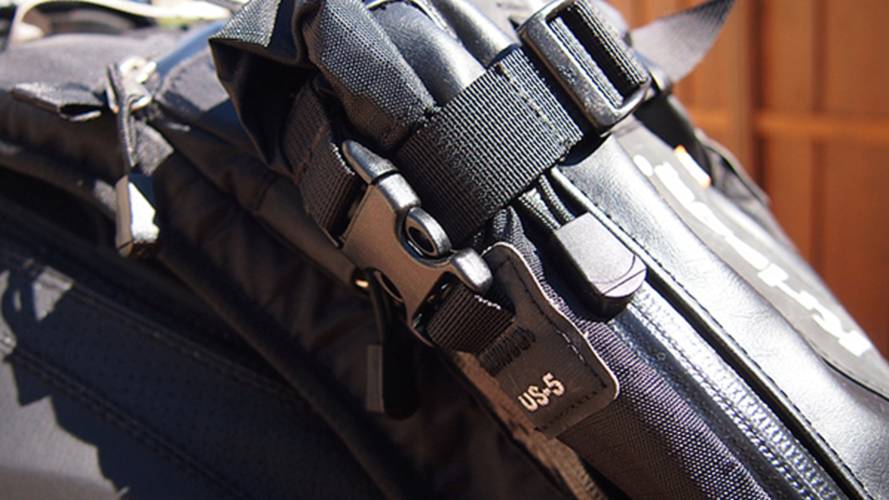 It’s hot in Southern California, so riding a bike for long periods of time requires drinking a lot of water. The Italian gentleman who hand-stitched my one-off Icon one-piece didn’t include pockets, but I need to carry stuff like a wallet, phone and maybe even a few tools. The solution to both problems? A Kriega Hydro-3 Enduro backpack and US-5 drypack that straps onto the back. It’s small and clever enough that, even fully loaded with 6.6lbs of water and probably the same in tools and credit cards, I can barely tell I’m wearing it and it doesn’t impact my ability to ride fast nor my endurance. Both items are also so well made that they’ll survive years of abuse, even on my crash-prone back.

Here’s the thing about the Hydro-3: it costs $129. The US-5 drypack that straps on the back is an additional $49. $178 for a hydration/storage system when Camelbaks start at $40? How does Kriega justify the cost?

Using a very tough Hydrapak zip-close reservoir, the Hydro-3 can hold up to 3 liters of water. That’s more than enough for a full-day of street riding or just about right for an entire day off-road.

The Hydro-3 incorporates around 1-liter of storage in a flat pocket at the rear, accessed through a rubberized water-resistant, vertical side zipper. But, with the bladder completely full, squeezing in much more than a wallet and phone isn’t realistic.

Either a US-5 or US-10 (as their names suggest, 5 or 10 liters of volume) drypack can be installed on the rear of the Hydro-3. Those enhance convenience as well as storage. The US-5 that I’m using lies completely flat when it’s empty, but lets me easily dump stuff into it by the handful by simply unsnapping two clips.

An external bungee web makes strapping on awkwardly shaped items easy. It’s perfect for a spare visor in a cover or sock, for example.

There isn’t a single seam on either the Hydro-3 or US-5 that isn’t heavily reinforced in some way. Most of the construction is thick, double layer and rubberized panels cover areas prone to abrasion. Straps are thick and sturdy, buckles are the same, zippers are heavy duty YKK items and rubberized to seal out water. That’s not even enough for the external side zippers, which disappear into little hoods a the top to further keep out rain. I’m reminded of a clitoris, but that’s probably too graphic a description to make here. Even the hose — just a bit of hollow rubber straw on other hydration packs — is here a heavily rubber-coated, very thick piece of pipe. You’re never going to wear it out or cut a hole in it and that coating serves as insulation, keeping your next sip cool as it sits over your shoulder.

The quality of all Kriega’s gear was driven home last summer, when we used a US-30 system on our trip across Labrador. It got dirty, wet and crashed on. I spilled gas on it and used it as a pillow every night for two weeks, but it still looks and works like new.

Even if I had no use for such thinking, the execution of the Hydro-3 and US-5 would make a case for ownership based solely on the enjoyment admiring them brings. Clearly the product of someone who has spent many, many miles on a bikes with inadequate equipment, both items are slathered with clever solutions to problems I didn’t know existed.

Start with the shoulder straps. They’re adjustable in length to accommodate different size torsos. You know they come preset at an average-size level two because two white dots stitched into the webbing tell you so. You can feed the straps back into the pack’s body to shorten them, or pull them out to lengthen, stopping at dots one or three. These markers also assure both sides remain even. Because they feed into the pack’s insides, behind the hydration reservoir, there’s no bunching or excess material.

Then there’s the quick-release front buckle. It’s immediately easy to locate and snap closed by feel, while a push from one finger is enough to open it. Despite that, it remains closed even as you twist and contort your body inside it. The round configuration also serves as a pivot for the harness, allowing freedom of movement.

Built in loops enable you to strap on the US-5 in a manner that won’t allow it to sag or come loose and its straps are retained by dinky little clips, stopping them from waiving around in the wind.

The inside of that US-5 is a velcro-attached white liner. Open the bag and it’s easy to locate that small, dark item in the bottom. If the white gets dirty, velcro it out and wash it.

The hose is retained on the shoulder strap by a loop of velcro. It doesn’t look like much, but it is simultaneously capable of holding that hose on at 130mph+ and detaching instantly to grab a sip.

Hit the button to quick release the hose from the hydration reservoir and you lose only a single drop of water. That Hydrapak itself is a pleasure to behold, it seals with a plastic clip that slides across its top, sealing it completely. Open it up and you have a huge mouth with which to pour in water without spilling. They Hydro-3 is absolutely perfectly sized to the Hydrapak.

I carried all this on my first ride with the system, just to see if it could handle the weight. Typically, I wouldn’t carry two multi-tools, a foot pump, a tire repair kit, a wallet, a phone etc for a quick street ride. But now I can if I want to and I could have added my Doc Allen socket set, if I could find it.

Actually, that ride wasn’t quick. I had to ride all the way from Hollywood to Huntington Beach to return a Norge and pick up the RSV4. Then, I decided to head over to San Gabriel Canyon to visit my friend Adam at Crystal Lake Cafe to tell him I’d set up his Google Places page. At least that was my excuse for an afternoon spent hooning. All-in, that was about a six-hour ride and I never felt the 12+ pounds on my back. Not once.

How is the Kriega so comfortable? It uses a modified version of the R35’s Quadloc harness to remove the weight from your shoulders and reposition the load paths so they pull through your chest. This leaves your shoulders absolutely free of weight and unrestricted in movement. A revelation if you’re used to riding with traditional packs.

The harness also retains the pack’s position on your back even at extreme speeds, lean angles and while transitioning body position side to side. Aside from the ability to drink when you feel like it, you just don’t know you’re wearing the Hydro-3.

As an added bonus, it works perfectly with my Icon one-piece. The pack is slim enough in width that it doesn’t block the suit’s perforations and because I didn’t spec an aero-hump, the pack is free to lie flat on my back. The design of the shoulder straps, their deep cut and the position of the pack would likely work fine with smaller aero-humps, like the kind used by Alpinestars.

The pack comes with waist straps that are more for securing the load than they are for bearing weight. I found the harness to be more than sufficient and the waist straps annoying, so I removed them.

The rip-stop nylon, rubber panels, chunky straps and harness lend it an air of menacing function that just somehow seems too evocative of technology and speed for a mere hydration pack.

Kriega also needs to be commended for its relatively minimal use of logos and its clean integration of them. Each one is reflective too, complementing the other reflective panels and grab strap.

It’s amazing how practical and versatile the ability to carry a little bit of water and a little bit of gear becomes. I got these because I needed water and storage when riding sportsbikes, but the system is going to be equally practical off-road or in individual pieces. Even on the bicycle I use to keep in shape for real riding.

Off-road, the benefits of hydration are obvious, as is the comfort and the ability to retain all that water and weight securely over jumps and whatnot. US-5s are also popular mudguard and seat bags, allowing riders to securely strap tools and other necessities on and keep them dry.

On a bicycle, the benefits of the ventilation-promoting liner inside the pack’s back and shoulders will come into play. It frees a 5mm airspace wherever it touches, meaning it shouldn’t contribute to huge sweat patches.

Hell, I’ve even pressed my US-10 into backpacking duty, where it serves as a waterproof compression sack for my down sleeping bag. Down is smaller in volume and warmer than man-made insulation, but loses its warmth if it gets wet. The US-10 means I don’t need to worry about that, even neck deep in water.

Mostly, I plan to wear the Hydro-3 whenever I need a hydration system. I’ll leave the US-5 strapped on, mostly empty. It lies flat, doesn’t add any weight and doesn’t flap around, so there’s no penalty to doing so. Then, if I need a little extra storage along the way, I’ve got it. If I need more room, I’ll just wear my R35 backpack and throw the hydration reservoir in the external sleeve pocket, where it’ll work just as well.

Talking to Sean the other night, I realized that the conclusion we need to draw about this Hydro-3/US-5 system isn’t that its perfectly suited to life on a bike, but rather, that it’s really fucking cool that we do stuff that necessitates equipment like this. Riding a bike elevates you above the huddled masses of sheeple in SUVs, a point that’s driven home by the quality, ruggedness, usefulness and looks of Kriega luggage.