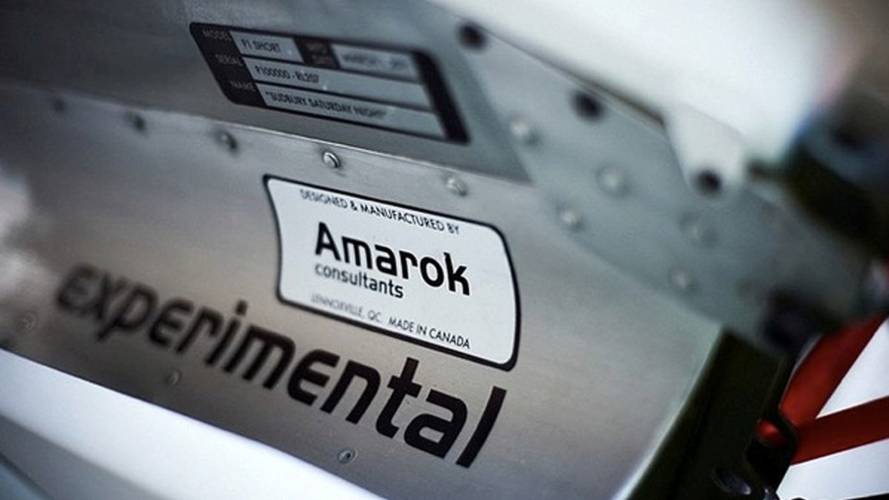 Two weeks ago, HFL contributor and motorcycle designer Michael Uhlarik showed you the first images of his new motorcycle, the Amarok P1 TTXGP competitor. Unlike most other electric racers, it's pursuing a radically reduced weight over high power output and huge battery capacity, something Michael hopes will endow it with 250GP-like performance and handling. Now, here’s an in depth look at the fi...

Two weeks ago, HFL contributor and motorcycle designer Michael Uhlarik showed you the first images of his new motorcycle, the Amarok P1 TTXGP competitor. Unlike most other electric racers, it's pursuing a radically reduced weight over high power output and huge battery capacity, something Michael hopes will endow it with 250GP-like performance and handling. Now, here’s an in depth look at the finished product.

Built in the 140-year old garage behind Michael’s Sherbrooke, Quebec home and designed by hand on his coffee table, the P1 weighs just 147kgs/325lbs ready to race. The next lightest competitor, the eCRP 1.4, weighs 160kgs/353lbs.

But, where that bike adapts a conventional ICE frame to the job of housing batteries and twin Agnis, Michael has taken an all-new approach, designing an integrated monocoque that’s at once the battery pack, frame and aerodynamic body.

“Since the 1930's, airplanes have relied on all-stressed skin, aluminum monocoques for superior strength, lower weight and packaging efficiency,” explains Michael. “Batteries already have strong and bulky structures, so why not design them into shapes that give them enough strength to support the entire motorcycle and rider vehicle system, while sculpting them into an aerodynamic package?”

With the help of his partner and chief fabricator, Kevin O’Neil, Michael designed the P1 by hand rather than employing contemporary (and expensive) CAD/CAM tools. “The DeHavilland Mosquito was made of plywood and glue, using (by today's standards) low precision tools, and resulted in one of the highest performance fighter/bombers of the Second World War,” says Michael. “The DeHavilland Beaver and Twin Otter bush planes are legends of durability, handling and simple construction, that have plied the north country for decades. Like so many products of Canada, their strength is in intelligent application of the simplest technology necessary to achieve design targets.”

But Amarok has departed from convention in more than just the monocoque battery/frame/body. check out the Hossack-style front suspension and the lack of a conventional rear brake disc.

Michael explains, “The Hossack front suspension system is a solution that mates perfectly with a fuselage type chassis, because it allows forces to be distributed more evenly across a wider load area. Basically, traditional forks, as amazing as they have evolved to be, act like a very long vertical lever, which puts tremendous strain on the head tube area of a conventional frame. Compensating for this means structural reenforcement, which adds weight.  Our solution spreads the work in a manner that is less stressful on the fuselage, thus allowing for less materials to do the same job, saving weight.”

“Our rear brake solution was to place it on the drive shaft that connects the two motors.  This way, it moves mass towards the centre of the rolling axis (for better cornering), eliminates some unsprung weight on the rear wheel system (something that radically improves suspension performance) and because the brake rotor is spinning the same high speed as the motors, we can use a much smaller diameter disc to get the same braking performance.  Its a clean, aerodynamically neat solution that does many things at once.”

“In the end, we are all about radical weight savings, by playing with component architecture, and making parts do as many tasks as possible.”

Michael’s being cagey about performance figures, but the P1 appears to stack up well to existing competitors. It carries the same amount of batteries (7.5kWh) and same twin-Agni 95 motors as the Mavizen TTX02, yet that bike weighs 170kg/375lbs. The Mavizen claims 100bhp and 77lb/ft of torque.

It’s bikes like that one, in the 7.5kWh class, with which Amarok hopes to be competitive in this year’s North American TTXGP series. Behemoths like the the MotoCzysz E1pc, Mission R and Brammo Empulse RR weigh 500lbs+, are much more powerful and carry 12kWh of batteries or more, plus liquid-cooled motors. Perhaps tellingly, Amarok is the only team that’s been able to adapt a ground-up design to the cheaper class.

Michael realizes where he sits in the field. “ This season, we are being realistic about our competitive expectations. After all, we have an all new vehicle system, and have taken some bold decisions on the design. By the end of the year, I expect to be among the best performing AGNI powered bikes, and hopefully best-in-class in the 7.5 kWh category. We won't be the fastest down any straights, but it is our goal to be the fastest in and out of the corners.”

The P1 is only the start of Amarok's racing program. Next year they hope to achieve full 250GP power-to-weight parity with the P2, which will weigh in at just 275lbs.

You can read more about the Amarok P1 at Wired.com, in Michael’s original Amarok manifesto and at the Amarok Racing website.