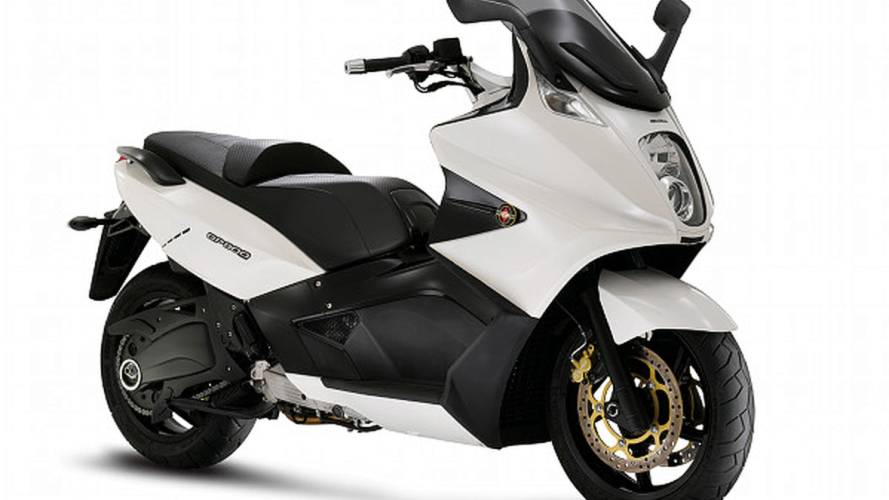 Who asked for this?

So you’ve got a scooter brand no one in the modern world has ever heard of. That scooter brand just so happens to have a very unique, very special product which really deserves to find a wider audience. What do you do? If you’re Piaggio, you rebrand that scooter with a name people have heard of and you don’t stop there, you give it a radical facelift to equip it with the looks of your flagship superbike. Then, you have the Aprilia SRV850, the new most powerful scooter in the world. It just leaked.

Equipped with the same 839cc, liquid-cooled v-twin and CVT transmission as the Aprilia Mana, the Gilera GP800 makes 75bhp and 54lb/ft of torque. That’s a LOT for a scooter; in comparison the Piaggio MP3 500 makes just 40bhp. Unfortunately, it has to move a lot of weight — 235kg/518lbs (dry), in fact. That’s two pounds heavier than a Mana in running order, fully filled with fuel. Still, that power is good for a top speed in excess of 120mph. It should be fairly stable at such speeds too, wheels grow to nearly motorcycle-size; 16” up front and 15” rear.

Maxi scooters like the GP800 or, say, the 2012 Yamaha TMAX are massively popular in Europe where they offer commuters the traditional scooter attributes of extreme ease of use and high practicality, but add highway-level speeds and huge weather protection. They look a little dorky to American bikers, who ride for leisure rather than utility, but they’re actually awesome products. Imagine cruising to work on something that keeps you mostly dry when it rains, can hold its own in the fast lane, stores a week’s shopping dry and safe under the seat and that you can bust traffic on without getting a sore left hand. In fact, no part of you is sore because the riding position is relaxed and the seat is like a lounge chair. They’re sort of like mini Goldwings.

The GP800 has the most epic set of exhaust pipes ever fitted to a stock scooter. Let's hope they're carried over the SRV.

Piaggio has gone to extraordinary lengths restyling the GP800-cum-SRV850; grafting on not only the RSV4’s lights and nose, but also lookalike mirrors fitted with indicators and even a tail fitted with the 45-degree winglets. What they haven’t done is made an evident mechanical changes; forks, brakes, wheels and chassis all appear identical to the donor Gilera. Details are still a bit scant, this image appeared briefly this morning on Piaggio’s press site with no details. It’s now been removed.

Will the SRV850 make it to the states? Well, we don’t get Gilera, but we do get Aprilia. Having said that, the motorcycle market here is vastly different than in Europe. Selling a dorky scooter that looks similar to its flagship superbike would likely hurt sales of the latter while achieving very few sales of the former. Big scooters just aren’t populare in the land of riding as recreation. The fact that other Gileras like the Fuoco 500ie have been rebranded as Piaggios like the MP3 500 for the American market is indicative of the brand separation that occurs here. You could hardly rebrand something with RSV4 headlights as a Piaggio though. The SRV850 also lacks that traditional unique selling point that can move scooters; it only manages 33mpg. For us Americans, this news is mostly going to be relevant as a what-the-RSV4-would-look-like-if-it-let-itself-go.